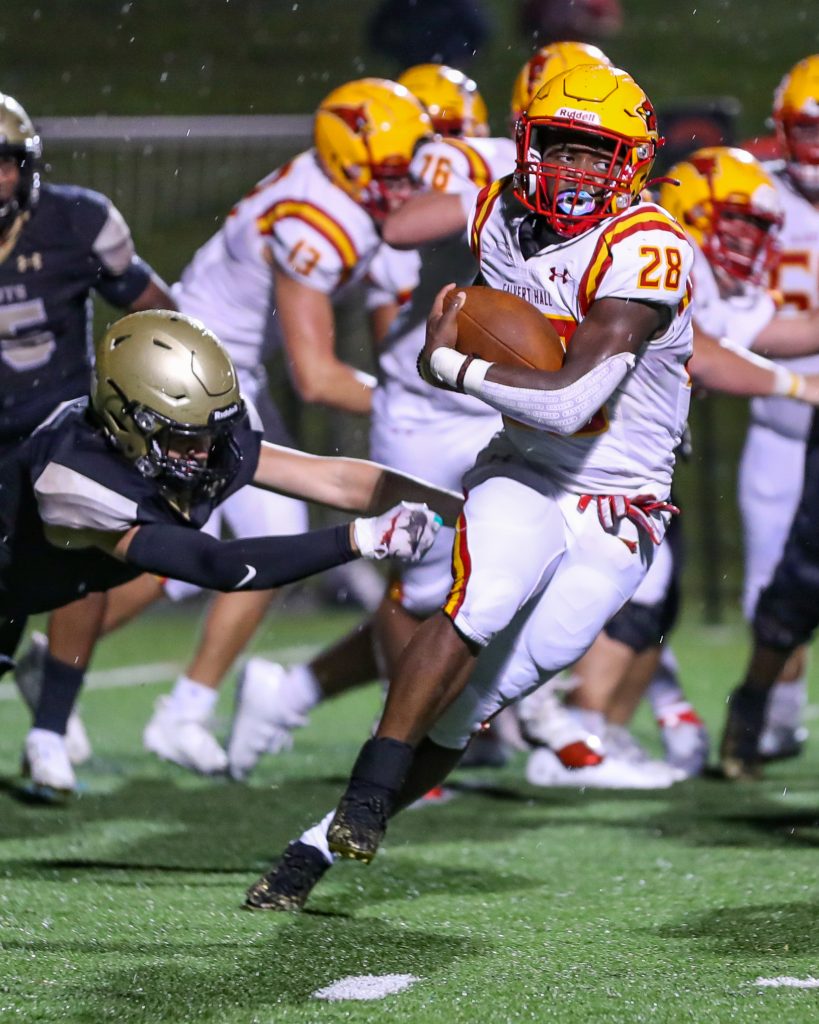 by Derek Toney
With a combined three games played in 2020, Calvert Hall College and John Carroll School were more than anxious to make their 2021 football debut Friday evening. A 90-minute kickoff delay because of weather and stoppage later didn’t lessen the excitement.
In the first MIAA contest in 649 days, the Cardinals recorded a 34-14 victory over the Patriots in damp Churchville. Daniel Harper rushed for two touchdowns for Calvert Hall, and junior quarterback Noah Brannock threw for two scores.
The Towson school shut out John Carroll in the second half, posting their first victory since a 33-10 victory over Loyola Blakefield in the Turkey Bowl at Unitas Stadium on Thanksgiving Day of 2019.
For The Hall, which played two games in the MIAA’s “open season” late last fall, it was appreciative of the moment Friday.
“In our meeting at school before the game, we talked about adversity and how you handle it…you’re going to have trials during the game and different times in life,” said Cardinals coach Josh Ward. “These guys for the last 15-18 months have gone through a lot. To get out here and have a full game in a normal year is a blessing.”
“It’s a huge blessing because COVID is still out here and still has a grip on the world right now,” said Harper. “Some of these guys, all they think about is football. I’m just glad for my teammates and my coaches and the parents, the students, everybody in the stands, I want to thank them. I’m also happy for them, they get to enjoy a good season of football again.”
Harper provided excitement, breaking off scoring runs of 79 and 46 yards. Brannock connected with Rakheem Smith for a 67-yard scoring play and Donnie Lewis on a 14-yard corner route in the second quarter, giving the Cardinals the lead for good.
Their defense, slashed by John Carroll’s offense in the first half, posted a shutout in the second half.
Ward, who got a water bucket dumping after collecting his first win as Cardinal coach, was happy to see his squad respond after waiting through a lighting delay, pushing the start time from 7 p.m. to 8:15 p.m. and a power outage in the second half, forcing a nearly 30-minute delay.
“It’s tough…some of these guys are playing a varsity game for the first time,” said Ward. “We preached adversity and the guys handled as much as they could in the first half and kind of bounced back. I’m proud of how they reacted.”
Calvert Hall needed just two plays to get settled as Smith got a step on his defender, hauled in Brannock’s toss and sprinted to the end zone. The Cardinals fumbled inside their 10 on their next possession and John Carroll took advantage.
Sophomore quarterback Ben Shutt called his number on three straight plays, the last from a yard out, putting the hosts ahead, 7-6 after the extra-point. The lead held for only two plays as Harper maintained his balance after slipping out of a tackle and went the remaining distance for a 79-yard touchdown.
John Carroll regained the lead early in the second quarter with quarterback DJ Fronek scoring from two yards. Fronek, who rotated behind center with Shutt and sophomore Luke Robinson Friday, keyed the five-play, 35-yard drive with a 17-yard pass to Jensen Perkovich on third down.
Calvert Hall answered with arguably its best drive of the new season. The Cardinals went 68 yards in 10 plays as Lewis brought in Brannock’s pass in the corner with 4 minutes, 37 seconds left before halftime.
The Hall’s defense completely turned momentum early in the second half. Junior defensive back KP Price knocked the ball from Patriot receiver Devin Rukowicz, and Jordan Jackson snatched it off the ground and went down the sidelines into the end zone, pushing Calvert Hall’s lead to 27-14.
Price added an interception late in the third, and senior Jack Tan recovered a fumble. Senior defensive end Daniel Owens had a pair of second half sacks.
Jackson, one of 32 underclassmen, said Calvert Hall had to work out some “jitters.”
“We came out unsure of ourselves. The second half, we had energy,” said Owens, one of the area’s top defensive stalwarts who’s down to Maryland, Penn State, Rutgers and Syracuse for college. “We stopped thinking and started playing football.”
It was “old times” also for John Carroll, playing its first official game since the 2019 MIAA B Conference semifinals (lost to St. Mary’s). The Patriots played one game during last fall’s MIAA “open season” where member schools, at their discretion, competed. No league standings were kept.
Patriots coach Ken Brinkman, whose team had one preseason scrimmage, “got a lot better,” playing MIAA A blueblood Calvert Hall.
“We made some mistakes, gave up some big plays, missed some tackles. It was 20-14 in the first half and we went toe-for-toe before the wheels fell off,“ said Brinkman.
Despite the loss, Brinkman saw many positives, especially defensively and the running game, heading into next weekend’s B Conference opener against Boys’ Latin.
“We’re playing football, and it feels so good,” said Brinkman. “Fingers crossed, we’ll get all 10 (games) in, but our guys are excited. They understand how important every game is because you never know.”
Calvert Hall College 34, John Carroll School 14
Calvert Hall 13 7 7 7 – 34
John Carroll 7 7 0 0 – 14
First quarter
Calvert Hall – Rahkeem Smith 67 pass from Noah Brannock (kick failed)
John Carroll – Ben Shutt 1 run (Mathias Mingle kick)
Calvert Hall – Daniel Harper 79 run (Andrew Petrino kick)
Second quarter
John Carroll – DJ Fronek 2 run (Mingle kick)
Calvert Hall – Donnie Lewis 14 pass from Brannock (Petrino kick)
Third quarter
Calvert Hall – Jordan Jackson 40 fumble return (Petrino kick)
Fourth quarter
Calvert Hall – Harper 46 run (Petrino kick)