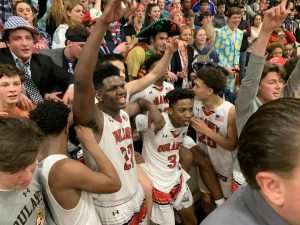 Dulaney basketball players celebrate with their fans after Friday’s victory over Springbrook. The No. 9 Lions rallied for a 70-68 decision over the Montgomery County for the Class 4A North Region title and first state Final Four berth in 42 years.

It wasn’t a secret expectations were astronomical for Dulaney High boys basketball going into the winter. With the nucleus back from a team that took eventual two-time Class 4A state champ Perry Hall to the final seconds last postseason, the Lions fancied themselves as Baltimore County and 4A state title contenders.

But, after back-to-back losses in January, the Lions’ county title hopes disappeared. Trailing by double-digits on its home court in the second half of Friday’s North Region championship match, a season of promise was fading into oblivion.

After falling short in big spots the last several seasons, Dulaney finally showed the resilience of a champion. The ninth-ranked Lions defeated Montgomery County’s Springbrook, 70-68, in front of a raucous capacity audience in Timonium.

For the first time since 1977, when Jimmy Carter was President, a little movie called Star Wars was released and the first Apple computer went on sale, Dulaney basketball is headed to the state Final Four. The Lions will take on Prince George’s County’s Eleanor Roosevelt, Thursday at 9 p.m. at the University of Maryland.

“We worked so hard for this. Everybody doubted us,” said Dulaney junior forward Cam Byers.

The nay-sayers were out in force after the Lions were dismantled at home by eventual county champ New Town. A couple of days later, the Lions lost at Dundalk.

“For a young team like us that’s exactly what we needed,” said Lions coach Matt Lochte. “In the middle of the season to get punched in the mouth, not just by New Town, but also Dundalk. We dealt with some adversity.”

“We fought through adversity. We needed those two losses,” said Conway. “I feel like we learned what we shouldn’t do and that’s what prepared us for this.”

Junior forward Che Evans’ basket with 2:22 left in regulation completed a 15-4 closing run by the Lions, who trailed by 10 points late in third quarter and nine with 5:43 remaining in regulation. They held on through the frantic minutes to claim their biggest victory in decades.

“We didn’t finished it out so we’ve been through adversity before. We knew if we give up our season would be over,” sad Byers. “I wasn’t ready to give up.”

Byers, a transfer from John Carroll School, aided Friday’s comeback, sticking a 3-pointer from the corner to pull the Lions to 66-62 with 4:44 left in regulation. Cornish dropped a mid-range jumper, making it 66-64.

Cameron Amoruso knocked the ball away from Hawkins, and got the ball to Byers who drove to the basket for a layup, tying the game with 3:42 to play. Conway, who was fouled on a 3-point attempt following another Springbrook turnover, converted two of three free throws, giving Dulaney a 68-66 lead.

Hawkins got Springbrook back even with a dunk. Evans drove the lane and put the ball off the glass, putting the Lions ahead for good.

With 47 seconds left, Evans captured Hawkins’ one-and-one free throw miss, but Byers missed a layup attempt off a baseline drive, giving Springbrook another chance with 19 seconds to play. Marcus Davis missed a jumper and Byers corralled the ball and was fouled with 2.4 seconds left.

Byers missed the front end of an one-and-one and Springbrook called timeout with 1.9 seconds left. The Blue Devils threw the inbound pass past midcourt where Cornish got a hand on it.

The ball hit the floor and the final buzzer sounded. And a celebration, 42 years in making, ensued.

Cornish, whose brother Josh was Baltimore County Player of the Year last season, overcame early foul trouble to score all 14 of his points in the second half. Josh, now a freshman at Southern Utah College, was in attendance Friday, and continues to be a mentor.

Lochte said Friday’s victory was for past Lion players. 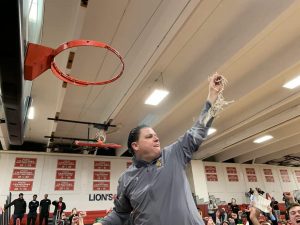 “This was not a normal game. All of the sudden a little adversity, a little foul trouble, you have to make adjustments and guys stepped up and made plays. I’m super proud of them,” said Lochte.  “We talked last night [Thursday] about let’s earn the right to practice again.

So we’re practicing tomorrow morning. We’ll practice Monday, Tuesday and Wednesday, then we’re down to College Park 9 o’clock on Thursday.”