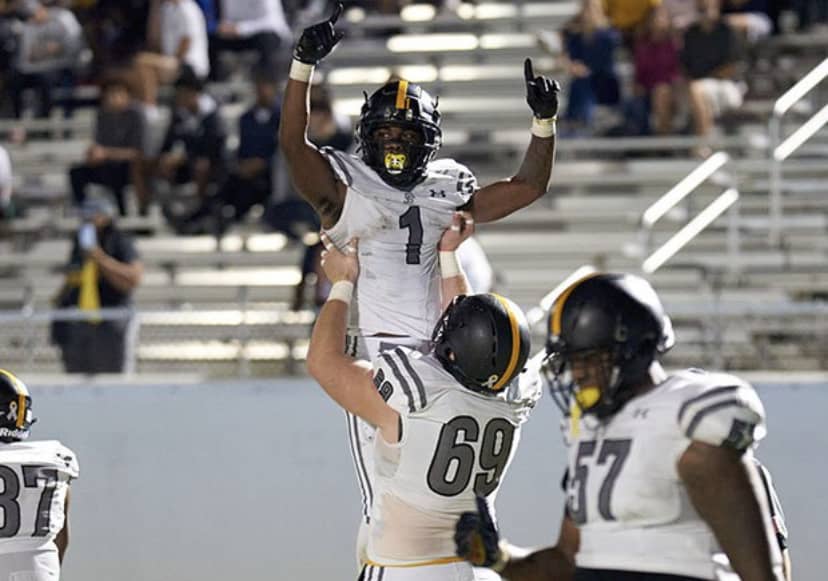 St. Frances’ Lamar Patterson (1) lifted up by teammate Jacob Sacra after scoring a touchdown in the second quarter of Friday’s football contest against IMG Academy. The area’s No. 1 Panthers ended their season with a 34-24 victory over nation’s third-ranked IMG in Florida.

St. Frances Academy football started its season with a disappointing showing in Florida.

The East Baltimore school (7-1 overall), ranked No. 15 nationally in USA TODAY’s Super 25, built a 26-3 first half lead before withstanding an Ascenders rally, handing the nation’s third-ranked team its first home loss since 2014.

The Panthers opened their season with a loss to St. Aquinas Thomas (ranked 14th in Super 25) back in September.

“The guys were prepared mentally…they left with a bad taste in their mouths,” said St. Frances coach Messay Hailemariam, referring to the 38-23 loss to Aquinas. “Some of the guys didn’t know about what level of play you have to have. That experience led to success.”

The East Chase Street school were near-flawless in the first half. Durrell Robinson blazed 62 yards down the sidelines for the Panthers’ first score.

St. Frances answered on the ensuing drive as Nicholas Harris’ 4-yard run, combined with Michael Van Buren’s 2-point conversion pass to Lamar Patterson, pushed the Panthers’ lead back into double-digits at 34-24 late in the third quarter.

St. Frances’ defense kept IMG Academy from threatening, turning the Ascenders away on 4th down with 4:22 left in regulation.

The Panthers ran out the remaining time, and celebrated a second straight victory over the Florida prep powerhouse. In 2019, St. Frances routed IMG, 35-7, at Morgan State University.

IMG ran off 19 straight wins before Friday. In the 2016 season finale, IMG defeated St. Frances Academy, 38-0, after the Panthers secured the first of three straight MIAA A Conference titles.

Playing IMG Academy, once known as a training school for aspiring tennis players, has been the measuring stick for St. Frances, which has morphed into one of the nation’s elite programs.

“Our guys executed and put it together,” said Hailemariam. “I’m humbled by how we played.”

“You can make mistakes but against the likes of Aquinas, De La Salle, IMG, they’re glaring,” said Hailemariam. “They were extremely locked in and focused.”

Hailemariam, who returned as coach after co-coaches Biff Poggi left to be a consultant at Michigan and Henry Russell stepped down to launch a business, admitted he made mistakes, like deciding to throw the ball with seconds left in the first half Friday up two scores.

Griffith was sacked, and fumbled and IMG turned it into a touchdown and 2-point conversion.

“I was trying to be aggressive,” said Hailemariam, who served as Director of Operations the previous four seasons after guiding St. Frances into the MIAA A Conference. “I told the kids before the game we weren’t underdogs.”

After separating from the MIAA A in 2018, St. Frances is hoping for a return in 2022. Hailemariam said he and athletic Nick Myles presented a proposal to the MIAA where the school would have a national and varsity squad, with the latter playing in the A Conference.

The Panthers have played as an independent since 2018 after, in the spring of 2018, fellow A Conference schools declined to play them, citing safety and competitive imbalance concerns.

“It was bad publicity for all involved,” said Hailemariam. “Hopefully we’ll work out something that makes sense for everyone.”