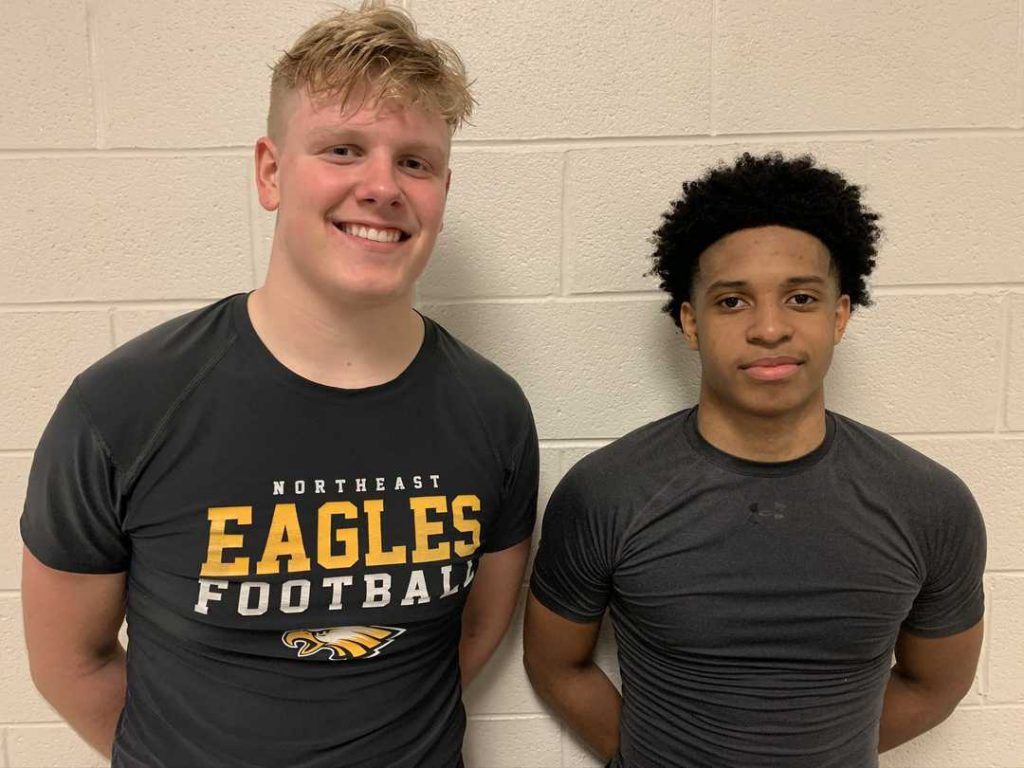 North County High and Northeast struggled mightily against zone defenses for the first three quarters of their early-season encounter for boys basketball supremacy in Anne Arundel County on Friday night in Glen Burnie.

Only one of those teams — the Eagles from Pasadena — solved the 2-3 alignment in time to walk away with a victory to gain the upper hand in the county.

Mired in a 28-28 deadlock after three quarters, Northeast opened the final frame with an 18-3 run to prevail, 48-37, and remain unbeaten in league play with a 4-0 mark. The Eagles are tied with No. 19 Annapolis and South River for first in Anne Arundel.

The Eagles (8-1 overall) finally got untracked when Jaylon Albury started the explosion on an old-school 3-point play after he was fouled on a stick-back and converted the ensuing free throw.

The 5-foot-11 senior guard wasn’t through.

After junior forward Stephen Haley sank another foul shot, Albury wiggled his way through several defenders in the paint for a layup to stretch the lead to 35-28.

Just like that, the Eagles were in command, 40-29, with just under three minutes left in regulation.

With Haley owning the left block and Albury orchestrating the offense from the perimeter, any hope for a North County comeback became more remote.

The fourth quarter outburst was in stark contrast to the first three quarters when those zone defenses had both teams totally flummoxed.

Haley said that the Eagles weren’t getting good shot early.

“Then we found a niche,” he added. “And we were being more patient with the ball.”

Northeast coach Roger O’Dea said that he was expecting to face a zone, considering that Arundel also threw the Eagles off-balance with a similar ploy recently.

“We struggled tonight and we struggled against Arundel, too,” he said. “It took away some of our intensity and we couldn’t get out in transition. But then in the fourth quarter, that was just Jaylon Albury just taking over the game. I think he’s the top player in the county.”

On the other hand, O’Dea was pleased with how his 2-3 zone worked against the Knights, who lost for the first time this winter after opening the season with six straight wins.

North County coach Trumaine Johnson said employing a zone was a no-brainer for his young team.

“They have exceptional drivers,” Johnson said about the Eagles. “We just felt if we held them off a little, we would have a chance. But then they figured it out and their big man (Haley) hurts us in the fourth quarter. And their zone hurt us, too. It allowed them to dictate the pace and to contain what we like to do.”

That said, Johnson and his Knights (6-1, 3-1 Anne Arundel) still have a lot to play for, considering that they have already two more wins than they had all of last year.

“We were 4-19 last year, so we didn’t know where we’d be at this point of this season,” he said. “This is a lesson learned. Nobody expects us to be in this position, but the guys have really gone to get after it. We just have to continue to grow and get better.”