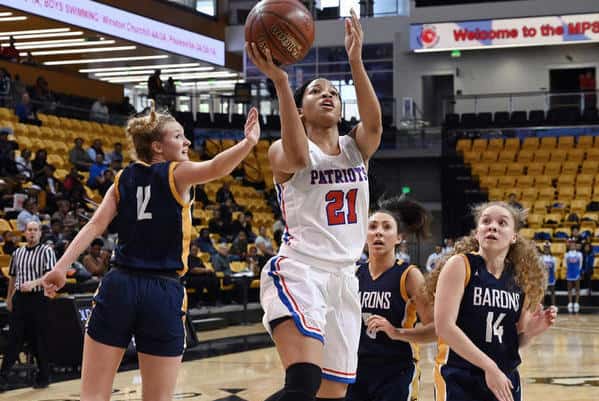 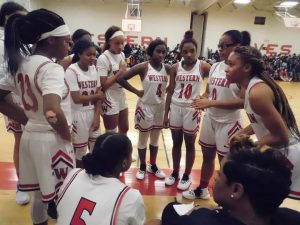 Western was unable to capture its first state girls basketball title since 1995 Thursday. The No. 5 Doves lost to Prince George’s County’s Charles H. Flowers in the 4A state semifinals at Towson University.

Trailing in the fourth quarter of Thursday’s Class 4A state girls’ basketball semifinal, Old Mill High’s title drought would continue for another year. But in a season where the Patriots has had to fight to keep their stature among the area’s best, they found a way.

Now, a championship is within their grasp. The No. 6 Patriots defeated Montgomery County’s Bethesda-Chevy Chase, 57-55, at Towson University’s SECU Arena.

The wait continues for No. 5 Western, which dropped a 53-49 decision to Prince George’s County’s Charles H. Flowers in the first 4A final four contest. Kaliyah Harris recorded game highs with 24 points, 14 rebounds and four assists for the Jaguars.

Despite several injuries, Western battled the entire 32 minutes. In the end, the Doves (22-5 overall) will have to wait another season to win their first state title since 1995.

Sophomore guard Vashae Rideout suffered what looked to be a minor head injury in the second half, but returned and finished with 10 points, 10 rebounds and two assists to lead the Doves. In addition, guard Gabrielle Johnson had to leave in the fourth quarter with a knee injury.

“We played hard through the whole game. I just feel like the refs took that game,” said Pryor, who finished with eight points and three rebounds. “We were playing through it the whole time, even with our injuries.”

“I think the girls just started getting antsy, not knowing where it was going to come from,” said Townsend, whose team reached their first state Final Four since 2016 “We just couldn’t get in that rhythm, and I think that’s all it was.”

With a young roster, Western showed tremendous growth this season. The Doves will have most of their roster back next winter.

“The girls fought [through], and they play through adversity,” said Townsend. “My goal is for them to play hard… and that’s what they did.”

Old Mill is a win away from its first state title since 1993 after rallying past Bethesda-Chevy Chase.

Niagara University-recruit Sydney Faulcon recorded 13 points and 12 rebounds while Deja Atkinson made 7 of 8 vital free throws to finish with 13 points and eight boards for the Patriots (22-4).

The Anne Arundel County champs outscored the Barons, 16-8, over the final 4 minutes, 40 seconds of regulation to earn its first state final since 1993 when they completed a 3-peat in 4A. Old Mill plays Charles H. Flowers Saturday afternoon at SECU Arena.

Trailing 48-41, Old Mill’s comeback began with a steal and an and-one layup by Mikayah Mallett. The next time down the floor, Faulcon got a put-back lay-in to tie the game as the crowd erupted.

The Patriots got another defensive stop, leading to a 3-pointer by Destiny Galloway to help her team go up, 51-48, capping off a 10-0 scoring run in a span of a minute and a half. Old Mill led 54-52, with a minute left in regulation.

The Patriots made a couple of more defensive stops with Atkinson grabbing some crucial rebounds. Atkinson, the hero in Old Mill’s Anne Arundel County final win over South River a couple of weeks ago, nailed some crucial free throws to put the Patriots up 57-52 with 34 seconds left.

Lily Roberson hit a 3-pointer, bringing Bethesda-Chevy Chase (18-9) to 57-55. The Patriots turned the ball over on the ensuing inbounds, but the Barons weren’t able to take advantage. 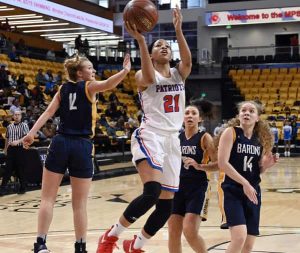 Old Mill’s Deja Atkinson attempts a shot during Thursday’s Class 4A state girls basketball contest. Atkinson finished with 13 points as the No. 6 Patriots advanced to the state final with a 57-55 victory over Montgomery County’s Bethesda-Chevy Chase at Towson University’s SECU Arena.

The Patriots gave the Barons another opportunity after missing two free throws with 9.1 seconds left. Bethesda-CC, ranked No. 20 in the District region, quickly advanced the ball up the floor and Merete Cowles’ one-handed runner bounced off the rim as time expired.

“We all stepped up to be honest. It wasn’t one person. It was definitely a team effort,” said Atkinson, who added six steals.

The Patriots have won several tight matches in recent weeks. They’re hoping another effort will finally bring a state title back to Millersville.

“They put forth the effort and it’s like when they’re down, they don’t worry about it,” said Smith. “They don’t fret. They pick each other up and they get after it.”