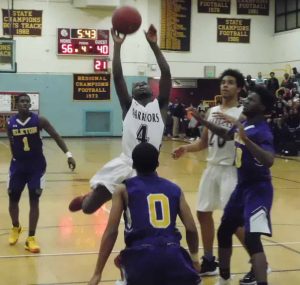 Havre de Grace’s Josiah Scott puts up a shot during Thursday’s evening UCBAC Susquehanna contest with Elkton. The junior guard scored 13 of his team-high 19 points in the opening half as the 20th-ranked Warriors defeated the Elks, 74-58, in Harford County.

Now, they’re on verge of perfection.

Havre de Grace led by as many as 25 points, clinching the Susquehanna crown. The Warriors are the lone undefeated in the Baltimore region.

“I knew coming into the season we had some good basketball players and the potential to be good,” said Eberhardt. “I think we are pretty good.”

“Once you put in the hard work, you can do anything,” said Scott.

Scott set the tenor for Havre de Grace with 13 points in the opening quarter. The 5-foot-7 floor general had a stretch where he dropped a 3-pointer, stole the ball and went in uncontested for a layup and hit a mid-range jumper, turning a 7-5 deficit into a 12-7 advantage for the Warriors.

Havre de Grace never trailed again, connecting on seven 3-pointers in the opening half en route to a 38-22 advantage.

“My teammates were encouraging me to shoot. Once I hit one, it was time to let it fly,” said Scott. “Elkton kept fighting, but on any night, iany one of us could have a big night.”

The Elks got within 38-31 early in the third on a jumper from Da’Mear Triplett, but five three throws and a Marlon Lewis’ 3-pointer kicked Havre de Grace’s advantage back to double digits. Lewis converted two free throws after getting an offensive rebound off a missed throw and was fouled.

Lewis (14 points), a transfer from Woodlawn where he starred as a freshman last season, has provided a competitive edginess to the Warriors.

“I’m not surprised (being 19-0) because we played together AAU in the summer,” said Lewis, a 6-foot-4 forward. “You need chemistry so you don’t breakdown on the court.”

Havre de Grace opened up a 69-44 lead with three minutes left in regulation after Jordan White found an open Quinton Ware under the basket for a layup. Junior guard Gary Gibson (13 points) and also reached double figures) for the Warriors.

Junior guard Jaire Hoke’s banked 3-pointer at the buzzer was the difference for Havre de Grace in a thrilling 61-58 decision a couple of weeks ago at Elkton, propelling the Warriors into first in the Susquehanna. Outside of the opening couple of minutes and first three minutes in the second half, there wasn’t much drama in the rematch Thursday.

Farad Stevens finished with a game-high 25 points for Elkton (16-2, 10-2 Susquehanna), and Da’Mear Triplett added 12. The Cecil County squad didn’t have the services of guard Marquis Battle, who’s done for the season because of a school-related matter.

“We were hoping somebody would break in and make a difference and it didn’t happened. We played with the same intensity and formations, but that one person is key,” said Elks coach Charles Givens. “Even when we were coming back, I just think if he (Battle) was here, he would’ve put us in position.”

The Warriors are in position for a perfect regular season, with a road game Thursday at Rising Sun the final obstacle. Havre de Grace (won 16 games last season) is looking for a deep run in the upcoming postseason. 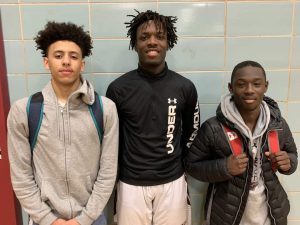 Havre de Grace, with Gary Gibson (left), Marlon Lewis and Josiah Scott, continued its breakout boys basketball season Thursday night. The No. 20 Warriors clinched first in the UCBAC Susquehanna with a 74-56 home victory over Elkton to improve to 19-0.

“We talked about the regular season being preparations for games after Feb. 14,” said Eberhardt, who guided the Warriors football team to back-to-back 1A state semifinals after reaching the 1A final in 2016. “We have a really tough section to get through. We make sure to remind the kids the regular season is great but that’s not going to hang a banner in the gym.”