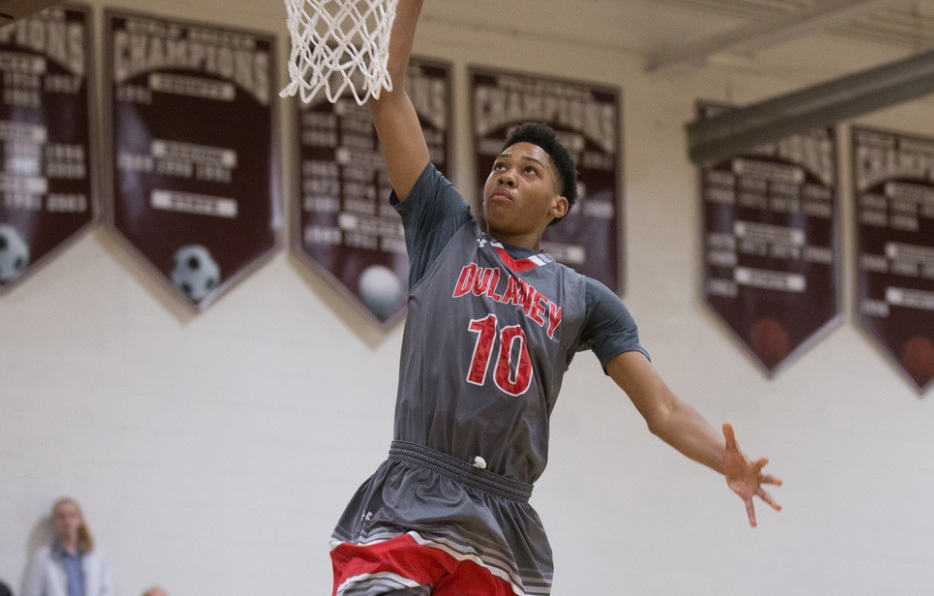 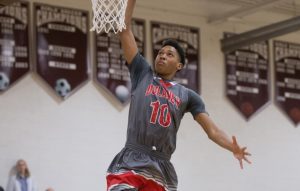 It was hard not to be in awe of Dulaney High boys’ basketball’s first half performance against upstart Parkville.

“In my 15 years of coaching here I can say that first half was outstanding play” Lions coach Matt Locthe said. “We really came together early and often and it showed.”

The No. 5 Lions led wire-to-wire, scoring 67 points in the first 16 minutes en route to a dominating 103-45 decision over the Knights in a Baltimore County Division I contest in Timonium. Four different Lions players finished in double figures before the intermission break with junior Che Evans scoring 16 of his game-high 33 points.

Ryan Conway and Cameron Byers both finished with 16 points apiece. Isaiah Cornish had 19 points as Dulaney made baskets with ease throughout the night, turning Knight miscues into high quality shots.

“We work so hard in practice and when we face teams that don’t have experience with us, we just jump on them early,” Evans said.

Dulaney (8-1 overall, 3-0 Division I) connected on five three-pointers in the first two minutes of action as Parkville tried to hang on early and survive the onslaught. Conway nailed his first three point attempts and Cornish drilled a right corner three and put the Lions up 9-2 from the offset.

Parkville junior Strickland, who had 12 points, and sophomore Kevin Kalu (11 points) kept the Knights within striking distance with several shots in the paint and trailed 12-6 with four minutes left in the opening quarter.

“We know that our pressure and our pace of play we just fatigue teams, not just physically but mentally,” Locthe said.

Dulaney kept pouring it on. Cornish, Byers and Evans propelled a 21-7 run to finish the quarter. The strong effort on both ends continued in the second half.

Parkville (8-3, 2-1 Division I), who came in Friday’s contest winners of their last three games, couldn’t break through the relentless full court pressure defense of Lions and committed 17 turnovers in the first half.

“For us it was more about the energy and the effort , the two things we stress is that if we are up 20 or down 20 we always give energy and effort,” Parkville coach Josh Czerski said. “We switched defenses on them three times in the first half, we did all we could do defensively, but they just hit shots when the wanted and pressured us into some bad shots.”

The Knights found a little bit of rhythm in the second half as junior John Godinez (12 points) scored on long jumpers along with shots from Strickland and Kalu. But the game was well out of Parkville’s reach.

“We haven’t a lot of chances to play at home this season, so we were just enjoying the fans and the atmosphere and that helped us,” Evans said.

Two 3-pointers from Ethan Anderson put the Lions over the century mark for the first time this season. The Lions have scored at least 87 points in each of their games against Baltimore County foes this year.

“We were hitting shots and pressure the ball 80 feet on defense we are hard to beat,” Locthe said.

The convincing win keeps Dulaney tied atop Division I standings with New Town. The Lions host the No. 7 Titans in two weeks, with the winner likely securing a spot in the league final next month at Towson University’s SECU Arena.

Next week, Dulaney visits Hereford, followed by matchups with defending state champs and perennial Baltimore City powers Dunbar (Class 1A) and No. 8 Lake Clifton (Class 2A) at the Basketball Academy at Morgan State’s Hill Field House.

“It’s back to hard work and getting after it in practice,” Evans Jr. said.