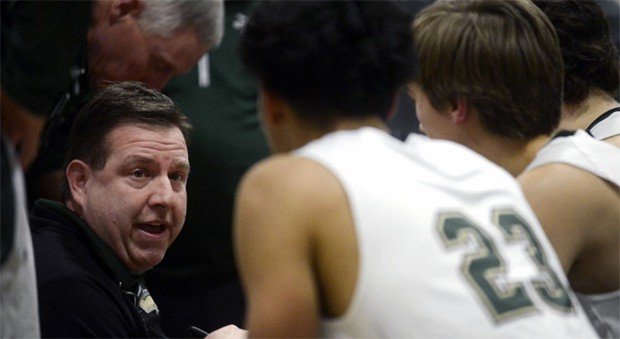 Century boys basketball coach George Wunder talks to his team during a timeout during a 2020 contest. The Knights improved to 4-0 with a 50-29 victory over Manchester Valley in Carroll County play Wednesday evening.

Century is scheduled to host rival Liberty Friday evening. The Sykesville school defeated the Lions, 56-49, in the season debut for both three weeks ago.

Winters Mill tasted victory for the first time with a 43-41 decision over South Carroll. Tyler Sabad and Josh Popielski combined for 23 points for the Falcons.

The Eldersburg school is slated to host Century Friday evening. Century improved to 6-1 with a 51-38 victory over Manchester Valley Wednesday evening.

Samantha Seledee (15), Caroline Little (13) and University of Maryland lacrosse recruit Demma Hall (13) finished in double figures for the Knights, who lost 56-31 to Liberty earlier this month.