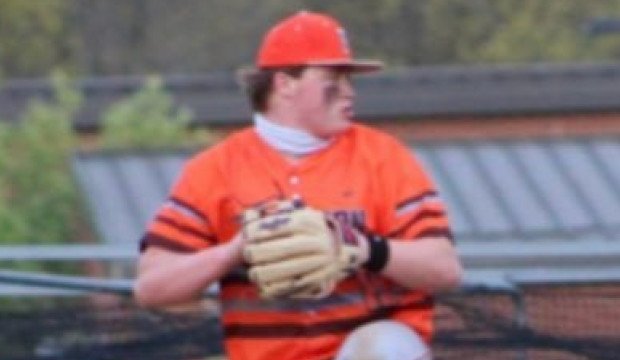 On a frigid afternoon, Fallston’s Finley Jourdan made sure host Bel Air’s bats were even colder as he no-hit the Bobcats to lead the Cougars to a 4-0 victory in their UCBAC’s Chesapeake Division league opener.

In the complete game effort, Jourdan struck out seven and walked four.

The Cougars (1-1 overall) got on the board in the second when Tony Sweitzer grounded into a fielder’s choice, scoring Jourdan, who doubled to start the inning. Nathan Slicher drove in the second run, in the 5th, with an RBI ground out. Jake Baugess Kimes added a clutch two-out two-run single, also in the 5th, to extend the lead to 4-0.

Pictured above: Fallston’s Finley Jourdan tossed a complete game no hitter and collected three his in the Cougars 4-0 UCBAC Chesapeake win over Bel Air, on Tuesday.