Fallston volleyball comes back to defeat Perryville on the road 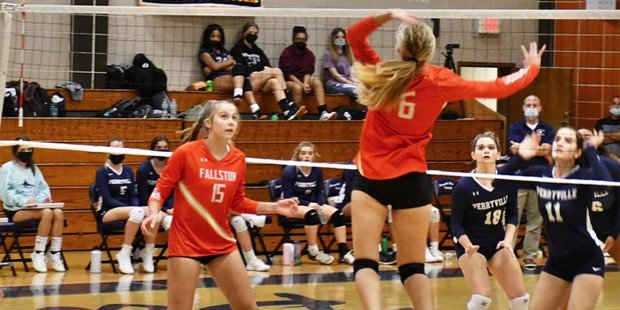 On the road in Cecil County, the Fallston volleyball team moved to 2-0 this season with 19-25, 25-23, 25-22, 25-19 come behind victory over Perryville, in an UCBAC Chesapeake Division match on Wednesday.
After a six-point loss in the first set, the Cougars battled their way to a pair of narrow set wins and then finished off the Panthers with a six-point win in the fourth set.
Kyra Douglass paced the Fallston attack with a team-high 13 kills and Ellery Thompson added seven for head coach Bill Stewart.
Allie Book and Samantha Conrad combined for 25 assists, while Abby Ruth had 17 digs and Amanda Sharpe produced 5 blocks. The Cougars also got three consecutive aces, off the bench, from Adrianna Fares to finish out the final set.
Fallston will play its home opener on Friday, hosting John Carroll in a non-conference match.
Photo courtesy of Cindy Jenkins Thompson.