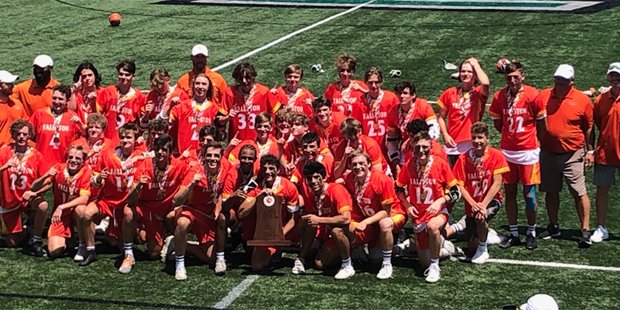 During the Class 1A playoffs, Fallston only had one relatively competitive game — a 12-7 triumph over Liberty — in four contests.

That said, the Cougars (10-1) had another battle on their hands against unheralded Smithsburg (10-2) in the state final Friday afternoon at the Loyola University Maryland’s Ridley Athletic Center. 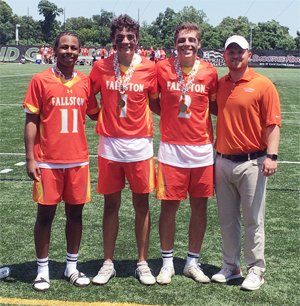 The Cougars, who outscored Patterson Mill, Havre de Grace and Perryville by a combined 54-11 in their other postseason encounters, appeared to be on their way to another rout when they jumped ahead of the Leopards, 6-2, early in the second quarter before finally fending off the Washington County school, 13-8, to claim the program’s sixth overall title and first since 2016.

Smithsburg, making its second appearance in the championship round since 2018, was bold enough to give Fallston some nervous moments in the third quarter until the Harford County squad ended the contest on a 4-1 run.

“We knew it would be a tough game,” said sensational sophomore face-off midfielder Aiden Dixon, who won 21-of-23 draws to give the Cougars plenty of possessions.

Although he was nearly perfect at the ‘X,’ Dixon said that he struggled to win face-offs cleanly in the early stages of the contest.

Nevertheless, his dominating play was a key to the win.

It looked like easy pickings early for the Cougars after senior attackman Peter Buckler, sophomore midfielder Lucas Hurlburt and Dixon staked them to a 3-0 first quarter advantage that was quickly sliced to 3-2 after Smithburg bounced back with a couple of goals.

Buckler scored twice during another three-goal spree to give Fallston a 6-2 edge before junior midfielder Alex Scholl converted an errant pass from senior attackman Will Nussear to cut the lead to 6-3 at the intermission.

The Leopards then scored three of the next four goals to make it 7-6 with just over eight minutes remaining in the third quarter.

A key save by senior goalie Jack Emmett, who wrapped up his high school career with nine saves, prevented Smithburg from drawing even.

An extra-man goal by freshman attackman Chris King, on a feed from Hurlburt, was the first step in the Cougars restoring order with senior midfielder Noah Richard upping the lead to 9-6 after his running right-hander rippled the net.

Although senior midfielder Aiden Ensor got one back for the Leopards, Hurlburt closed the quarter with his second tally to give Fallston a 10-7 cushion heading into the final period.

When Richard, assisted by sophomore Quinn McLaughlin, made it 11-7 with nine minutes to go, the separation the Cougars wanted was at hand.

It widened quickly to 12-7 on McLaughlin’s goal off a fast-break feed from junior midfielder Mike Estremsky as Fallston had the game in hand.

Smithburg junior attackman Ryan Linn struck to give the Leopards some faint hope until Buckler’s fifth goal sealed the deal in the final minutes.

Mull, who never hoisted a trophy during his Fallston playing days, said that he was very happy to win one in his first year as a head coach.

“It’s really something special to bring a championship back to my alma mater,” he said.

And Buckler was happy to have completed his career with a game-high five goals while being shadowed by a tough defenseman, Smithsburg sophomore Josh Hegbe.

“He was getting some pretty good checks on me,” Buckler said. “I had to make sure to change speeds and change direction. But I knew we would be mentally strong and I had full trust in my teammates.”

Emmett said that he was not surprised that Smithsburg’s offense was a challenge.

“We didn’t know much about them, but they had good players,” he said. “We pulled together in the third quarter.”