No. 2 Falcons advance to 4A East baseball final on Henson’s RBI single in 7th 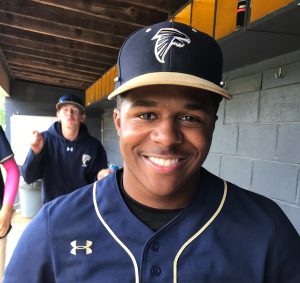 James Henson III kept Severna Park baseball’s championship hopes intact Saturday. The senior lined a RBI shot to left centerfield in the bottom of the seventh, giving the No. 2 Falcons a 6-5 victory over South River in a Class 4A East Region II semifinal.

James Henson III, who wasn’t supposed to play, drilled a shot to deep left-center in the bottom of the seventh to give second-ranked Severna Park High, a 6-5 victory over South River in the Class 4A East Region II baseball semifinals Saturday.

The home victory by the top-seeded Falcons (13-2-1 overall) advance them to Tuesday’s region final against Southern Maryland’s  Leonardtown, which ended fourth-ranked Broadneck’s season with an 8-3 decision in St. Mary’s County.

Henson’s shot, the first game ending hit of his career, turned what was a miserable afternoon for both teams, fans and parents into a joyous one for the victors. The contest was mostly played in a steady drizzle with light rain, at times.

There were 13 walks, six errors (two on one play) and several wild pitches due to slippery baseballs and wet field conditions.

According to Falcons coach Eric Milton and Henson’s father, James Henson II, Henson was not expected to play because of a pulled hip flexor that resulted in his being pulled early Tuesday in Severna Park’s Anne Arundel County title game victory over 10th-ranked Arundel.

”We rolled the dice and made sure he was all right to play today, and we put him in the lineup and it worked out for us, “ said Milton.

”We took him to therapy right away,” said James Henson II, crediting therapist Jennifer Angelas for getting his son healthy enough to play.

Henson III has been the Falcons’ extremely reliable centerfielder with a good arm, speed and a knack for reaching base out of the 9th slot in the batting order. He also had a bunt hit his first time up and has led his team in getting plucked by opposing pitchers over the last two seasons.

Each starting pitcher worked into the fifth inning as faulty defense caused each team to each have a 3-run inning in the contest, the Falcons in the third frame and the Seahawks (7-12) in the fifth. After two scoreless innings, Severna Park broke the ice being supported by a throwing error to start the inning followed by Henson’s bunt hit. Sophomore shortstop Angel Santiago-Cruz grounded a fielder’s choice to score a run and No. 3 hitter Luke Herz doubled in a pair off Seahawk starter Aiden Cassily.

Lefthander Michael Broyles got only one out in the top of fifth, losing a 3-0 lead as South River tied it up. A dropped fly ball in the outfield resulted in a couple of runs scoring and another miscue tied the game at 3 as Sean Williams replace Broyles on the bump.

”With the errors and mistakes, we literally gave them runs and kept them in the game,“ said Milton. “We were actually lucky to come out on top.”

Milton’s crew regained the lead in the bottom of the fifth when Jimmy Miller walked with the sacks full and added what Severna Park thought would be an insurance run on a delayed steal of home on the old first and third play forcing a wrong throw to make it 5-3.

South River wouldn’t give up and in their final at-bat tied it up on a double-error on the same play.

Brooks Harris started the bottom of the seventh, lifting a pop-up along the first base line that three fielders could not handle. Just after it landed amongst the trio in fair territory, Harris slid into second with a two-bagger. Two walks loaded the bases with one out and up came Henson to deliver the game-over knock.

”I was thinking of trying to hit it deep somewhere to score the run from third,” said Henson III. “And God made it come through. It was a fast ball, a little outside and belt high. It was the first game winning hit of my career. ”