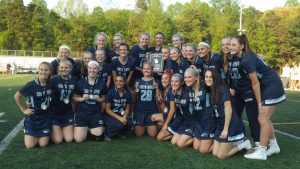 It was for the birds Monday in the Anne Arundel County lacrosse championship at Old Mill High. No. 10 Severna Park boys’ edged out Broadneck while the South River girls took down No. 13 Severna Park.

South River (13-2 overall) fell behind early gave up the game’s first two goals, but held the Falcons scoreless for nearly 16 minutes and took the lead for good. The Falcons grabbed an early 2-0 lead on goals from Rachel Spilker and Kayla Minton in the first nine minutes.

“The first time we played them, we just had a slow start and didn’t really pick it up,” Sullivan said. “Coming into this game, we knew we had to have the pedal to the medal the whole time and we just clicked really well today.”

Just a minute later, a Falcons’ shot went off a post and the Seahawks finally got on the board with 12:39 left in the first half on a goal from Bronwyn Patterson. Alexis Grant went high three minutes later to tie the game, then the Seahawks went ahead for good when Madeline Cloyd stayed patient and scored with 5:23 left to give South River a 3-2 lead.

Meanwhile, the South River defense kept Severna Park (10-5) off the board and added goals from Madeline Lenkart and Sullivan to go up 5-2. The Falcons finally broke the drought with a goal in the final minute of the half to cut the deficit to 5-3.

“Our defense was the MVPs tonight in this game,” South River coach Caroline Cochran said. “They were coming up with big turnovers and playing together as a unit, which is what we’ve been practicing the last few weeks and it finally came together.”

Lenkart forced three turnovers and had six ground balls to lead the defense. She forced a turnover in the opening minute of the second half that led directly to a goal that started a five-goal run. Olivia Skinner also drew a charge during the run and the Seahawks scored a minute later.

“Tonight we put a big emphasis on coming out ready to go,” Lenkart said. “There is a lot of a team effort that goes into it. To have a great defensive stand and have it turn into something on the offensive end is a great feeling.”

Grant had two goals and an assist, Cloyd had a pair of goals and Patterson, Lenkart, Kelsey Winters (two assists) and Lauren Zinkl (assist) each added goals. Carly Mansur stopped five shots for the Seahawks, who have a bye in the first round of the playoffs and will host the Annapolis-North Point winner on Friday.

“In the playoffs, it’s a brand new season,” Cochran said. “This definitely boosts our confidence.”

Maddy Brady scored two goals to lead the Falcons, who will face either Old Mill-Glen Burnie Friday in the Class 4A East Region Section I semifinals.

“This was a good game to try some new things. We tried some new stuff and saw what worked and what didn’t work,” Severna Park coach Kaitlyn Hines said. “We’re just really excited to get going in the playoffs.” 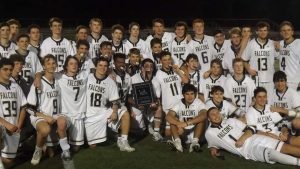 Severna Park is Anne Arundel County boys’ lacrosse champions, but it wasn’t easy. The No. 10 Falcons had a little more trouble finding the back the net for most of the first half before coming to life to claim a 9-7 decision.

“It was a real tough game. Hat’s off to Broadneck, which really brought it tonight. I thought they had a great game-plan against us,” Severna Park  coach Dave Earl said. “We struggled shooting in the first half, were off target a bunch of times and hit a few pipes. I just encouraged our guys to keep firing away and they would start falling.”

Sophomore attackman Michael Harmeyer scored two goals while senior midfielder Josh Coffman contributed a goal and an assist for Severna Park (12-2). Goalkeeper Shane Carr recorded 15 saves to anchor a solid defensive effort for the Falcons, who shut out the Bruins in the second quarter then held them to one goal in the fourth.

“I can’t say enough about Shane Carr. What an amazing game he had. Shane was absolutely lights out and really kept us in it,” Earl said. “Also, our young defense really stepped up. They’re growing up and showing some flashes of becoming a pretty good unit.”

Severna Park starts junior Matthew Alton and sophomores Ben Morgan and Trent Bellotte on defense. That group was solid in front of Carr, forcing Broadneck to take the type of shots the goalie wanted to see.

“It’s awesome and means a lot,” Cope said of being part of a third straight county championship team. “Broadneck is a tough opponent, our big rival and it always feels good to beat them.”

Broadneck executed its game-plan perfectly for the first quarter and a half – controlling possession and taking time off the clock.

Houser beat his defender from behind and fired a bounce shot past Carr to give the Bruins a 1-0 lead with 1:15 remaining in the first quarter.

It remained that way for most of the second quarter as both teams played solid defense. There were plenty of shots from both sides, but most were wide, high or hit the pipe.

Broadneck committed a slashing penalty with 4:22 to go in the second quarter and that ignited a three-goal flurry that gave Severna Park a 3-1 lead at halftime.

Hansen made a beautiful inside feed to Dean Draughn on the crease and the senior midfielder turned and fired a point-blank shot into the top corner to tie the score at the 3:45 mark. Moments later Thomas drove from behind to 10 yards beyond the goal before stopping and unleashing a hard shot that beat goalie Brandon Hall (8 saves), making it 2-1 with 2:03 remaining in the first half.

Broadneck was whistled for another slashing penalty on the ensuing faceoff and Severna Park capitalized again. This time, Thomas delivered the inside feed to Cope on the crease for another easy shot from the doorstep. After being shut out for 20 minutes and 15 seconds, the Falcons suddenly exploded for three tallies in the span of two minutes.

“We had two penalties right before halftime and that killed us because they cashed in. That little stretch was just so impactful,” White said. “We had control of the first half and those two penalties switched momentum around. Otherwise, our players executed the game-plan exactly the way we wanted.”

Severna Park scored twice in just 16 seconds early in the third quarter to increase its lead to four goals. Harmeyer dodged from goal-line extended and scored unassisted. The Falcons captured the faceoff and Cope took a couple steps inside the restraining lane then uncorked a cannon blast of a crank shot to make it 6-2 at the 10:26 mark.

Cope said the Falcons heeded the advice of their head coach and did not get frustrated by the first-half shooting struggles.

“We just kept shooting. Our offense was working, but our shots just weren’t falling,” said Cope, who is committed to the Naval Academy. “We just had to keep peppering the goal and eventually they would go in.”

Broadneck responded with a three-goal run to get right back in the game. Facciponti got things going by winning the faceoff, racing into the offensive zone and scoring off a nifty backhanded flip with 8:41 to go in the third.

Facciponti won the next couple draws to set up consecutive goals by Schwob that were both assisted by Zercoe as the Bruins cut the deficit to one (6-5) with 6:39 left.

However, Severna Park just would not allow Broadneck to get the equalizer with Cope scoring off another crank shot and Coffman dodging down the alley to convert from close range to push the advantage back to 8-5.

Houser found junior midfielder Parker Griffey open on the crease for a goal with just 5.2 seconds remaining in the period as Broadneck got back within two going into the final frame.

Harmeyer scored his second goal of the game off an assist from Coffman to give Severna Park a 9-6 lead with 8:03 to go in the game. The Falcons then succeeded in salting away most of the remaining time to close out the contest.

“We were really happy with our defensive performance. We did some different things and shut some guys off,” said Broadneck coach Clay White. “We just needed to score a few more goals. We got some quality looks at times and just could not finish.”