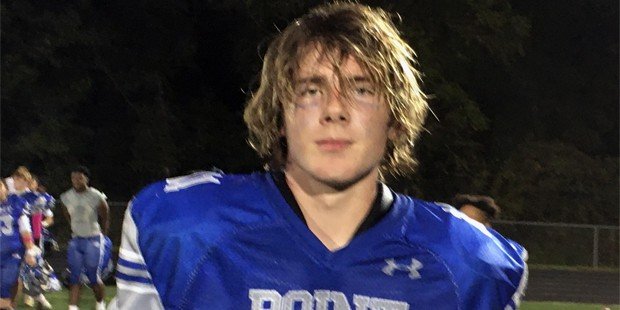 The Pointers were able to make the proverbial one more play in a 7-6 decision over Patapsco, for their fifth consecutive victory.

Momentum-killing fumbles and interceptions kept the score low — and the enthusiasm high from an overflow crowd at 1st Mariner Field at Sparrows Point.

Sparrows Point (5-1 overall, 5-0 Division III) avoided such mistakes on its third time with the ball, going 96 yards on 14 plays to jump ahead, 7-0, on a 20-yard pass from senior quarterback Colin Casey to senior wideout Gage Carr with 2:52 remaining in the first half.

Carr used his leaping ability, good hands and 6-foot-2, 190-pound frame to haul in what was essentially a jump ball in the corner of the end zone.

“He (Casey) threw it up there and I made a play,” Carr said after scoring his sixth TD pass of the season. “I just caught the ball — touchdown.”

Carr’s 28-yard grab was a pivotal play early in the sequence on a third-and 12 from the Pointers’ 2-yard line.

Senior Brody Donohue’s conversion kick turned out to be the difference in the game.

The Pointers were invading Patapsco territory again early in the third quarter when another fumble, recovered by Patapsco junior linebacker Eric Olsen, put any notion of another score on hold.

The Sparrows Point defense, though, stopped the Patriots cold with a three-and-out after a tackle-for-loss by senior linebacker Alex Lewis and a sack by junior defensive lineman Hunter Petrovia.

The Pointers’ offense kicked back into gear until a 79-yard interception return by junior defensive back Elijah Bass carried the ball to the enemy 6-yard line.

On the next play, sophomore running back Noah Cornish smashed his way into the end zone with 4:17 remaining in the third quarter.

When the point-after attempt was wide, Patapsco coach Tyler Clough said that he wasn’t worried.

“I thought we would score again,” Tyler Clough said about his team.

Besides, the way his defense, spearheaded by Olsen, Mcbryde, junior defensive end Kevin Batchelor and senior linebacker Gavin Tezzano, was forcing turnovers, he figured that the Patriots would have ample opportunities to strike back.

And he was correct about getting more turnovers, considering Olsen picked off Casey to stop Sparrows Point’s next advance.

Nevertheless, the Pointers’ defense continued to be a brick wall with a 7-yard sack by senior defensive lineman Chris Brown stopping the Patriots ensuing drive.

When Sparrows Point got the ball back, it was hunting another score after a 24-yard pass from Casey to junior wideout Adam Rode put the ball at the Patriots’ 31.

Sparrows Point coach Lamar King said that although his team’s running game was stalled by the Patriots, they found a way to win.

“We just had to go with what was working,” he said about a receiving corps of Rode (6 catches, 103 yards), Carr (4 for 57) and junior De’Andre Duvall that had a successful outing. “The kids are really working hard, and we’re getting better every week.”

The Pointers clinched at least a tie for the Baltimore County Division III title with the victory. Sparrows Point has Chesapeake-Baltimore County (next Friday at home) and at Lansdowne (Oct. 22) left in Division III play before closing the regular season at Overlea on Oct. 29.

Clough, whose team dropped its second straight after a 4-0 start, lamented some dropped passes from junior quarterback Shyheid Strickland, although he praised the Patriots’ effort.

Moreover, Patapsco (4-2, 3-2 Division III) had very little success on the ground as well.

“We’ve been able to pretty much run the ball at will this year,” he said. “But they were filling holes really well.”

Clough added that he has never been more proud of his team.

“Both teams played well,” he said. “It was just a good old-fashioned neighborhood game.”

Pictured above: Sparrows Point wideout Gage Carr caught four passes for 57 yards, including a 20-yard touchdown to help the Pointers to a 7-6 victory over neighborhood rive Patapsco, Friday night.