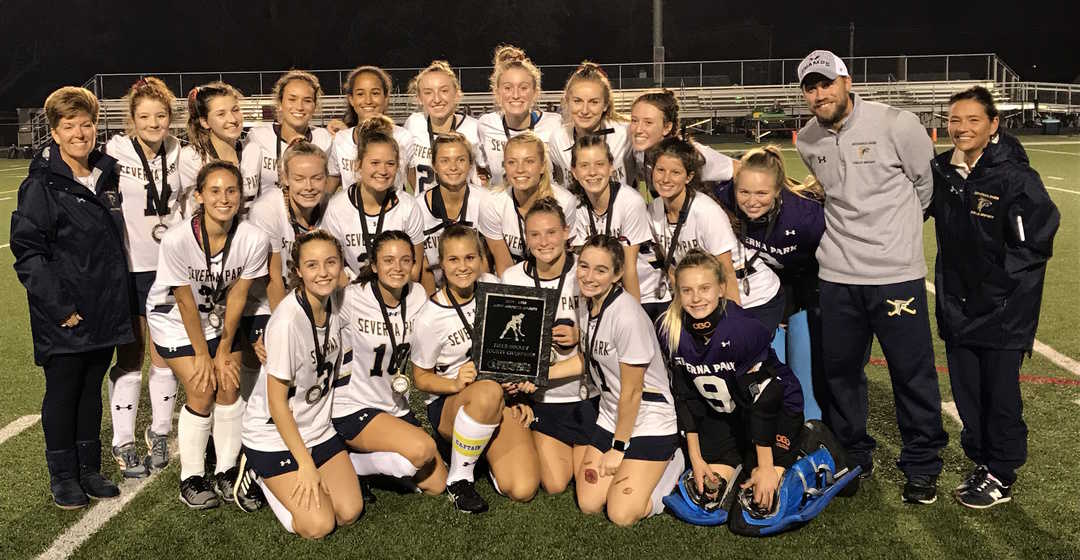 Falcons coach Shannon Garden said her players wanted the junior forward to take the stroke, so she complied.

Esposito fired the ball to the low left corner where Arundel goalie Savannah Brooks couldn’t get a handle on it and it dribbled over the goal line. The goal held up as the game winner, giving the No. 6 Falcons a 2-1 victory and their second county title in three years.

Garden said she was expecting overtime after Arundel’s Hailey Kohlman tied the game with 4:09 left and after that, the No. 3 Wildcats stopped the Falcons on three straight penalty corners. A foul on Brooks as the Falcons battled in the circle on the third corner led to Esposito’s penalty stroke.

“I just think the girls had confidence in her at that moment and that was a great decision,” Garden said.

Esposito said she was “pretty confident” as she stepped to the line even though Brooks had stopped a penalty stroke by her teammate Lila Slattery earlier in the half.

The Falcons are the only team to beat Arundel (11-2-2) this fall. In the first meeting, they used two second-half goals to win 2-0. Monday night, they scored just three minutes into the game.

Slattery moved the ball from the top of the circle, dodging several Wildcats as she moved around to the right side of the goal and fired into the cage for a 1-0 Severna Park lead with 26:57 left in the game.

“I got the ball off a free hit and I dribbled past a few players,” said the senior, “and I had the shot, so I just let it go, because we wanted to score early and have high energy from the start and I think that’s what we did.”

The Falcons at times seemed to have too much energy as they kept fouling, drawing 11 cards, many for body contact. Most were yellow cards, forcing the offending player to sit out for five minutes. Severna Park played at least one man down for most of the second half. At times, they were two or three players down.

Still, the Wildcats couldn’t break through until their seventh penalty corner although they had multiple opportunities to score, especially during two stretches while Severna Park played three men down.

“It was definitely a challenge,” Slattery said, “because we wouldn’t have our set men. We had to keep moving and it took a lot of communication with each other to step to ball and mark a team like that.”

Severna Park defenders Carsin Smith, Lauren Aguilar and Zoe Day played a terrific game and goalie Charlotte Kramer made all three of her saves in the second half.

But Kohlman finally tied the game on a penalty corner. After the ball ricocheted around the circle, Sara Pique passed it to the left side where Kohlman punched it inside the post.

Arundel coach Carrie Vosburg said all the cards made it difficult to be consistent with their play.

“I don’t think were able to move the ball into open space and take advantage of it,” Vosburg said. “I also do think because of the number of cards, that type of play, we were taken out of our game a little bit mentally, physically… I’m proud of them for coming back and never giving up. The fact that we scored with four minutes left says a lot about our team.”

Vosburg, whose team committed just one foul that drew a card, and Garden said they had never seen a game with 12 cards.

The Falcon’s fouling was particularly frustrating for Vogsbug, who would like to see the rules changed to add further consequence as the number of cards mounts, perhaps playing man down for the rest of the game after a certain number of cards as is the case in girls lacrosse.

Vosburg said she would address that with county authorities as soon as she can.

In the meantime, the Wildcats likely face a rematch with the Falcons in the Class 4A East regional playoffs next week.

Arundel is the top seed in Region I within the East and Severna Park is second. With just three teams in the region, Arundel has a bye through to the Oct. 30 final while Severna Park will meet Annapolis in Monday’s semifinals.