Poly’s Dasia Townes (23) is met by Western’s Gabrielle Johnson on a shot attempt during the second half of Thursday’s Baltimore City girls’ basketball contest. Townes finished with 19 points as the No. 4 Engineers held off the ninth-ranked Doves inside a packed Western gym on Falls Road.

Dasia Townes said that there isn’t just one person on the Poly High girls basketball team who takes charge when its needed.

“We have a team full of leaders,” the junior forward said after the fourth-ranked Engineers rallied past No. 9 Western, 69-61, in front of a standing-room only audience inside the Doves’ gym in Baltimore City.

In what was building toward a stunning upset after Western took a 49-48 lead early in the fourth quarter, on a clutch three-pointer by sophomore guard Vashae Rideout, was stopped in its tracks by Poly’s poise and maturity.

The Engineers, who ended Western’s two-year reign as city league Division I champs last season, did not allow a bad situation to get worse.

Instead, they leaned on their upperclassmen to blunt the Doves’ rally and pull away down the stretch, closing the game on a 21-12 run to improve their record to 5-1.

A pair of free throws by junior guard Cache Wilson put Poly back on top following Rideout’s three, and the young Doves (4-1) were never able to regain the lead.

Poly senior guard Janya Lilly then sandwiched a layup and three-pointer around a steal-and-and score by Western precocious freshman guard Nyceara Pryor, who led all scorers with 20 points after coming off the bench to give Western a much-needed spark.

Wilson then went coast-to-coast for another bucket before junior forward Karis Ferguson’s baseline drive netted two more points for the Engineers to give them a 59-51 advantage with just over four minutes left in regulation.

After a free throw by Western senior forward Destiny Hawkins sliced a point off the deficit, Poly answered with a fastbreak finish by Townes which upped the lead to 61-52 with time running out on the Doves’ bid to run their season-opening winning streak to four games.

“We kind of let everything get to us — the crowd, everything,” said Western coach Tasha Townsend, whose team trailed, 46-37, with just under three minutes remaining in the third quarter before mustering a big comeback to take the lead — briefly — in the final period. “We learned a lesson, a lesson the we have to play our game.”

The Doves’ 12-2 run bridging the late third and early fourth quarters was the product of two buckets by senior small forward Tykeara Burden, four straight free throws by Pryor and one by freshman guard Gabrielle Johnson to knot the score at 46-all.

Townes then converted twice from the charity stripe as well to put the Engineers back on top, 48-46, heading into the final frame.

Rideout’s three then gave the Doves momentum that Poly slowed to a snail’s pace in short order.

“We learned to be resilient,” Poly coach Kendall Peace-Able said about her team’s strong stand in the fourth quarter. “Last year we gave up a four-point play in our last game and lost by five. Last week we were down by 30 to St. John’s College and came back (to only lose by 18, 85-67). We showed a lack of composure (last year), but we’re getting better at it. If we hadn’t played like we did (in coming back) last week, tonight might have been different.”

Both coaches liked what they saw in Pryor.

“She’s phenomenal,” Townsend said. “Very scrappy. She gave us a big boost with her energy.”

Peace-Able said that Western’s “newbies,” including Pryor, Johnson and Korteni McMurray, looked good to her.

“I’ve been watching (Pryor) play for a long time, and I’m looking forward to seeing her more,” the Poly coach said. “She’s doing a great job and has a very high ceiling.” 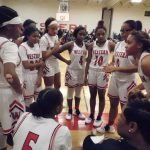 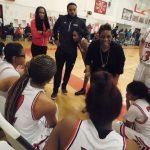 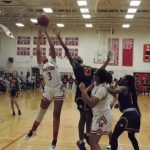