No. 13 Elks pound 2A state champ Oakdale in playoff rematch 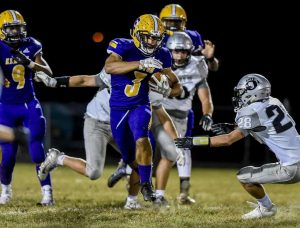 Elkton running back Tayshawn Watters breaks through for several yards during Friday’s non-league football contest against Oakdale. Watters made his mark on defense with three sacks as No. 13 Elks routed the defending Class 2A state champs from Frederick, 31-14, in Cecil County.

Elkton High’s football team long had Friday’s match with Frederick County’s Oakdale circled on the calendar. The Elks’ 2018 campaign ended at Oakdale with a sobering loss in the Class 2A state semifinals.

On a day it said a final goodbye to a member of its family, Elkton put together an inspired and dominating performance under the lights in Cecil County. The 13th-ranked Elks defeated Oakdale, 31-14, in a non-league contest.

Elkton (5-0 overall) ran off 24 unanswered points, handing the reigning 2A state champs, ranked 18th in the state media poll, a second straight loss after 17 consecutive victories. Oakdale (3-2) defeated the Elks, 38-0, last season in the 2A semifinals, before defeating Glenelg for its first state title.

The Elks announced themselves as a serious contender for the 2019 crown in the rematch, hours after the funeral of Elkton assistant coach Ed Brown. Brown, whose son Ian, is a sophomore running back/linebacker for the Elks, died suddenly last week.

From there, it was all Elkton. Trevin Ewing returned a punt 95 yards for a touchdown, and Jacob Bosler’s 31-yard field goal put the Elks up, 17-7, at halftime.

Late in the third quarter, Nolan Null threw a 16-yard touchdown pass to Mike Vass, extending the lead to 24-7. It was 31-7 in the fourth after Jakeem Jackson returned an interception 65 yards for a touchdown.

The Elks have won 10 straight regular season decisions, dating back to last season. Elkton plays at North East in a UCBAC non-divisional match next weekend.