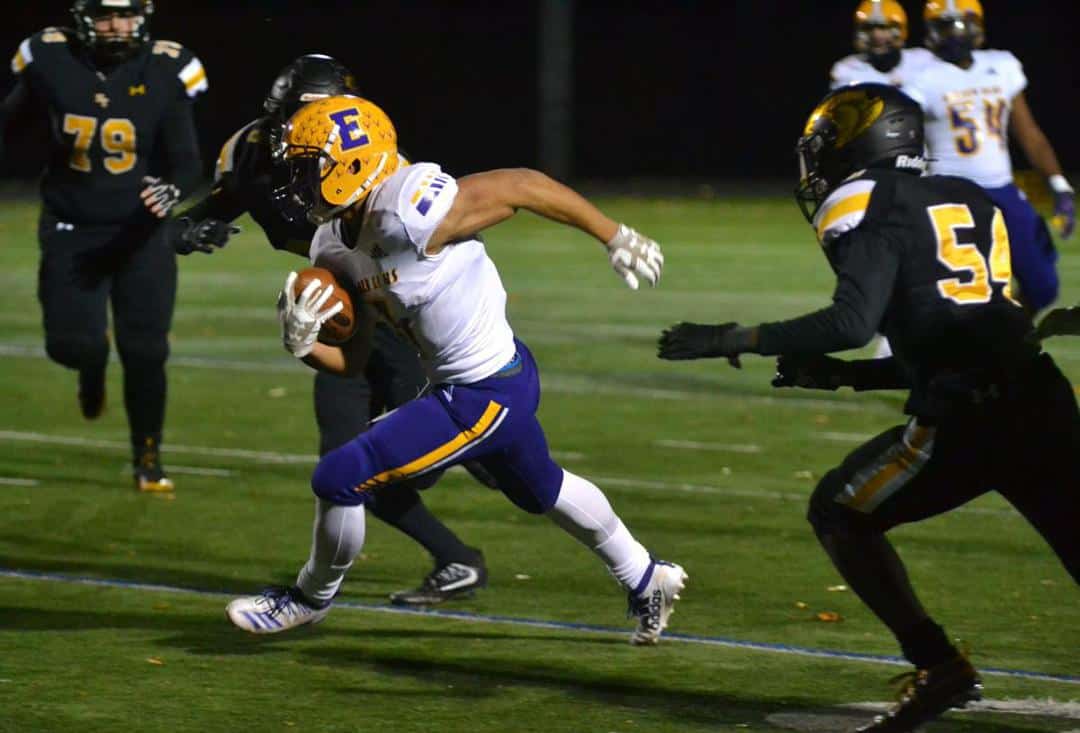 Elkton’s Tayshawn Watters breaks off some of his 209 yards Friday evening against Harford Tech. The No. 12 Elks clinched the UCBAC Chesapeake title with a 52-6 victory over the 17th-ranked Cobras in a matchup of unbeaten squads in Bel Air.

The No. 12 Elks brought the heat, and then some, routing 17th-ranked Harford Tech, 52-6, in the psuedo UCBAC Chesapeake title game in Bel Air. Senior running back Tayshawn Watters rushed for 209 yards and 3 touchdowns for Elkton (9-0 overall), and each scored twice.

The Cecil County school turned the battle of undefeated teams into a mismatch, putting up a running clock in the third quarter. In addition to clinching first in the UCBAC Chesapeake (6-0), the Elks move into position to secure the No. 1 overall seed for next week’s Class 2A state playoffs.

After losing in the state semifinals last season, Elkton is arguably the favorite to hoist the 2A championship trophy at Navy early next month.

“We have a lot of sophomores starting last year and now they’re more mature,” said Watters. “They know how to carry the job, they’re bigger, stronger, faster. We really wanted this. Oakdale left a bad taste in our mouths.”

Oakdale from Frederick County ended the Elks’ 2018 campaign with a 38-0 whitewashing in the 2A state semifinals. Elkton got payback with a 31-14 home victory in week 5.

“It was a big setback. Everybody was hungry and got the win,” said Elks senior slot receiver/defensive back and Villanova University commit John Rhodan. “We’re not worrying about them now, just the next team.”

The Elks have chewed and spit out the opposition since, winning their last four decisions by a total 199-39 margin. Friday, Elkton capped its perfect regular season since 2000 when it won its first state title.

Watters scored on runs of 39, 26 and 77 yards, and Michael Vass caught 4 passes for 105 yards and two touchdowns. Junior Trevin Ewing broke off scoring runs of 17 and 57 yards.

“They’re not the biggest or strongest, but they’re coachable and execute,” said Feeney. “They outwork the opposition and take pride in their job.”

Junior quarterback Norman Null threw for 192 yards off 8 completions. Watters and Rhodan each had an interception, and Ronan DePaul had 2 sacks.

The Elks took the game’s opening possession 58 yards in 8 plays as Ewing scored on a 17-yard scamper. Late in the quarter, Ewing took Null’s handoff, got outside and sprinted down the sidelines into the end zone for a 57-yard score.

Down 17-0, Harford Tech (8-1, 5-1 UCBAC) gave its home faithful some excitement as Kelvin Mendez took Ryan Hunt’s screen pass and went 75 yards for a touchdown, bringing the Cobras to within 17-6. Harford Tech’s defense forced a 3-and-out, but its offense also produced a 3-and-out.

Elkton went into hyper-mode. Null followed a 42-yard pass to Rhodan with a 24-yard toss to Vass in the end zone, capping a 4-play, 52-yard drive. Two plays after Rhodan’s interception, Watters weaved his way untouched to end zone, putting Elkton up, 31-6, at halftime.

“After we got over that hump [Oakdale], our confidence skyrocketed,” said Watters. “We come in ready to work and we know we’re better than those teams.”

Watters opened the second half scoring with a 26-yard sprint to the end zone. He went through the middle on his next touch and went untouched for his final score of the evening and starting the running clock with 5 minutes left in the 3rd quarter.

“We were simply out-coached. We didn’t put our kids in the best position to win this football game,” said Cobras coach Tim Palmer, whose team lost to Elkton in last year’s 2A East semifinals. “Give Elkton credit, they a good thing going on this year. They came in and played their brand of football. It was a wake-up call.

I firmly believe in these boys. The resolve we’ve shown all year will come back. Sometimes it’s not your tonight. I believe these guys can accomplish everything we’ve set out to accomplish.”

The Cobras, who reached the 2A state semifinals in 2017, will host a 2A East Region first round next weekend. The top eight teams in each region of the state four classifications (4A, 3A, 2A and 1A) will qualify for postseason play (formerly was top four in each region).

“Our coach always tell us don’t to get too high in mountain or too low in the valley, just stay even keeled,” said Watters. “We’re not going to let no win get to our heads.”