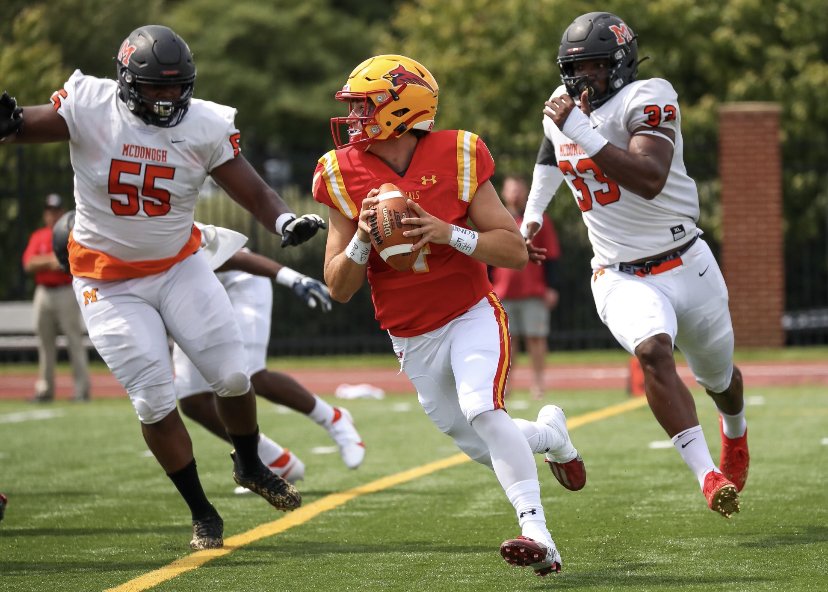 Calvert Hall quarterback Noah Brannock looks downfield as McDonogh defensive linemen Kwan Williams (55) and Dani Dennis-Sutton give chase during Saturday’s MIAA A Conference football contest. The junior signal caller had a breakout performance, throwing for two scores and rushing for another in the Cardinals’ big win over No. 3 McDonogh at Russo Stadium in Towson. (photo – SportsMajors)

by Nelson Coffin
When the Calvert Hall College football team emerged from the locker room, for their MIAA A Conference football opener with McDonogh School, waiving American flags on the 20th anniversary of 9/11, the electricity in the air at Paul Angelo Russo Stadium was palpable.
Then the sixth-ranked Cardinals sent a jolt through the No. 3 Eagles by scoring two first-half touchdowns and finishing off a 24-7 triumph in front of a raucous crowd in Towson.
Wideout Donnie Lewis’ circus catch of a 24-yard pass from junior classmate Noah Brannock delivered the first charge for Calvert Hall (2-0 overall, 1-0 MIAA A) with 1 minute, 3 seconds remaining in the first period.
The five-play, 47-yard drive was highlighted by a 12-yard connection from Brannock to Lewis and a 10-yard Brannock scramble. Senior Andrew Petrino’s conversion kick give the Cards a 7-0 advantage.
They zapped McDonogh (0-2, 0-1 MIAA A) again in the second period after senior defensive back Tim Downs picked off McDonogh senior Kaden Martin to set up a seven-play, 53-yard sequence capped off by Brannock’s 5-yard bolt for a 14-0 advantage with 9:21 left in the half.
A 15-yard strike from Brannock to senior Rahkeem Smith and a personal foul against the Eagles sustained the drive before the TD jaunt completed the drive.
Meanwhile, Calvert Hall’s rugged defensive line, spearheaded by seniors Daniel Owens and Luke Baker, juniors Corey Broome and Josh Thomas and freshman Emile Dore, were in the midst of holding McDonogh superb senior running back Stefan Egbe to 12 carries for just 55 yards.
Those linemen, along with senior linebackers Matt Conroy and Dylan Aguilera, exerted enough pressure on Martin to make him finish the day with eight completions for 99 yards and one TD — a 4-yard aerial to senior running back Malachi Jones with 8:30 left in the third quarter to cut the deficit to 14-7.
The Eagles appeared to be gaining some momentum with the drive that was buttressed by passes from Martin to lanky senior playmaker Preston Howard for 12 and 42 yards to carry the Eagles deep into Cardinal territory.
The comeback came apart, however, on the next Calvert Hall possession when penalties, one for a horse-collar and another for grabbing a face-mask, were sandwiched around a 13-yard Brannock-to-Smith strike.
Two plays later, Brannock found Smith for a 15-yard gain to the McDonogh 15-yard line.
The same duo hooked up for the Cardinals’ final score on a well-executed 15-yard slant with just over five minutes remaining in the third quarter for a 21-7 lead.
Calvert Hall then blunted McDonogh’s next drive, helped by junior defensive back Antwan Morante’s sack, before putting together its longest drive of the game.
The 13-play, 62-yard progression featured two Brannock-to-Lewis passes for first downs and a Brannock keeper that also moved the chains.
Sophomore linebacker Noah Onkst’s jarring tackles helped to halt the advance at the McDonogh 21-yard line before Petrino split the uprights from 38 yards to practically put the game out of reach at 24-7 with 9:05 left in regulation.
Although junior safety Peyton Strzegowski recovered an Eagle fumble deep in McDonogh territory, the Cardinals elected to implement the victory formation as the final seconds ticked off the clock and the student section rushed the field to celebrate.
McDonogh coach Hakeem Sule said that he didn’t believe that the Eagles were bereft of energy after leading Washington Catholic Athletic League power Gonzaga College until the final seconds of the third quarter last week.
“That had nothing to do with it,” he said. “Calvert Hall came out and competed. They went after our secondary. They came after us. It’s been awhile since we’ve had a win — and that’s on me. We just have to go back to the drawing board.”
The Cardinals appeared to win the battle of the trenches, which was a bit surprising after losing senior starting left guard Michael Nwosu to COVID-19 protocols before the game and junior backup Michael McQuaid to an injury during the battle.
Freshman LaQuan Upshur finished the game at the position and more than held his own, Calvert Hall coach Josh Ward said.
Brannock said that the 9/11 atmosphere was a power source for the Cardinals.
“When I came out and saw the students and the crowd, I said ‘Wow,’” Brannock said. “We rolled with the wave.”
Speaking of rolling, Brannock was equally effective from the pocket and on rollouts in the contest.
“I worked hard all winter,” he added. “I knew I had to be prepared to roll out and keep moving.”
Lewis said that his TD grab happened because Brannock trusted him to make the catch.
“I just went up and grabbed it,” he said.
Brannock said that he often looks for Lewis — and vice versa.
“Donnie’s my go-to guy,” he said. “We train a lot together. I’ll call him up on a Saturday morning and we’ll go throw the ball around.”
Ward was especially proud of the line play exhibited by the Cardinals.
“We knew we had to be physical,” he said. “Our guys just flew to the ball. That is a heck of a team we played today, but our guys did what they wanted to do.”
Brannock remembered his baptism of fire when he entered the game to take over signal-calling chores as a freshman in 2019 at McDonogh when the Eagles prevailed.
“I got my butt kicked,” he said ruefully.
The players said that a pre-game speech earlier in the week from Army veteran and CHC defensive backs coach Eli Troxell had them thinking of 9/11, even though they weren’t around to experience the grief off that tragic day.
“Eli told us to be grateful for what we have,” he said. “It can be taken away from you quickly — every day is a gift.”