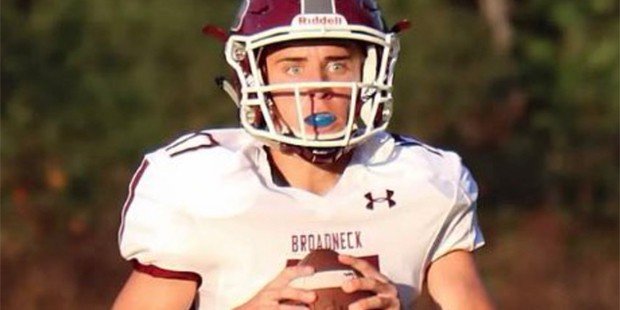 It was not the best passing performance in Josh Ehrlich’s three year career as Broadneck’s starting quarterback, but when it mattered most, Thursday night, Ehrlich delivered as the Bruins rallied in the fourth quarter to claim a 21-15 victory over Old Mill in the second week of the Anne Arundel County spring football season.

Ehrlich, who scored Broadneck’s first touchdown on a 1-yard sneak in the second quarter, scampered eight yards for a score midway through the fourth quarter, pulling the Bruins within two at 13-15. Later in the quarter he went to the air and found Eli Harris for a 16-yard touchdown pass and then pushed the Bruin lead to 21-15 with a two-point conversion toss to Kyle Pierce.

Ehrlich completed just 12-of-35 throws in the contest for 140 yards and gain 38 yards rushing. Broadneck relied heavily on the production of running back Rashid Proctor who gained 126 yards on 10 carries. Harris caught five balls for 84 yards.

Old Mill jumped in front in the first quarter with a 75-yard kickoff return by Ryan Della in the opening quarter and the Patriots added a safety later in the quarter.