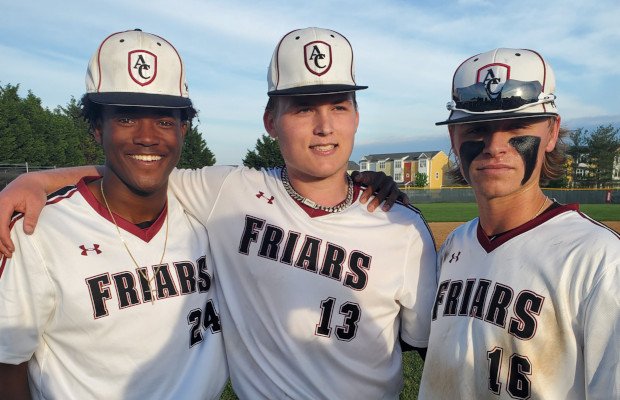 The Friars defeat No. 2 Calvert Hall for the second time this season

With an opportunity to clinch the second-seed for the upcoming MIAA A Conference double-elimination baseball playoffs, No. 2 Calvert Hall traveled to East Baltimore on Thursday to tangle with No. 9 Archbishop Curley.

The Cardinals, however, left without the prize they sought, as Curley pulled out a 3-2 victory, to complete a season sweep of the Cards and keep alive the Friars hopes of leap-frogging Calvert Hall and grabbing the second seed, and the first round bye that comes with it, for themselves.

It will all come down to the final regular season game for each team, next Tuesday, as Calvert Hall (19-7 overall, 9-4 league) hosts John Carroll and Curley (16-11, 8-5) visits St. Mary’s. Calvert Hall can clinch second with a win or a Curley loss. A Curley win and a Calvert Hall loss, would elevate the Friars by virtue of the tiebreaker earned by their sweep.

Curley slugger John Petryszak gave Gladden a 1-0 lead in the bottom of the fourth with a solo home run to right center. Gladden carried that lead into the fifth. He got his 10th strikeout before the Hall got three consecutive singles from Connor Keys, Lamar King and Chase Davalli to load the bases. Gaeta then called on ace Ryan Edmonds, who got the Cardinals’ hot hitting EJ Hankerson on a double-play grounder to end the threat.

The Cardinals got an unearned run in the top of the sixth to tie the game at 1-1. John Harris opened the inning with a single, and he moved to second on a throwing error. Quinn Gillas ran for Harris and he advanced to third on a fielders choice, and then scored on another infield miscue.

Edmonds then came up big at the plate for Curley in the sixth. After one out singles from Harry Middlebrooks and Zach Gaeta, the George Mason commit lashed a double to left, scoring Middlebrooks to give Curley a 2-1 lead. Hall Coach Lou Eckerl summoned Dom Bahr to the mound, to come on in relief of Steven Mufareh, and he motioned to the plate ump to intentionally walk Petryszak.

Curley’s Kevin Goedeke then coaxed a walk that allowed Virgil Watson, who came on to run for Gaeta, to score to give the Friars an insurance run and a 3-1 lead.

The Hall tallied in the top of the seventh to cut the Curley lead to 3-2.

Lamar King doubled to start the inning, moved to third on a fielders choice and scored on an infield groundout. King, who has been on an offensive tear all season, was 4-for-4 with two singles and two doubles, but Curley must have felt fortunate that he was unable to add to his area best home run total of 12. Following that run, Edmonds got the third out on a grounder to short to end the game.

“We got good pitching from both James and Ryan,” said Gaeta. “Calvert Hall is very tough, but we did what we needed to do today to win. James Gladden was very efficient, and Ryan Edmonds got that huge double-play ball.

Eckerl said he got a great effort from Mufareh on the mound.

“He pitched well enough to win but we left too many guys on base and we couldn’t get timely hits. Hats off to their two pitchers today because they kept us from getting those hits.”

Mufareh went 5.1 innings, while fanning 7, and holding the Friars to five hits.

“Steven had my number the whole game, and I had to go up to the plate thinking fastball against him [in the sixth], because I couldn’t hit his slider today,” said Edmonds. “I hit a first pitch fast ball and got it over the third baseman’s head. Calvert Hall is our rival, but we’ve been able to beat them 3-2 twice this year. This was a big win.”

“Lamar is a great player. Trying to get him out is always a huge accomplishment.”

The Cardinals were coming off a big 13-2 win over Mount Saint Joe on Tuesday, when they whacked five home runs, including two by Hankerson and one by King.

Pictured above: (From left) Curley starter James Gladden struck out nine in the first three innings and held Calvert Hall scoreless into the fifth, Ryan Edmonds had the game-winning RBI and came on in relief to pitch the Friars out of a one out bases load jam in the fifth, and John Petryszak, who had a walk and single before hitting a solo home run in the fourth to break a scoreless tie.