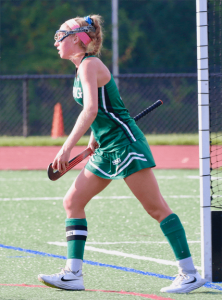 Leighton Eber scored both goals as the Gators improved to 2-0 in the IAAM B Conference with a 2-0 win over Maryvale Prep.

Eber’s first score was unassisted and came at the 16:32 mark of the opening half. She took the ball from just outside the circle, dribbled in from the right side, dodged a defender and put a hard shot in the right corner. She then doubled the SPSG lead, with 2:34 left in the first half, when she struck a ball which had rebounded out in front of the goal, into the left corner from, about 15 feet out.