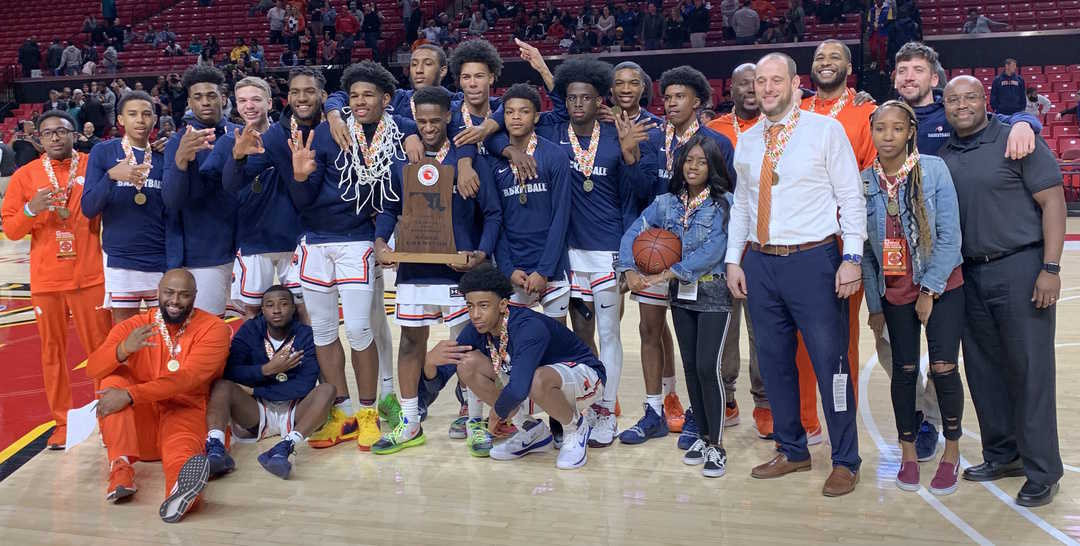 Poly, with assistant coach Anthony Fitzgerald (left), Brandon Murray, Rahim Ali, Justin Lewis, Armani Walker and coach Sam Brand are champions again after defeating Reservoir in the Class 3A state boys basketball title game at the University of Maryland Saturday. The No. 2 Engineers are the first team to win three consecutive 3A championships.

Poly High boys basketball coach Sam Brand said he felt “chills” Friday when a reporter asked about his team being in position to win a record third consecutive Class 3A state championship.

Saturday, Brand fought back tears. The No. 2 Engineers made history with a 69-41 rout of 15th-ranked Reservoir in the 3A title match at the University of Maryland’s Xfinity Center.

The Engineers scored 17 of the game’s first 19 points en route to the third-biggest margin of victory in 3A finals history. The Baltimore City school is the first program to win three consecutive 3A titles and the third area team (Dunbar twice and Randallstown) to three-peat.

“I feel real appreciative of your program and the guys to the right and all the people involved,” said Brand. “I’m very proud we’re here to do this.”

The intense and emotional Brand’s eyes welled up as past players were mentioned during the postgame press conference. Poly, once a football powerhouse, and among top academic schools in the area, has morphed into arguably Baltimore City’s premier program.

Amani Walker has been an unsung hero for Poly the last three years as a defensive cleaner in the paint. The 6-foot-8 center posted 12 points and eight rebounds in his final game Saturday.

“We have some very skilled players so I just wanted to have a presence or be a leader on defense,” said Walker, who transferred to Poly from McDonogh School after his freshman year. “I just do what some players really like to do – stick their head in the paint, getting rebounds, taking charges…just doing the tough things so we can get the W at the end.”

“He challenges me every day and doesn’t back down,” said teammate Justin Lewis, one of the nation’s top forwards in the Class of 2020, who finished with eight points, 10 rebounds and six assists Saturday.

The Cold Spring Lane school felt comfortable saying it was the favorite in this year’s 3A Final Four. After falling behind 4-0 to C. Milton Wright in Thursday’s semifinals, the Engineers didn’t trail for about the final 60 minutes of play on Gary Williams Court.

It was 8-0 after four minutes of play and 14-2 after one period following Murray’s reverse layup. Poly led 32-7 after Reservoir’s second field goal with 3 minutes, 47 seconds remaining in the first half.

The Gators, in their first state final, showed some life in the final minutes, closing the margin to 39-20 at halftime. Walker started the second half with a dunk and Poly again opened the floodgates on the Howard County school, building a 32-point advantage.

There would be no Cinderella-like ending for Reservoir.

“That’s just a phenomenal high school basketball team. That’s a phenomenal team in general,” said Gators coach Mike Coughlan. “We knew we had our work cut out for us.

“We were getting in the lane, but you can’t finish against that size. I knew we would have to hit shots to even a chance and we weren’t.”

“I’m going to think about all the good times that we had throughout the year,” said Coughlan. “I’ll never forget this group.”

With Walker only graduating from the starting five, Poly may be destined for another state Final Four next season. The Engineers have three state titles and two Baltimore City championships over the last four seasons. 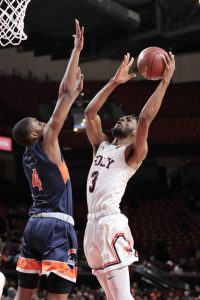 When a reporter asked Brand about next season’s non-league schedule, his thoughts were pretty “conservative.”

“If it’s up to me, I want to know who’s the Top 10 teams in nation are and I want all 10 of them,” Brand said. “I know that these guys are super high level ball players, super high level leaders, they’ve been through a lot of a big battles together and are ready for more in the future.”