Jeff Young has seen his share of success during his many years as part of the Chesapeake-Anne Arundel baseball program. The Cougars have won plenty of games and been a regular postseason contender.

They have also endured plenty of heartbreak.

So when Brendan Phillips struck out Towson’s Justin Mealey for the final out in fifth-ranked Chesapeake’s 5-1 win over No. 3 Towson in the 3A championship game – the Cougars’ first state crown since 2014 – at Regency Furniture Stadium Saturday night in Waldorf, Young’s thoughts stretched beyond the players and coaches in his dugout.

“It means a lot,” Young said. “Our former coaches, Coach [Jim] Simms, who I played for, was here. Coach [Ken] King, who I coached with, was here. I was here in 2014 when we won and my son was here in 2016 and 2017 when we lost. I’ve been through that and hopefully in a couple days this will ease a little pain. He was here with me. It’s a lot better to win these things than it is to not.”

The state title was the third overall for the Lake Shore program (20-3-1 overall), which has tasted defeat in the state finals on five occasions.

Early on in Saturday’s game, it appeared as though the Cougars might be headed for a sixth runner-up finish. Towson grabbed a 1-0 lead after Tariq Talley doubled with two outs and later stole third and scored on an error on the play.

Meanwhile, Towson starter Chase Supensky cruised on the mound in the early going, setting the Cougars’ first six batters down in order. But the bottom of Chesapeake’s lineup broke through in the top of the third, starting with Kyle Hickson’s double to left. Noah Bowerman then walked, and when the Generals were unable to record an out on Colin McDonald’s subsequent sacrifice bunt, Chesapeake was in business with the bases full and nobody out.

After an error and sacrifice flies from Owen Schmidt and Phillips over the next three at-bats, Chesapeake led 3-1, which proved more than enough cushion for starting pitcher Nick Karls.

Following the first inning, in which Karls retired the first two batters before eventually giving up a run, the Chesapeake hurler only allowed on runner past first base, He pitched 6 2/3 inning, surrendering one run on four hits while punching out seven.

“I didn’t really have my stuff in the beginning,” Karls said. “I was throwing a lot of balls…I settled in and started finding my stuff. I just started doing my thing, and with the bats behind me there was no stopping us.”

The slow start did nothing to worry Karls.

“Pretty much this whole playoffs we’ve been down in the first and second inning,” he said. “We come back and fight and scratch and claw. We never give up until the end.” 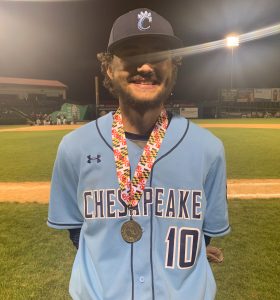 Nick Karls was impressive in his final game for Chesapeake-Anne Arundel Saturday. The senior headed to Morehead State University allowed just four hits over 6 2/3 innings as the fifth-ranked Cougars won their first state title since 2014 with a 3-1 decision over No. 3 Towson in the 3A finale at Regency Furniture Stadium in Waldorf.

For Towson coach Shawn Tormey, the championship was a tough finish for a senior class that he thought deserved a slightly better sendoff.

It was the Baltimore County school’s first state championship appearance since winning the 2A prize in 2000.

“I’ll remember each of them as individuals and how hard they worked to get to this point,” said Tormey. “One of the things that will stick with me tonight is in a 5-1 ballgame Nate Droski, who is a senior who bats ninth in the order, grinded that last at-bat and hits a single [with two outs in the seventh inning]. He could have mailed it in.

“That effort, that determination, that commitment to keep working despite all the odds against us was amazing. That’s a small, little anecdote that I’ll remember about Nate. I have anecdotes about every one of our seniors. I love them. They’re great kids.”

On the other side of the stadium’s field, Karls was just happy to be able to make some history for his school and earn another banner for the school’s baseball program.

“We’re really in the shadow of a lot of teams in Anne Arundel County,” he said. “You have Arundel, Broadneck and Severna Park. I’m happy to bring it back to Pasadena and do it for the community we had behind us. They supported us here today.”