Early turnovers give No. 4 Calvert Hall the edge at St. Mary’s 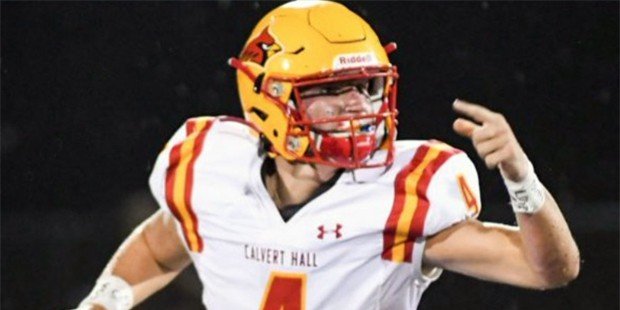 Calvert Hall traveled to Anne Arundel County for a second consecutive week and, unlike the lopsided loss it suffered at No. 2 Archbishop Spalding last Friday, the 4th-ranked Cardinals rebounded nicely, Friday night, capturing a 49-28 MIAA non-league win over No. 15 St. Mary’s, at the Saints’ Pascal Field in Annapolis.

The Cardinals defense set the tone, collecting three early turnovers, which kept the Saints fighting up hill all night.

Calvert Hall (5-1) took a 14-0 lead after one quarter as quarterback Noah Brannock tossed a touchdown passes to Rahkeem Smith and Gabe Levrone.

St. Mary’s (4-2) got on the board early in the second quarter when quarterback Rocco Abdinoor lofted a 33-yard TD toss to Israel Crockett, but a failed on-sides kick set Calvert Hall up with great field position and Brannock moved the Cardinals down the short field before throwing his third touchdown pass of the night, a 38-yarder to Donnie Lewis.

On the ensuing possession, Calvert Hall’s Matt Conroy came up with an interception and returned the ball to the St. Mary’s nine. That led to a short touchdown run by Daniel Harper, Jr. and the Cardinals took a 28-7 lead to the half.

Harper added another touchdown run, early in the third quarter, as the teams started to trade scores. Wyatt Cotton followed with a short touchdown run for the Saints, setup by a long pass from Abdinoor to Casey Smith, but Calvert Hall came right back with a TD by Dawon Dorsey to lead, 42-14.

Cotton added two more fourth quarter touchdown runs for St. Mary’s, but it proved to be too little, too late.

Pictured above: Calvert Hall quarterback Noah Brannock, who threw three first half touchdowns to help the Cardinals build a big early lead in the their 49-28 win over St. Mary’s.