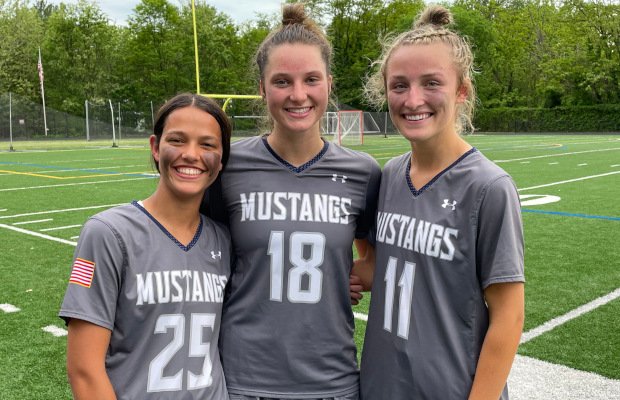 Mustangs survive and advance in the 3A girls lacrosse state tournament

The first five minutes made all the difference for No. 15 Marriotts Ridge in Wednesday’s Class 3A girls lacrosse state quarterfinal at Towson.

Goalie Grace Hejeebu and her defensive teammates held off a barrage of shots and the Mustangs’ fed off of that opening stand to drive the defending champion Mustangs’ 8-5 victory.

Hejeebu made three early saves and finished with 11. She and defenders Hope Hettinger, Camryn Fisher, Emi Moran and Amanda Windsor held the No. 20 Generals to five goals on 18 shots. 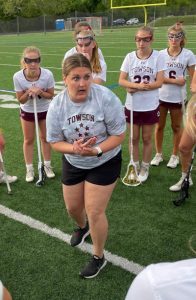 Towson coach Taylor Carhart sees a bright future for her program as they lose just three seniors from the team that pushed defending Class 3A state champion Marriotts Ridge before falling 8-5 in the state quarterfinals. In her first season, Carhart led the Generals to a 12-4 season with four of those losses coming by three or fewer goals and only three players will graduate.

The senior goalie said she enjoys playing for something bigger than herself and “especially having a team that I know is counting on me and relying on me to make big plays… A lot of respect to [Towson’s] shooters for being able to rip off hard shots like that, but I just give a lot of credit to our defense for making the shots tougher to allow me to see the ball better.”

After Hejeebu’s third save, the Mustangs set off on attack and Maisy Clevenger grabbed a loose ball, raced to goal and scored the first of her five goals with 19:23 left.

The Generals would tie the game at 1, but the Mustangs never trailed, building their lead to four early in the second half.

Marriotts Ridge (12-3) will play Northern, from Calvert County, in the state semifinals Friday night or Saturday at Paint Branch High School in Burtonsville. The state finals are next week at Loyola University’s Ridley Athletic Complex.

“Being a part of the team last year and getting all the way there and just knowing the feeling of what it’s like being at that game and playing at that level and on the field, I think it’s just pushing everyone to want to do it together,” said Clevenger, a junior midfielder.

With close wins over Howard (10-9), Westminster (12-10) and Towson, Hejeebu said the competition has just made the Mustangs stronger.

After Clevenger gave the Mustangs’ the 1-0 lead, the Generals (12-4) tied it when Lilywynn Holman connected with Kara Janishefski, who made a terrific cut through the middle.

Sofie Bender got the lead back for Marriotts Ridge, rolling the crease and slinging a low shot past Towson goalie Meghan Cottell with 15:59 to go in the half. Three minutes later Hayley Lettinga drove through the middle for a 3-1 Mustangs’ lead.

The teams traded goals to a 5-3 halftime, but the Mustangs came out of the break with the same kind of barrage the Generals opened the game with. Cottell had two of her five saves and Towson held off the first four shots.

Then Clevenger took a pass from Bender on the left side of the crease, faked a shot and slipped the ball past Cottell. About three minutes later, Clevenger rolled the crease and slipped a low shot in the near corner to boost the Mustangs’ lead to 7-3 with 14:21 left.

The Generals rallied on goals from Bridgid Vaikness and Avery Briggs to cut the lead to 7-5 with 8:28 left. After another Cottell save, the Generals took three straight shots but Hejeebu stopped two and the third sailed high. Marriotts Ridge recovered the ball and Clevenger added another goal off a crease roll to finish off the scoring with 3:17 to go.

Although they were a little slow getting into rhythm against Towson, Marriotts Ridge coach Amanda Brady said she’s happy with how her team is playing as they head into the state semifinals.

“At this point I think the girls are so disciplined,” she said. “They’re doing a great job listening to us as coaches and working together as a team. They know what works well and they also can read a defense and they can read an offense and I think that’s really what we want to say as coaches, that the girls on the field can see what’s happening and make adjustments as well as stay disciplined, stay true to the game plan.”

The Generals, who won their only state title in 1997, did just about everything they wanted to except shoot the ball accurately.

“If we would have executed our shots, I think the game would have rolled our way,” said first-year coach Taylor Carhart. “Other than that, we executed every single part of our game plan perfectly.

“Credit their No. 11 (Clevenger), a very good player, so quick, but I think Izzy (Sabatino) did a fantastic job on her. Of course, I told her, she’s going to score, but she limited her ability to do so and our defense played amazing, our attack got tons of caused turnovers on the ride, which is everything we asked for. We just needed to finish our shots.”

With just three seniors — Janishefski, Sabatino and defender Lydia Leshevich — the Generals could easily make another run at the title next year.

“Kara, izzy and Lydia are going to be really challenging to replace,” said Carhart. “All three are incredible players and I’m thankful for everything they did for this program, but my junior class is so strong … so I’m excited. I’ve got really sophomores and freshmen. The future’s bright.”

Pictured above: Marriotts Ridge goalie Grace Hejeebu (25) made 11 saves, midfielder Maisy Clevenger (11) scored five goals and defender Hope Hettinger (18) led the field defense as the No. 15 Mustangs defeated No. 20 Towson, 8-5, in the Class 3A state quarterfinals. The defending champion Mustangs will play in this weekend’s semifinals as they aim for the fifth title in program history.