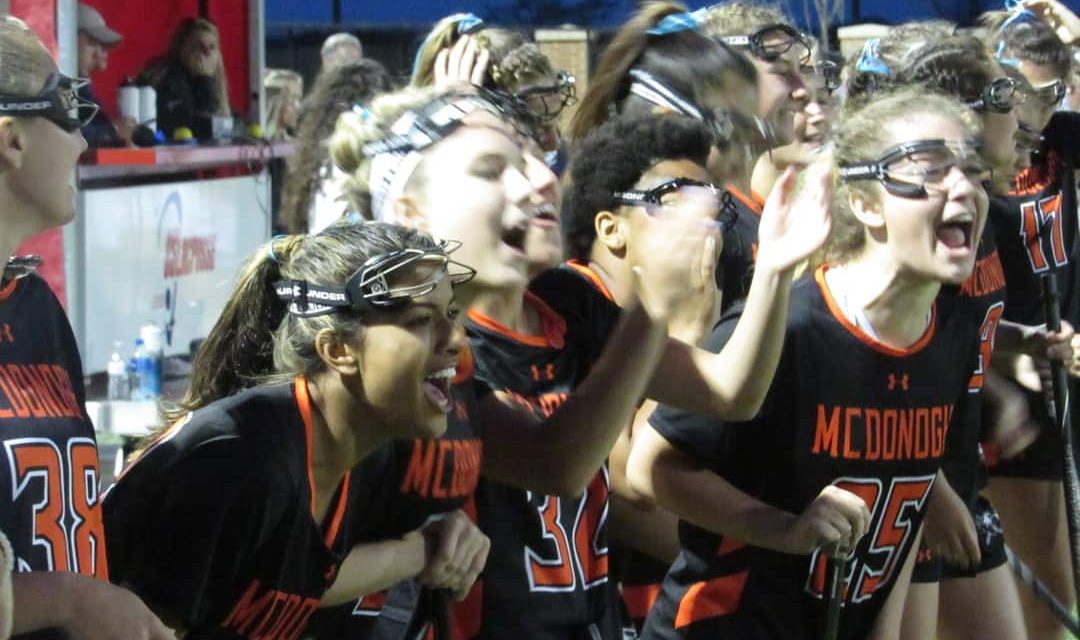 McDonogh tightens grip at No. 1; Century, St. Mary’s moves up

After two impressive showings, McDonogh School is the undeniable No. 1 in this week’s VSN’s Girls Lacrosse Top 20.

The Eagles routed then-No. 3 Glenelg Country School at home, 20-8, followed with a dominant second half in a 13-5 decision against 5th-ranked Notre Dame Prep at US Lacrosse in a rematch of last year’s IAAM A Conference final. The Eagles will be the top-seed for the IAAM A tournament which starts later this week.

McDonogh School is No. 1 followed by Severna Park, Glenelg, Glenelg Country School and Notre Dame Prep. Century and St. Mary’s are up to 12th and 13th respectively. Westminster falls out the poll after a pair of tough one-goal defeats.

Pictured above: McDonogh reserves are excited in the final minutes of last week’s victory over Notre Dame Prep at the US Lacrosse Complex in Sparks. The Eagles are again No. 1 in this week’s VSN Girls Lacrosse Top 20.

This week: at Gerstell Academy, Apr. 30

This week: vs. Sparrows Point, May 1; at Episcopal Academy (PA), May 2

This week: at Urbana, May 3

This week: vs. Institute of Notre Dame at Coppermine Field at DuBurns Arena, Apr. 30; at Park School, May 2