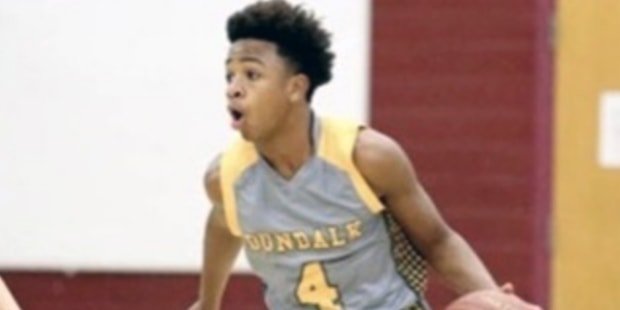 Owls defeat the Lions for the third time in four years, striking a major blow to the Dulaney’s Baltimore County title hopes

Once the prohibitive favorite to win the Baltimore County boys basketball championship, No. 6 Dulaney took it on the chin for the second time this week, losing on Friday to unranked Dundalk, 78-66, making it unlikely that the Lions can win their division and reach the County championship game.

Dundalk made a statement right from the start, stunning the home crowd with a 21-8 first quarter run and virtually locking up the game by halftime as the Owls built a 42-20 lead. Dulaney battled back in the second half and got within eight, with a just under a minute to play, but the Owls converted 4-of-5 free throws in the final 30 seconds to secure the win.

The Lions (12-3, 5-2 BaltCo DI) entered the week with a sparkling 11-1 overall mark and undefeated in Division I of Baltimore County. On Wednesday, however, No. 7 New Town stunned Dulaney on his home court with a surprisingly easy 78-54 rout. The Lions got a tougher than expected challenge from Loch Raven, on Thursday, before leaving with an 86-74 road win, only to return home and get surprised by the Owls. The Lions now trail New Town (7-0) and Parkville (6-1), who the Lions dismantled, 106-45, two weeks ago, in the Division standings.

Although Dundalk has success with the Lions in recent seasons, it was the first time in school history that Dundalk had won a game on Dulaney’s home court.

Dundalk improved to 9-5 overall and 3-3 in Baltimore County Division I. The Owls are currently tied for fifth place with Loch Raven and Milford Mill, and all five of their losses have been by five points or less, including two in overtime.

Senior guards Michael and Jaylon Johnson carried the scoring load for the Owls, netting 21 and 20 points, respectively. Dulaney’s Ryan Conway led all scorers with 29 points and Che Evans, Jr. added 17 for the Lions.

Owls defeat the Lions for the third time in four years, striking a major blow to the Dulaney’s Baltimore County title hopes