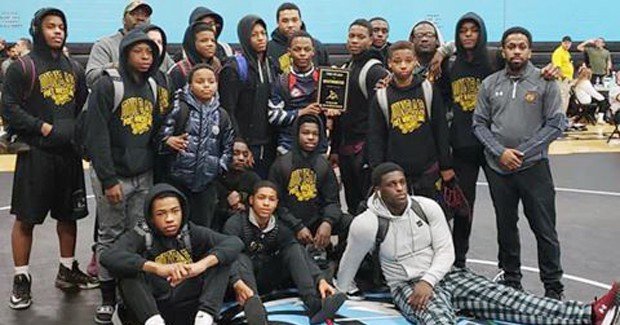 City powerhouse sweeps the field with a 9-0 record

Dunbar’s wrestling team has been full of talent in recent years. The Poets won a dual meet region crown in 2016, but other than that season the roster has had its share of holes. This year coach Doug McClain is running out a full squad.

That difference shined through at last week’s Westminster Duals, as Dunbar’s depth allowed them to bring home the title with a perfect 9-0 showing.

“I think our secret ingredient in this tournament was attrition,” said McClain. “I watched Hammond and Linganore drill and they were crisp, very smooth. Our guys have a bunch of experience as well, but when you add physicality and athleticism to it, you could see us pulling away in the second and third periods. And with this being the first real test this season, I was happy with the results.”

One of Dunbar’s closer battles was with Hammond, who came within three of the Poets, 36-33.

Linganore, on the other hand, gave the Poets all they could handle in a match that came down to the wire and ended in Dunbar’s favor, 37-36. Linganore recently downed defending 4A State Dual Meet Champions Urbana in a Frederick County dual.

“In the Linganore match, I thought the key would be to not let their pinners (Dalton Pearl and the Bromley Twins (Joey and Michael) put sixes up. We turned that 18 points into only 12 for them. Aaron Scott won the dual for us with a pin with five seconds left.”

Nyck Simpson was 8-1 at the duals, saving team points in his only loss, 8-4, to Linganore’s Joey Bromley (No.8 at 170 in BillyB’s Maryland State Rankings). Valentino Pryor (160) was 7-2 over the two days and he too kept bonus points off the board versus the Lancers. State-placer Dalton Pearl (No.7) could only muster an 8-2 win over Pryor.

Valentino’s brother, Jorden, who is a two-time state champ and VSN’s 2017-2018 Upperweight Wrestler of the Year, came out of the event unscathed and has gone 39-0 over his four years at the Westminster Duals. The only real challenge Pryor (No.1 at 285) faced was from Franklin’s two-time state placer Elijah Solomon (No.4 at 220). Pryor tallied a 7-3 win over the Indian.

City powerhouse sweeps the field with a 9-0 record