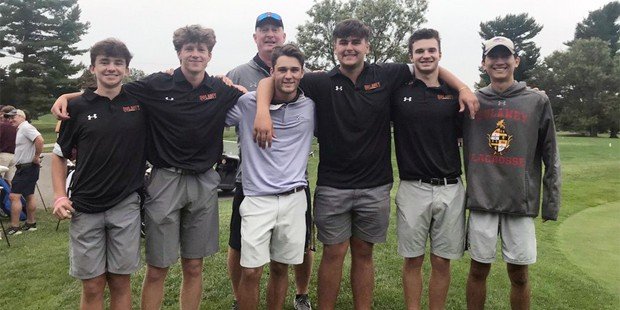 Charlow wins the individual title as the Lions qualify for states

It was the fourth consecutive time the Lions have won the District VI crown, dating back to 2017, with the event not being held last fall because of COVID-19 shutdowns.

Even with the team title, Dulaney needed shoot 316 or better to qualify for states and the Lions did that with ease, posting a 304.

Charlow, a senior, shot a 69 to finish on top. Senior Joe DiPino and junior Drew Dannenfelser each carded a 78 to tie for 8th place and freshman Quinn Collins came in one stroke back, at 79, to tie for 10th place.

“Nick has been consistent and a great leader of our team this season and over the past four years,” said Dulaney head coach Mike Wall of Charlow.

“Drew has improved significantly over the season,” added the coach on Dannenfelser. “I can’t wait to see how he plays next year.

Over the last five season, under Wall, the Lions have gone 40-0 in regular season matches and have won two consecutive Baltimore County titles with an opportunity to make it three straight coming up on October 13th.

Dulaney’s top four golfers will compete in the Maryland State Tournament at the University of Maryland.