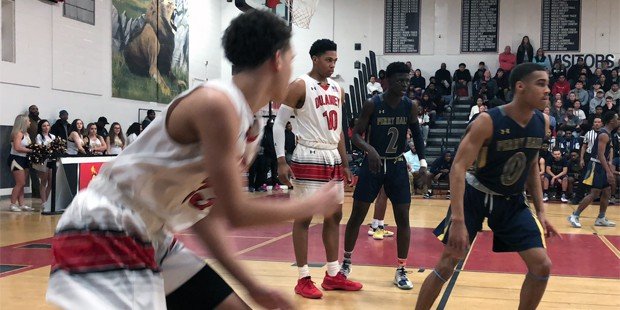 No. 9 Lions build a 43 point-lead in 4A state Sweet 16 mismatch; next up Springbrook  for a shot at College Park (VIDEO INTERVIEWS HERE!)

Judging by his squad’s performance, he should be.

For three straight years, Dulaney had reached this game and three straight times the Lions’ season came to an end at the hands of their arch-rivals. But this Dulaney team, although still young, is now battled tested while the nucleus of the Perry Hall teams which won three straight regional titles and back-to-back state crowns is gone. 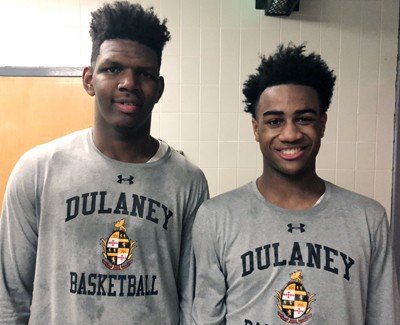 The Gators, however, proved over the last several weeks that will had some bite, and they came in with a lot of confidence after a dramatic triple overtime victory over Mervo in the sectional semifinals on Monday.

“They’ve knocked us off in this section final three straight years and they’re, honestly, at this point in the season, playing great basketball,” said Lochte of Perry Hall. “We had beaten them earlier in the season. This was a different team, a talented team coming in, a team that was meshing and gelling. So, this Perry Hall was a good team. They were no slouch.”

Confident or not, the Gators were over-matched on Wednesday by a Dulaney team that was relentless.

Perry Hall came in determined to go toe-to-toe with the Lions, running up and down the court and attacking the basket with aggression. Unfortunately for the Gators, they were unable to score the basketball with same efficiency as Dulaney. After an early 5-4 lead, the Gators fell behind by 12 in the opening quarter and things only got worse from there.

Perry Hall had no one able to match the interior power of Dulaney junior Cameron Byers, a transfer from John Carroll School who played on the Patriots’ MIAA A Conference championship team last winter. Byers scored nine points in the first quarter and finished with 20 for the game.

The Lions got plenty of production from their other stars as well, with sophomore Ryan Conway netting a game-high 24 points, Che Evans, Jr. scoring 17 and sophomore Isaiah Cornish finishing with 16 points.

Dulaney continued to pour it on in the second quarter, scoring the first nine points of the stanza to fuel a 13-1 run that stretched its lead to 37-13. Perry Hall did manage to stage two separate 5-0 surges in the quarter to climb back within 19, but a three by Cornish and a short jumper by Byers helped the Lions take a 47-25 lead to the break.

“Our pace of play fatigued them,” added Lochte. “We made shots. As they got fatigued, we continued to make shots. We pressured them, not just with defense, but also by scoring the ball.”

Conway, who has emerged as one of the top scoring guards in the metro area, expressed how much the Lions like to run.

“Our team is best at transition,” said Conway. “We’re not as good a half court team, as we are a transition team. We have guys who can get out and fly with the ball. We have something called Phase III, where we push the ball and push, push, push. I feel like we are at our best when we are in Phase III.”

Conway also recognized the importance of finally getting past the Gators and this spot in the tournament.

“It’s huge. It was three straight years they knocked us off in this same game. I feel like my teammates and I, we play well together. We got the job done.”

Byers, who has been a huge addition to the Lions’ lineup, explained his role on the team.

“I really wanted to come over and contribute in a leadership role,” said Byers. “They needed me to come over and lead. For me, it’s not about the points or the individual accolades. I’m bringing the experience I had over there (John Carroll), over here and lead some of these young guys.”

Lochte pulled his starters early in the fourth quarter and Perry Hall coach Joe Carlineo soon did the same as the Gators won the battle of reserves 14-8 to set the final margin of victory at 36.

“Credit Dulaney,” said Carlineo. “They took it to us from the very beginning. We missed a lot of layups, a couple of dunks, and they are a bigger team. We knew this was going to be a fight and we came up pretty short tonight.”

Clear of this hurdle, Lochte is looking for a similar performance against Montgomery County’s Springbrook Friday evening as the Lions attempt to reach the 4A state Final Four.

“We know what we are capable of when we stick to the script, buy into our game plan, buy into our roles and we did that tonight.”