Although you’d never know it by the way she played against Fallston in a UCBAC Chesapeake Division girls lacrosse showdown, Kate Walsh said that she has had trouble learning how to be adept at taking draws. 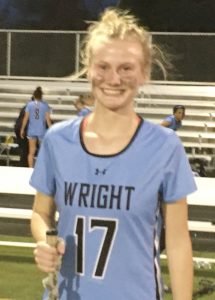 With senior Kate Walsh (above) taking draws and a combination of senior Kendyl Lepp and juniors Katie Roszko and Caitlin Hetrick rotating on the wings, C. Milton Wright dominated time of possession on Monday night, as the Mustangs rolled to a 15-6 victory to claim the UCBAC Chesapeake Division title.

Regardless, the C. Milton Wright senior appeared to know exactly what she was doing in the middle of the circle on Monday night, either winning possession cleanly off the draw or nudging the ball out to any of the three wings — senior Kendyl Lepp or juniors Katie Roszko and Cailin Hetrick — to scrap for ground balls.

That foursome combined to win 17 of the game’s 23 draws, which gave the No. 15 Mustangs’ offense plenty of time to overcome a slow start and roll to a convincing 15-6 victory over the 13th-ranked Cougars in Bel Air.

“Taking the draw has been a little tricky for me,” said Walsh, a York College commit. “It took me a little while to get the hang of it. But (the wings) really trust each other and we were able to set up each other for success.”

Trailing, 2-1, Roszko netted the equalizer with 16 minutes, 40 seconds left in the first half before Hetrick dodged inside for a goal that would give CMW (7-3 overall, 4-0 UCBAC Chesapeake) the lead for good three minutes later.

Back-to-back goals by sophomore attacker Shelby Sullivan and Hetrick ballooned the lead to 5-2 until Fallston senior attacker Olivia Bagosy temporarily stopped the run to make it, 5-3.

Less than a minute later, Sullivan answered and Walsh whipped in a one-timer with 1:44 left in the opening period to give the Mustangs a 7-3 halftime cushion.

Walsh and her wings kept giving her teammates opportunities, and it paid off handsomely when Wright went on a 6-1 run to open the second half that all but locked up the Chesapeake Division title.

The Cougars (8-2, 4-1 UCBAC Chesapeake) just had no answers for the Mustangs’ draw prowess.

“My predecessor used to say, ‘Win the draw, rule the world,’” Fallston coach Madalyn Palko said. “(Wright) had all the momentum and we just had to play a lot of defense. And they kept finding ways to score. That’s what good teams do.”

Walsh said that she expected a closer game, given that that Wright fell once to Fallston last spring and pulled out an overtime win to gain a split in their two 2021 encounters.

“We just came into the game super fired up,” she said. “We had lots of hype and energy.” 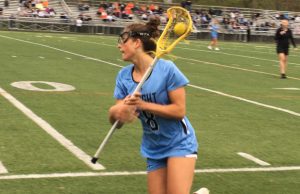 “We put in a max effort tonight,” she said. “Kate was really good about getting the ball out to our wings.”

“The girls kept their heads up looking for feeds,” she said. “Our ball movement was really good.”

Palko’s team will have scant time to brood about the setback, seeing as how it plays Elkton Tuesday and Patterson Mill two days later.

“We can’t sit and think about what we need to do,” she said. “We need to regroup and focus right away.”

Likewise, C. Milton Wright has four games remaining, starting with North Harford on Thursday, and including a challenging encounter with undefeated and No. 6 Century May 5.