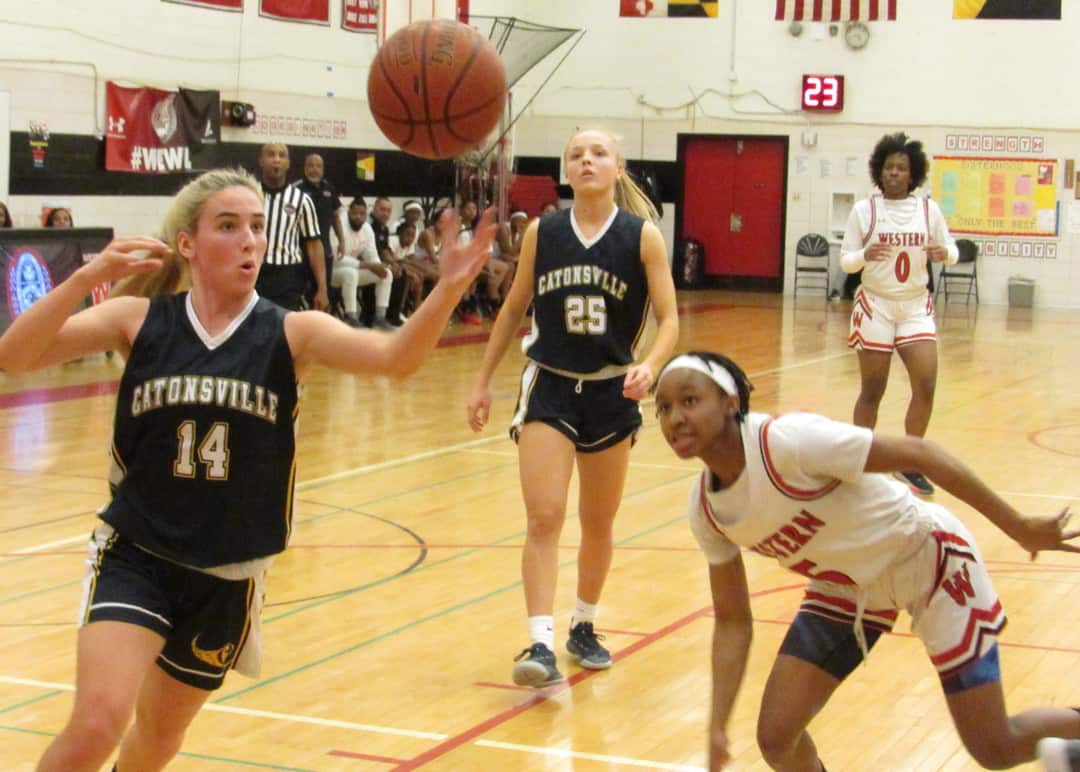 Catonsville’s Jen Lewis (14) goes after a loose ball ahead of Western’s Ny’ceara Pryor during the first half of Wednesday’s Class 4A North Region I girls basketball title game. The No. 8 Doves claimed their second straight region crown with a 66-35 victory over the Comets in Baltimore City.

“As a team, we performed great. But overall, we won a regional championship but it’s all about that state championship,” Pryor said.

Pryor and the No. 8 Doves have unfinished business and took another step with a cozy 66-35 victory over Catonsville in Baltimore City. Pryor finished a game-high 23 points and nine steals for Western, and Gabrielle Johnson added 16.

The Doves methodically pulled away from Catonsville, securing a second straight region championship. The Falls Road school will host either Paint Branch or Clarksburg from Montgomery County in a 4A Elite Eight match Friday.

Under a new format, eight region champions (two each from East, West, North and South) are reseeded based on their regular season winning percentage.

Western is hoping to end the drought behind Pryor, one of the area’s most dynamic guards. Her unmatched speed and staggering defense was on full display Wednesday.

Pryor recorded four steals in the first quarter to spark a 15-3 scoring run as Western led 18-10. The Doves led 33-18 at halftime.

It all started with Pryor, who helped the Doves extended their lead to 50-26 entering the fourth.

Said Pryor: “I think it was very important for me to get going. I created a lot of energy on the court and off the court so (my teammates) feed off my energy. When I go, they go.”

Maddi McLean led the way with nine points and six rebounds for Catonsville (16-9), and Ashley Dickey chipped in with seven points and five rebounds.

Comets coach Mike Mohler said his team couldn’t get into an offensive rhythm.

“I thought we hurt ourselves. They cover a lot of ground because they’re so quick,” Catonsville coach Mike Mohler said.

The game plan was to play slow and controlled basketball, Mohler added, but due to a number of errant passes the Comets found themselves in a deficit they couldn’t recover from.

“We have a bunch of great kids and they worked hard all year. It’s a shame when we didn’t play our best today,” Mohler said, reflecting on Catonsville’s season. “We had a good year.”

The Doves have only one senior – City College transfer Henson – in the starting lineup. Western took No. 1 Poly to the final seconds before falling in the Baltimore City final last week at Morgan State University.

Robinson thinks the Doves are ready to take the next step.

“The states is the ultimate goal. We will get there, we’re young, but I’m excited for my young team,” said Robinson. “We finally grew up… everyday since Nov. 15 until now, and we’re still growing.”

CLASS 4A NORTH REGION I FINAL