No. 6 Western drowns Paint Branch in second half for 4A state girls basketball Final Four spot; Gray and Rideout combine for 39 (VIDEO HERE!) 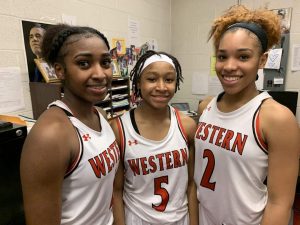 The underclass trio of Sanaya Gray (left), Nyceara Pryor and Vashae Rideout combined for 55 points for No. 6 Western in a 66-43 victory over Montgomery County’s Paint Branch in the Class 4A North Region girls basketball final Saturday. The Doves will play Prince George’s County’s Charles H. Flowers in the 4A state semifinals, Thursday afternoon at SECU Arena.

There was some reservations entering the season about the Doves, and whether its talented newcomers would mesh with the veterans and last year’s newcomers. It’s been far from smooth, but Western appears to be hitting its stride at the right time, and right on up to Towson University.

The No. 6 Doves are back in the state Final Four after a 66-43 victory over Paint Branch in Baltimore City. Sophomore guard Sanaya Gray finished with 21 points for Western (22-4 overall), and Vashae Rideout added 18.

The Falls Road school pulled away from the Montgomery County squad over the final 16 minutes, claiming their first region title since 2016. The Doves will take on Prince George’s County’s Charles H. Flowers, Thursday evening at 7 at SECU Arena.

“Like Coach [Townsend] said this is ring season and we want it all,” said Pryor. “We’re not stopping at regions. We’re going all the way and get this ring.”

After a lashing from Townsend in the huddle, Western sped past the Burtonsville school in the fourth quarter. The Doves held Paint Branch to two field goals the entire second half.

Townsend said the huge crowd distracted her team a bit.

“They couldn’t get into a rhythm because there was so much going on, I told them to lock in and stayed focused,” said Townsend. “This isn’t the only crowd they’re going to come up against with all that noise. Once they settled in, we played our basketball.”

Leading 27-25 at halftime, Western padded its advantage to 38-30 behind baskets from Gabrielle Johnson and Gray and two free throws from Rideout. The Doves led 41-36 after three.

Western got into rhythm as Johnson and Rideout each got to the basket with relative ease. Gray dropped a 3-pointer pushing the lead to 48-38. Pryor got an inbound pass, streaked down the court and converted a 3-point play.

Johnson and Pryor continued attacking and converted easy baskets. Rideout followed up her own miss, giving Western a commanding 57-38 cushion with 3:40 left in regulation.

“We trust each other more,” said Rideout. “As our confidence grow, we’re playing more as a team.”

“There’s a lot of personalities and I have to specified each role,” said Townsend. “If we’re going to do this we have to do it as a team.”

Pryor added 16 points to Western’s cause. Johnson scored all eight of her points in the second half.

Katerra Myers led Paint Branch with 19 points. The Panthers, who lost for the second straight year in the 4A Elite Eight (lost at home to Catonsville last year), didn’t make their second basket of the second half until the final seconds of regulation.

Legendary Doves coach Breezy Bishop presented the team the North Region championship plaque Saturday. It’ll be the 16th state Final Four for Western, which last won a state title in 1995 when Bishop was nearing the end of her iconic tenure.

Likely the youngest squad in this year’s state 4A field, the Doves are thinking big.

“It means a lot taking this group. They’re young and I want to keep them focused and hungry,” said Townsend. “They know what we want to do, they know what’s in front of us. Now, they just got to finish strong.”