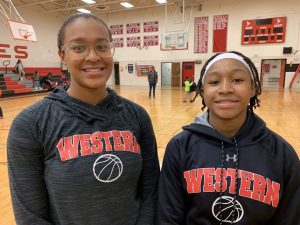 Senior Destiny Hawkins had 13 points and freshman sensation Nyceara Pryor finished with a game-high 18 points for No. 6 Western in its victory over fifth-ranked Howard in the Class 4A North Region girls basketball semifinals Thursday. The Doves will host Montgomery County’s Paint Branch Saturday for the region title and a spot in next week’s state 4A final four at Towson University.

Well, “Lil’ Mama” has had a ginormous effect on Western High.

The sixth-ranked Doves defeated No. 5 Howard, 62-45, in the Class 4A North Region Section I final Thursday evening in Baltimore City. Pryor finished with 18 points and senior forward Destiny Hawkins added 13.

The Falls Road school ceased control in the second quarter, securing a spot in the 4A state Elite Eight. The Doves (21-3 overall) will host Montgomery County’s Paint Branch, Saturday afternoon at 5 for the region title.

Western is a win away from its first state final four since 2016 after ending two years of Sweet 16 disappointment. The Doves lost at Catonsville last year and fell to Howard in 2016 in Ellicott City.

“We came out strong and told them don’t let up,” said Townsend. “The girls are young but they’re getting it. It’s win or go home.”

“We pushed the intensity and kept it going,” said Pryor. “We played as a team.”

Vashae Rideout finished with 13 points for Western, which outscored the Howard County co-champ Lions, 25-11, in the second quarter, turning a 13-11 deficit into a 36-24 advantage at half. Pryor, a 5-foot-3 dynamo, who’s nearly unstoppable in the open court, had 11 points in the frame.

Since day one, Pryor, literally and figuratively, hit the ground running.

“When she’s out there, I see the fire in her eyes,” said Townsend. “It doesn’t matter what the score is or who she’s playing. You don’t get that from a lot of young players these days. She has no off switch.”

“i know a lot of my teammates and they welcomed me,” said Pryor. “They’ve kept pushing me, pushing me and told me I’m one of the leaders. I’m just leading.”

Howard (21-4), which ended Catonsville’s two-year reign as North Region champ in Tuesday’s section semifinal, was able to pull to 52-42 after a basket from Gabby Scott. Pryor quickly answered with a basket and sophomore post Dakota Fisher’s basket, pushed Western’s lead to 14.

“They’ve made a big impact and it’s going to continue,” said Hawkins. “We have to take them under our wings and teach them the ropes.”

The Doves have shown vast improvement since a blowout loss to Mount de Sales Academy at the Holly & Hoops Tournament during the holidays. Their only losses since has been to eventual IAAM A Conference champ and top-ranked St. Frances Academy and fourth-ranked Poly in the Baltimore City final at Morgan State University.

Western is looking forward to challenge Saturday against Paint Branch.

“They’ve earned it. We made this a mission and we’re doing it together,” said Townsend. “Each girl has a special part in this.”