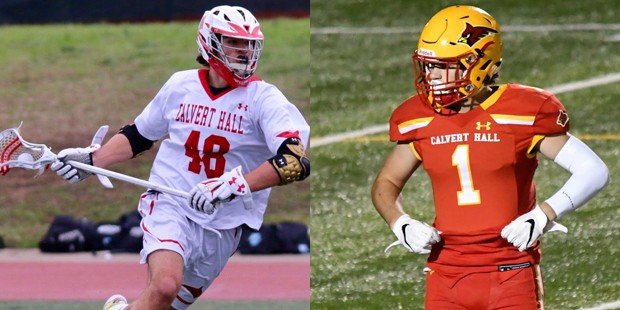 Cole Herbert has a dilemma that only supremely gifted athletes face.

The talented Calvert Hall College junior is being courted for his talent as a top-notch receiver in football by a growing number of Division I programs, including the Air Force Academy and Big Ten member Rutgers.

And, as the nation’s top-rated midfielder in his class, Herbert has his pick of the nation’s top college lacrosse programs, including North Carolina, which has stocked its lax roster with a steady stream of premier Calvert Hall talent for the better part of the last decade.

Herbert has yet to figure out which sport suits him best. 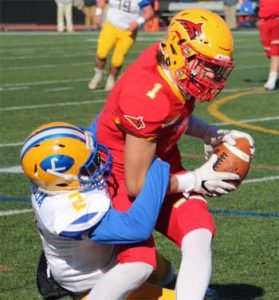 Targeted as one of the nation’s top lacrosse players before he even began his high school career, Cole Herbert has been increasingly coveted by college football recruiters as well and the junior is now evaluating his options in both sports.

While he still has time to make a decision that will affect the rest of his athletic career, the 6-foot-3, 215-pound standout will eventually have a deadline for lacrosse — The National Letter of Intent signing day for all sports, other than football and basketball. is Nov. 13.

Yet with the possibility that his senior year of football could produce more offers, Herbert is naturally considering every athletic avenue.

If he does opt to play lacrosse in college, he only has eyes for UNC.

He said that he has an excellent relationship with Carolina coach Joe Breschi, who is fully aware that Herbert has drawn interest from football recruiters.

“Coach Breschi and I talk all of the time, and he’s been very supportive. I’m not leaning one way or the other right now,” Herbert said. “I’ll just have to see what my final options are before I decide.”

His favorite sport, he said, is the one he’s playing, at any given time.

In other words, in the fall he’s all about route-running, getting separation and high-pointing a pass.

In the spring, he uses finely-tuned stick skills to make opposing defenses wary of getting burned by pinpoint passes or rocket shots.

Either way, he has helped the Cardinals to successful seasons in both endeavors, considering that the football team was No. 2 in the VSN final rankings and No. 1 in lacrosse for the second year in a row.

The football team racked up a program-best 12 wins last fall while Herbert finished the season in grand style by catching touchdown passes of 25, 23 and 10 yards on just four targets from sophomore quarterback Amir Jenkins in a 40-7 triumph on Thanksgiving against archival Loyola Blakefield.

That wasn’t his only big game, either.

Herbert also totaled six receptions for 70 yards and carried the ball three times for 17 more yards and punched in the go-ahead TD in a 21-7 victory over Archbishop Spalding in October.

Herbert then burned the Cavaliers for a TD on a 17-yard grab of a Jenkins aerial as the Cardinals captured the Maryland Christian Schools Invitational championship, 35-21, the weekend before the Turkey Bowl.

He finished the 2018 campaign with 12 touchdown catches and 850 receiving yards. 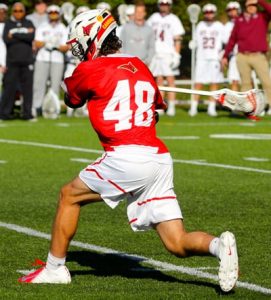 A powerful midfielder with a blistering shot and an passion to play defense, Herbert is a huge reason why Calvert Hall has won back-to-back MIAA A Conference lacrosse championships.

Last spring, Herbert was one of the main reasons why Calvert Hall claimed its second consecutive MIAA A Conference lacrosse title.

His earliest contribution toward a repeat was a three-goal, one-assist effort in an 11-7 decision over Gilman in the conference opener last April and he closed the regular season with the same totals in a key 10-4 victory over Loyola that earned the Cards a playoff bye.

Herbert added four more points on two goals and a pair of assists in a 15-9 verdict over the Dons in a semifinal a couple of days later.

His sophomore year was so successful (30 goals, 19 assists) that evaluators from Inside Lacrosse picked Herbert as the sixth overall junior recruit in the nation and the overall No. 1 midfielder in that class.

He was a second-team All-Metro pick by the Baltimore Sun in both sports, adapting skills from each to hone his craft.

“The movements are similar (in both sports),” he said. “But in football when I’m running a route, I know where I’m going. In lacrosse, I play it by ear.”

Herbert was primarily a defensive back as a freshman football player and even played some safety last fall, a role that he sees expanding next season.

Catching the ball, though, is what Herbert does best.

“I think some DB’s (defensive backs) try to trash-talk Cole,” Calvert Hall football coach Donald Davis said. “But then he gets up to the line and they say to themselves, ‘He’s a little bigger than I thought. And he’s a little faster, too.’ Cole gets separation with ease and he catches the ball. He never appears to be fighting the ball as it comes into his hands. As far as soft hands go, he’s right up there with best I’ve ever coached — Trevor Williams and Morgan Scroggins.”

Williams just completed his third year in the NFL with the Los Angeles Chargers and Scroggins played for Towson, so Davis’ comparison speaks to how highly he regards Herbert.

Herbert’s Turkey Bowl performance is a case in point.

On all three TD passes, he appeared to be well covered until Jenkins’ well-placed aerials arrived and Herbert snatched them.

“Amir and I have really good chemistry,” Herbert said. “He knows where to put the ball for each kind of coverage. And I know what I have to do to secure the catch.”

In lacrosse, Herbert plays as well on the defensive end as he does on offense.

“He’s dominant at both ends of the field and a complete midfielder,” Calvert Hall lacrosse coach Bryan Kelly said. “He can score and feed off a dodge. Most people don’t know what a great passer he is. He finds people.” 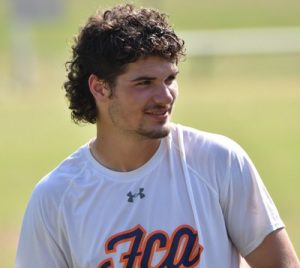 Herbert plays his summer lacrosse with the Fellowship of Christian Athletes, with several other high profile Baltimore area prep stars, where he has improved his game on and off the field.

His Fellowship of Christian Athletes club coach, Pat Smith, said that Herbert, who runs on the same midfield line with Loyola’s Jack Koras and Ryan Evans of Boys’ Latin, has grown by leaps and bounds in terms of maintaining his poise when play becomes heated.

“He’s aggressive on the field — and I really like that,” Smith said. “But he’s really matured, and he takes that aggression and turns it into something positive.”

With his most daunting athletic hurdle — choosing which sport to play at the next level — still ahead, Herbert will have his family and coaches helping to guide him.

It’s 100 percent his choice,” said his father, Jamie Herbert. “He is the one who must do the work, and hopefully get the enjoyment of playing. His mom and I will be advisers on which school he chooses pointing out positives and negatives. We are taking (college) visits and helping him ask the right questions to coaches and administrators. Important areas of interest to us are academic support, family aspect of the team, coaching philosophy and the school’s alumni network and career path after the sports fun is over.”

Although he’s a former teammate and longtime friend of Breschi’s, Kelly said that he’s not necessarily pointing Herbert toward the Tar Heels.

“I want what’s best for Cole, period,” Kelly said. “I just want him to be happy.”