No. 14 Perry Hall survives a shootout with No. 4 Severna Park to win its second straight 4A girls soccer state title 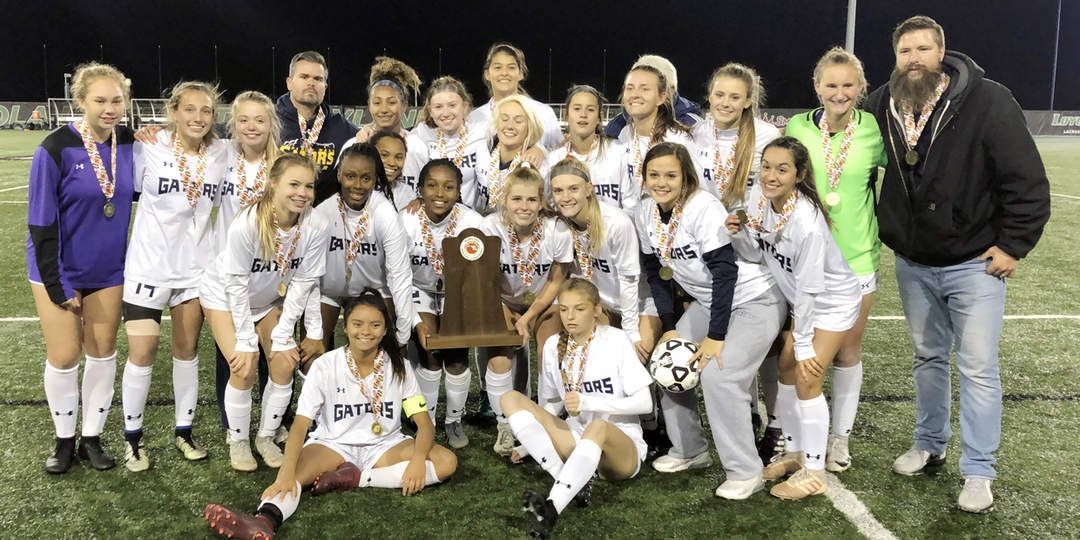 When Severna Park’s Toni Fiocco-Mizer shot wide left to leadoff the fourth round of a penalty kick shootout in Friday night’s 4A girls soccer state championship, the Perry Hall sideline mistakenly stormed the field and piled up in a massive celebration around the penalty circle.

There was just one problem, the shootout was not over.

The 14th-ranked Gators, after battling the No. 4 Falcons to a 0-0 double-overtime draw at Loyola University’s Ridley Athletic Complex, led 3-2 heading into the fourth round, but shootouts must go a minimum of five rounds, or have one team establish a three shot margin after three rounds or a two shot margin after four. By the time order was restored and the Gators realized their mistake, they had to refocus.

Mackenzie Click missed high right on a chance to clinch back-to-back crowns for the Gators and Lauren Campbell followed with a made kick for Severna Park to square the shootout at 3-3. The Gators missed high again to close the fifth round, as did the Falcons to start the sixth. That brought senior Erin Marciszewski to the dot for Perry Hall.

Calmly, Marciszewski struck the ball inside the left post and this time the celebration was on for real.

“During the first two rounds of PK’s, I was so nervous, butterflies, shaking, so nervous” said Marcizaewski. “Then, it got up to my turn and I ran up. I heard all of the stands, crazy, I was so nervous. The whistle blew everything went silent. I didn’t hear a thing. I just looked at the ball, chose my corner and shot. I knew I had to keep my calm.” 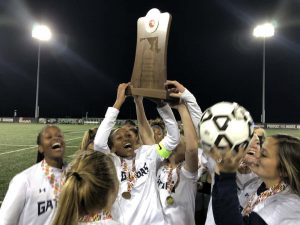 After one false alarm, Perry Hall senior Aya Neal (with trophy) and her teammates were finally able to celebrate a second straight 4A girls soccer state championship title.

The final celebration was not anti-climatic, but it did take a moment to combust as the Gators made sure their back-to-back dream was truly complete this time. Smoot claimed responsibility for the initial false alarm.

“I was keeping score,” he said. “There was a miscue with the refs up top and me. I thought for sure he said, ‘there you go, you guys got it.’ I don’t know if he meant ‘you have to go ahead and kick the next one,’ but, of course, we’re on a hair trigger there at that point. That we hadn’t gone through five kind of slipped out the window. That in itself could have broke us.”

The celebration was convincing. Initially, even the Severna Park (15-3-2) players seemed resigned to the fact they may have already lost, but once the referees re-set the teams, Perry Hall senior Mackenzie Click missed high right to complete the fifth round. The Falcons then evened the shootout at 3-3 when senior Lauren Campbell converted inside the left post. Again, with a chance to win, the Gators came up empty on a high blast by senior Zaida Holloway.

Severna Park opened the seventh round also with a miss high, by senior Oliva Altman, setting the stage for Macizaewski’s heroics.

“For them to push through that and pick each other up, to get each other’s backs, that made it pretty awesome,” said Smoot.

Neither team seriously threatened to take control during 80 minutes of regulation or during two 10-minute overtime periods, where just one goal may have done the trick.

A senior meshed backline for Perry Hall (12-6), comprised of seniors Caronline Warns, Aya Neal and Caroline Rosenthal made all the right plays to blank a Falcons squad, which often appeared to be just one connection from a breakthrough.

Warns made a spectacular head save, midway through the second half, when Severna Park’s Campbell triggered a 15-yard blast midway up the right post, as Perry Hall goalkeeper Brenna Ellenberger got tangled in traffic out front. The Gator defense also nicely handled a couple of dangerous corner pieces by the Falcons. Ellenberger, who had six saves, later made a nice play on a sliding stop. Her Severna Park counterpart Katie Byrd (five saves), along with the Falcon defense, also covered all the bases.

This Perry Hall squad was not just a case of a great squad going back to back. It was a very young team which was completely reconfigured after the graduation of so much key talent. Smoot tinkered with various lineup combinations as the team struggled to a 4-6 start, but eventually settled on his senior back line and everything fell into place.

“Based on our youth, it is something I did early on just to move them around, move our athleticism and move our talent around,” said Smoot. It worked for a little bit and it got a lot of people reps, but they finally put their foot down and said ‘we want to be on the backline and we want to be together.’ Since that time, they really clicked in and took over, became leaders out there.”

The Gators rallied to win their final three regular season matches and then won four straight playoff games by a combined score of 14-1 to return to Ridley. Perry Hall finished the post-season with just one goal allowed in five games.

As for Severna Park, there was just one missing ingredient according to head coach Rick Stimpson.

“The girls have played incredibly well through every game including tonight,” said Stimpson. “The one thing I said that we talked about in the locker room is at a time like this, the end of the season, you have to be good and you have to have a bit of luck. We were good, but we just didn’t have the luck we needed. I couldn’t have been more proud of the team as a whole they’ve been great all year.”