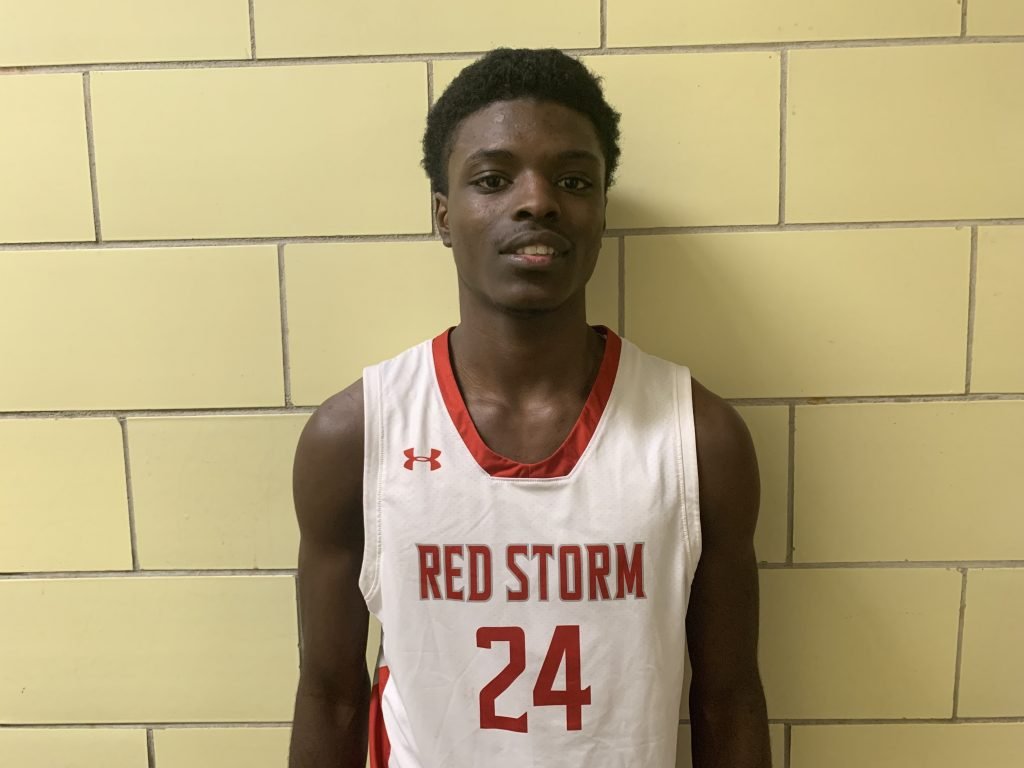 Kelvin Martin was the hero for Edmondson boys basketball team Tuesday. The senior reserve drained a 3-pointer with 3.4 seconds left in regulation, giving No. 14 Edmondson a 50-49 victory over 12th-ranked Patterson for a berth in the Baltimore City title game against Lake Clifton next Tuesday evening at Dunbar.

Kelvin Martin did a variety of things on the football field for Edmondson High. However, when it comes to the Red Storm basketball team, the senior has one – and only one – skill: shooting.

Tuesday evening, Martin did his job and the Red Storm are going to the Baltimore City championship game. His 3-pointer with 3.4 seconds left in regulation lifted No. 14 Edmondson to a 50-49 victory over 12th-ranked Patterson to clinch the top spot in the city league’s Division A.

Senior forward Antwan Bennett scored 11 points for the Red Storm (16-1, 6-0 Division A), and London Hinton and Garren Edwards added 11 and 10, respectively. John Thomas finished with a game-high 17 points for Patterson, and sophomore Caleb Burgess had 12.

Edmondson will meet seventh-ranked Lake Clifton for the city title next Tuesday (Feb. 22) at Dunbar at 7 p.m. The Lakers secured first in Division B with a 55-53 decision over No. 15 City College in East Baltimore.

The Red Storm are headed to “Eastside Gardens,”  the nickname of Dunbar’s fabled gym, thanks to Martin, who got a pass from senior teammate London Hinton on the wing near Edmondson’s bench and sent an arching 25-foot dagger through the net. He was mobbed by teammates and fans after Patterson’s final shot caromed off the backboard.

It was Martin’s only points of the game.

“Set your feet and shoot your regular shot. That’s what I did to finish the game for me and my brothers and coaches,” said Martin. “When it left my finger tips…it was game, we won.”

“When it mattered, he hit the shot, that’s our guy,” said Bennett. “We all knew it was going in. That’s what it takes to win games, keep our head in it.”

It was a typical city league grinder where it’s often mental attrition. Edmondson trailed 8-0 in the opening minutes and didn’t lead until early in the fourth.

“My hat goes off to Patterson, but my kids didn’t give up. We didn’t play a good game,” said Red Storm coach Darnell Dantzler. “The kids didn’t get frustrated. They were a little down at halftime but we made some adjustments, cut down on the turnovers and picked it up on the defensive end.”

Trailing by nine points midway in the third, Edmondson worked its way into its first lead, 37-36, after Edwards converted two of free throws with 5:46 remaining in regulation. The West Baltimore school had its largest lead, 47-45, after a 3-point play from Malik Davis with 1:57 to play.

Patterson answered as Thomas, the city league’s top scorer, scored in the lane, tying the game with 1:35 remaining. The senior got a hand on Bennett’s attempt inside with about 40 seconds left, and Burgess got into the lane and laid the ball into the basket, giving the Clippers a 49-47 advantage with 14 seconds to play.

“He has no conscience…his job was to shoot the ball,” said Dantzler. “I told London, who had a good floor game today, get into the seam, Kelvin was to the left and Garren Edwards to the right. They were going to fade to London and Garren and Kelvin should be wide open.

We ran the play to perfection. Great shot by Kelvin. My hat goes off to the kids.”

Edmondson was in trouble immediately Tuesday, down 8-0 after a Thomas steal and layup. The Clippers led 15-5 after one before the Red Storm found its bearing and closed to 19-16 at halftime.

Patterson led 33-24 with 3:20 left in the third quarter before a 13-3 Red Storm run, put it behind for the first time. There were 10 lead changes and two ties over the final 5:46 as Martin’s late shot ended the Clippers’ 13-game winning streak.

“We had chances to push the lead in the third quarter but had dumb possessions. To their credit, No. 5 (Bennett) made enough plays for Edmondson and the big shot at the end, but we should’ve never been in position for it to come down to one shot,” said Patterson coach Harry Martin. “We missed a lot of free throws, missed a lot of layups…we played bad. They (Edmondson) were a lot tougher than us and outcoached us.”

The Red Storm, who last played in the city title in 2019 (lost to Patterson), will get a second shot at Lake Clifton, which rallied from a double-digit deficit late in the third quarter for a 49-47 decision in December.

Edmondson, which last won the city title in 2010, struggled in preseason with numbers because of COVID-19 regulations (athletes had to be vaccinated to participate in city interscholastic activities). City athletic activities were halted for nearly four weeks due a sharp increase in COVID-19 infections.

“Through all adversity for these kids to bounce back and play everyday…to stay focused in the classroom, we give everything to the kids,” said Dantzler. “When we lose, it’s on me. When we win, it’s all on the kids. We’re a family.”

“We’ve been pushing hard at practice and Coach has been working us hard,” said Martin. ““We got to keep going.”