No. 2 St. Frances slip past McDonogh for return trip to IAAM A basketball final; Reese and Gourdine combine for 43 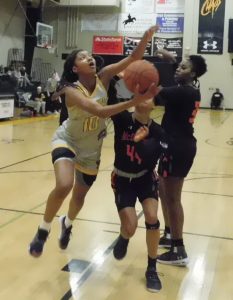 St. Frances’ Angel Reese drives to the basket as McDonogh’s Nekhu Mitchell defends during Friday’s IAAM A Conference basketball semifinal contest. Reese finished with 22 points as the second-ranked Panthers advanced to Sunday’s title match with a 61-56 decision over the No. 3 Eagles inside Phelps Gym in East Baltimore.

In a season of ups and downs, St. Frances Academy’s girls basketball is back in a familiar place.

After building a double-digit advantage in the second half, the East Baltimore squad deflected several McDonogh charges to move a step closer to a fourth straight championship. Sunday evening at 6 at Stevenson University, St. Frances will take on No. 1 Roland Park Country School for possession of the IAAM A championship glass bowl.

“Every game in this league is tough,” said St. Frances coach Jerome Shelton. “We value every victory.”

Due to attrition, including graduation of VSN Players of the Year Tyeisha Smith (2016; Hartford Community College), Mia Davis (2017; Temple University) and Nia Clouden (2018; Michigan State), the Panthers had to rely more on younger players and newcomers this season.

“It’s about patience and working as a team,” said Reese, “and being confident.”

“We applied a lot of ball pressure and played defense, and it just led to our offense,” said Gourdine, who’s developed into the Panthers’ second-best player this season.

McDonogh, which battled back from a 15-point deficit before losing at home to St. Frances last week, were again tenacious Friday. The Eagles drew to 43-41 early in the fourth after Aleah Nelson’s basket.

The Panthers answered early McDonogh’s assault, building up the lead to 50-43 after Gourdine’s basket with 5:40 left in regulation. The Eagles close the gap to 50-47 before a 5-0 spurt, featuring Reese’s drive and a Gourdine score following a Reese block, made it 55-46 with 2:22 to play.

McDonogh (20-6) would not relent. The Eagles were within 55-54 after two free throws from Jayla Oden with 49.5 seconds remaining. Reese found senior Madyson Hinton under the basket for a layup with 31 seconds left.

The Eagles missed a 3-pointer, and Gourdine shortly followed with two free throws with 9.9 seconds left. She added two more throws to finally put McDonogh away.

Or, “Turn Off the Lights,” as a DJ played Teddy Pendergrass’ classic R&B song following an Eagle timeout with 9.9 seconds to play. Nelson, an University of Cincinnati recruit, led the Owings Mills school with 17 points and Oden added 15.

For the first time since 2011, McDonogh will not play in the IAAM A final.

“We had stretches where we get down by 10, 11, 12 points and have to spend so much energy to get back in it. We kept fighting, that’s all I can ask,” said McDonogh coach Brad Rees, whose team lost three games this season to St. Frances by a total of 20 points. “This may have been my most gratifying season.”

Shelton has been pleased with his team’s progression, though their inability to keep focus after building substantial leads, like Friday, has frustrated him. He knows St. Frances will need to play its best game of the season against top-seeded and top-ranked Roland Park Country School Sunday night.

The Reds itched closer to their first IAAM A crown with a 58-28 rout of seventh-ranked St. Vincent Pallotti Friday in the other semifinal. Roland Park, ranked No. 20 in the latest USA Today Super 25, hasn’t loss in league play this season including 62-46 and 58-57 decisions over St. Frances.

The former result ended the Panthers’ 45-game winning streak in IAAM A play.

“This is a young team and it’s been a rough season, but a lot of team chemistry has been built,” said Reese. “We’re just getting ready for Sunday…back to practice tomorrow.”