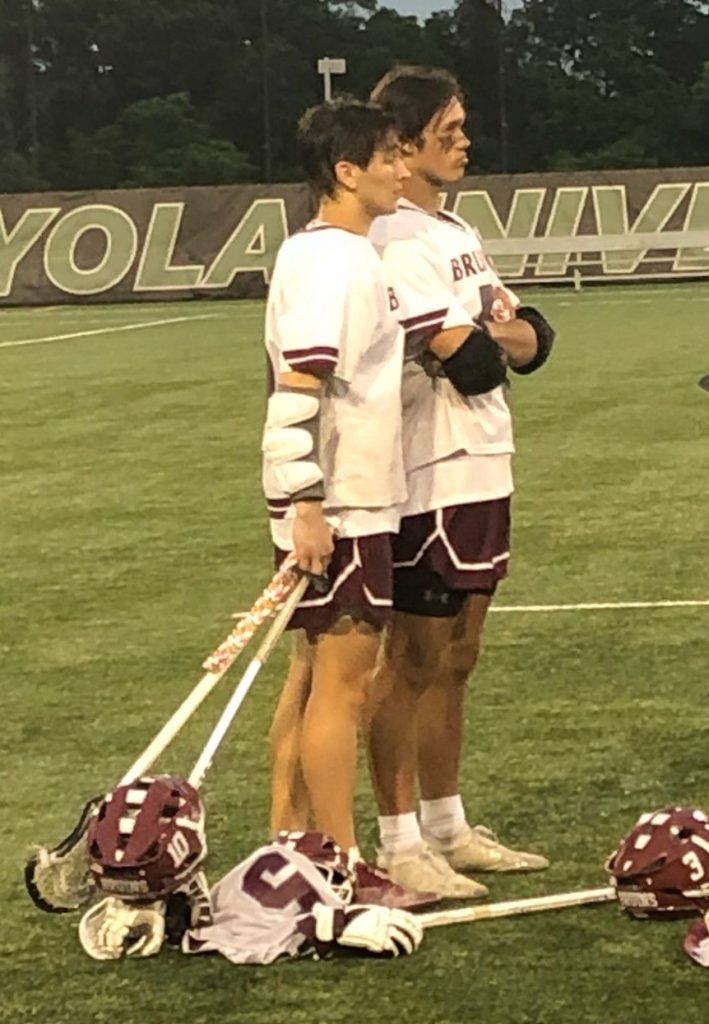 Broadneck lacrosse players Jake Schroll and Eli Harris wait for the start of the awards ceremony following Thursday’s Class 4A state championship. The No. 10 Bruins’ opportunity at a first crown since 1997 was ruined by Montgomery County’s Winston Churchill in a 15-7 decision at Loyola University’s Ridley Athletic Complex.

Instead, the No. 10 Bruins ended up on the wrong side of history. Montgomery County’s Winston Churchill defeated Broadneck, 15-7, to claim the Class 4A state title.

After dominating possession through faceoff control and smothering opposing offenses with a hard-hitting defense in the postseason, the Cape St. Claire school struggled Thursday evening to pry the ball away from Churchill’s faceoff ace specialist Alex Chow and slow a speedy Bulldogs offense.

The wait continues for Broadneck, which last won a title in 1997.

“They’re off-ball cuts were pretty great, well-timed,” Broadneck coach Jeff McGuire said. “They clearly work around one guy, who played a great game. (He was) super composed and struck while the iron was hot. I think we extended out a lot and we weren’t possessing the ball. I think we were a little selfish offensively and in transition. When you’re not possessing, your defense is going to wear down pretty quick. From there, we got caught with backdoor cuts.”

Eliot Dubick was that one guy who caused most of Broadneck’s woes as he produced game-highs of four goals and five assists to give him a mindboggling 72 goals and 93 assists for the season. Those four goals represent the total number of scores allowed by the Bruins combined in their first two state playoff matches.

“It’s crazy,” said Dubick, who will play at the University of Maryland next spring. “We worked so hard for this. The coaches, all of the players before, this is for them. I’m just proud of my guys. The whole team from 1-35, they brought it all tonight.”

Dubick was at the top of his game from the start, producing two goals and an assist to lift the Bulldogs (19-1) to a 4-1 lead after one quarter of play. Churchill captured five of six faceoffs to take control of the match.

“Like I said earlier, (Broadneck’s Graham Hartman is) an excellent opponent,” said Chow, who knew Hartman from attending lacrosse camps. “I went this into any other faceoff except I knew he might have been a tiny bit injured, but I went in stone-cold focused. I tried to get my hand over the ball as fast as I could, tried to rip it out. He was a phenomenal opponent, but I was able to get a few fastbreaks here and there.”

One of the fastbreak opportunities led to a late first half goal by Dubick, who also produced two assists in the second quarter to spark the Bulldogs a 9-3 halftime lead.

Gavin Gumucio chipped in two goals in the second quarter, including one off a saved Dubick shot that Gumucio scooped up and tossed it` in past Bruins goalkeeper Colin Gray (11 saves).

Davis Fisher kept Broadneck in the match with two assists and a goal in the first half, including a nifty one-on-one move with 1:38 left in the second quarter while Jackson Shaw opened the second half with a running left-handed shot to trim the lead to 9-5 but three more goals by the Bulldogs gave them a 12-5 advantage going into the final quarter of play.

Dubick finished the contest with a little flair in the form of a no-look pass to Sam Bunten for a 14-7 lead and then a one-on-one goal with 4:57 remaining.

Case, who matriculated to Loyola University (then Loyola College), died of meningitis shortly before the start of the  1997 high school season. The 1997 run was the last time Broadneck reached the state final four until this spring’s magical journey.

“I mean it’s an honor,“ said Bruins senior defender Nate Levicki. “I’ve had a lot of friends go through this moment in the regional finals. It just feels good (to get this far). I got a lot of texts from neighbors, grandparents, relatives, alumni. It’s just a privilege to be part of such a special team.”

“There’s a lot for this Broadneck team to hang their hat on,” McGuire said. “Even the hardware we got tonight being a state finalist. Honestly, we made a promise to our seniors just to be champions. We were that. We were the in-county champions with an undefeated regular-season record in the conference, and then we were the regional champions, so these guys can … hang their hat on something.

“They brought three pieces of hardware back to Broadneck, so definitely a lot to be proud of with this group, really setting the standard.”