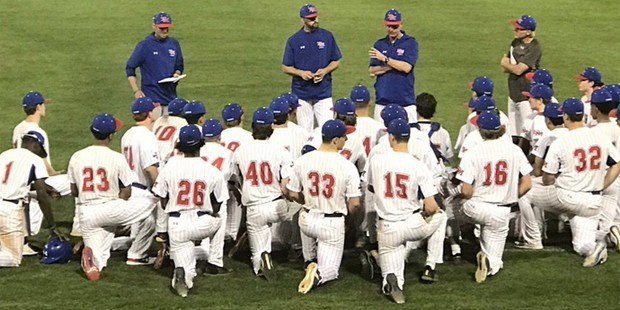 There are a lot of connections between two of the state’s top high school baseball programs – the Stags and Cavs.

In what was a “homecoming of sorts” that he played down, but you know that it was special for Coach Steve Miller and his DeMatha Stags who left Archbishop Spalding in Severn with a 5-3 victory at Domenic Pachence (school’s first coach) Field on Tuesday. It was a battle of premier programs in arguably the state’s top two high school conferences, DeMatha of the Washington Catholic Conference and Spalding of the MIAA A Conference.

Despite a season-opening loss, Spalding first-baseman Josh Moylan impressed the pro scouts on hand to watch him, by going 3-for-3 with two RBI’s.

The season opener for the Cavaliers was played in front of nearly 500 fans strewn along the first and third base lines and 25 of the viewers were pro baseball scouts there to see DeMatha catcher Jack Bulger, who was named the Best Player in Maryland by MaxPreps, and Spalding’s first baseman Josh Moylan. Bulger is committed to Vanderbilt and Moylan to East Carolina, both good baseball schools.

Bulger and Moylan didn’t disappoint the scouts with their performances.

Miller, whose Stags are 5-0 with the first four wins at Dodgertown in Vero Beach (Fla.), coached Spalding for 10 seasons before leaving the Cavaliers (0-1) a decade ago and becoming a professional baseball scout and instructor.

“That was 10 years ago,so it’s water under the bridge,” said Miller, who is DeMatha’s fifth coach in nearly 40 years, replacing Sean O’Connor, who won 225 games in 12 seasons, second only to Charlie Sullivan who won 515 in 24 years. “I’m enjoying what I’m doing right now and never thought I would do it again, but I’m having fun working in a good place with a bunch of good kids.”

Miller’s kids came through for him yesterday after falling behind 2-0 in the first inning of what could have been much worse as the Stag’s starting senior right-hander Alex Greene threw 37 pitches and another 20 in the second inning leaving the bases loaded in each frame. Greene was replaced by junior Kevin Wallace, who settled things down with a 1-2-3 third inning and the Stags rallied for a run in the third and three more crucial tallies in the fourth to take a 4-2 lead.

Bulger, who was 2-for-4 on the day with two hard-hit singles, the second one driving in two runs in the crucial fourth inning, with a Cavalier mis-play scoring the other. Moylan, who was 3-for-3 with an intentional walk that helped Greene get out of the second, also knocked in a pair. The left-hand swinging Moylan singled in a run in the first and Benner Wieman drew a bases loaded walk to give the Cavs’ the 2-0 first frame.

Moylan stroked a two-base hit to right-center to score the Cavs final run in the fourth. The Stags got an insurance tally in the seventh when Greene doubled and Blake Badman followed with a knock to center to make it 5-3 DeMatha. Noah Mrotek worked the first 3.2 innings for Spalding and was charged with all four runs before giving way to Nate Vermillion, who gave up the two-run bingle to Bulger.

Mrotek and Vermillion both threw in the high 80’s for Spalding. Mrotek hit 91 a couple times.

“We knew it was going to be a tough day against an excellent ball club that does everything right,” said the 57-year old Miller, a former AAA infielder and standout for Leone’s legendary amateur team of the late Walter Youse. Miller’s son Sean is a minor leaguer in the Orioles’ farm system.

“I’m proud of the way our guys battled back. We took a punch early and battled back. Alex threw a lot of pitches, but he made the pitches when he had to and got out of those jams.”

On the other side Spalding’s 8th year coach Joe Palumbo, who was a star infielder at DeMatha, knew his guys missed a couple golden opportunities in the first two innings.

“We had them on the ropes, got to their starter but the next guy (Wallace) kept us off balance and gave them three good innings in middle relief (Cavs only one off Wallace in the fourth on the Moylan double) and got the ball to their closer (Bulger),” Palumbo said.

Bulger, who Miller said is “the ultimate competitor,” took off the catcher’s gear and pitched the last two innings holding the home team scoreless to get the save. Bulger only gave up Moylan’s third hit, a shot to right, but was saved when a deep fly to left was caught for the second out in the sixth. Wieman drew his third walk of the contest with one out in the seventh, but Bulger threw two ground ball outs to end it.

“I don’t do that often (catcher to pitcher), but I really wanted to do it today because I almost went to Spalding,” said Bulger, who resides in Bowie and was working out near the first base dugout long after the DeMatha team bus left. “Coach Miller is awesome, a baseball lifer and his staff really knows the game and how to teach it. Couldn’t ask for anything else and this will be a great season.”

As for any pressure on Bulger with the herd of scouts coming to his games, in Florida and at Spalding thus far?

“Not really,” said Bulger, who is a toned 6-foot and 205 pounds. “It’s just an honor to perform in front of all these scouts watching. I played a lot in the summer with these guys watching. It’s a lot of fun.”

Bulger and DeMatha will host Mount St. Joseph on Friday and visit Loyola on Saturday.

Spalding will host Calvert Hall on Monday (March 16) and after his Cavs faltered last spring going down the stretch, Palumbo is excited about this season.

“I think we under performed today (DeMatha), for sure,” said Palumbo who is closing in on 150 career wins and whose team blanked DeMatha, 8-0 last season. “We just didn’t have the at-bats we needed to have and came up a little short. But I think our pitchers looked pretty good and we expect to do well in the MIAA A Conference.

“We have a big test Monday with Calvert Hall.”