Deja vu all over again? 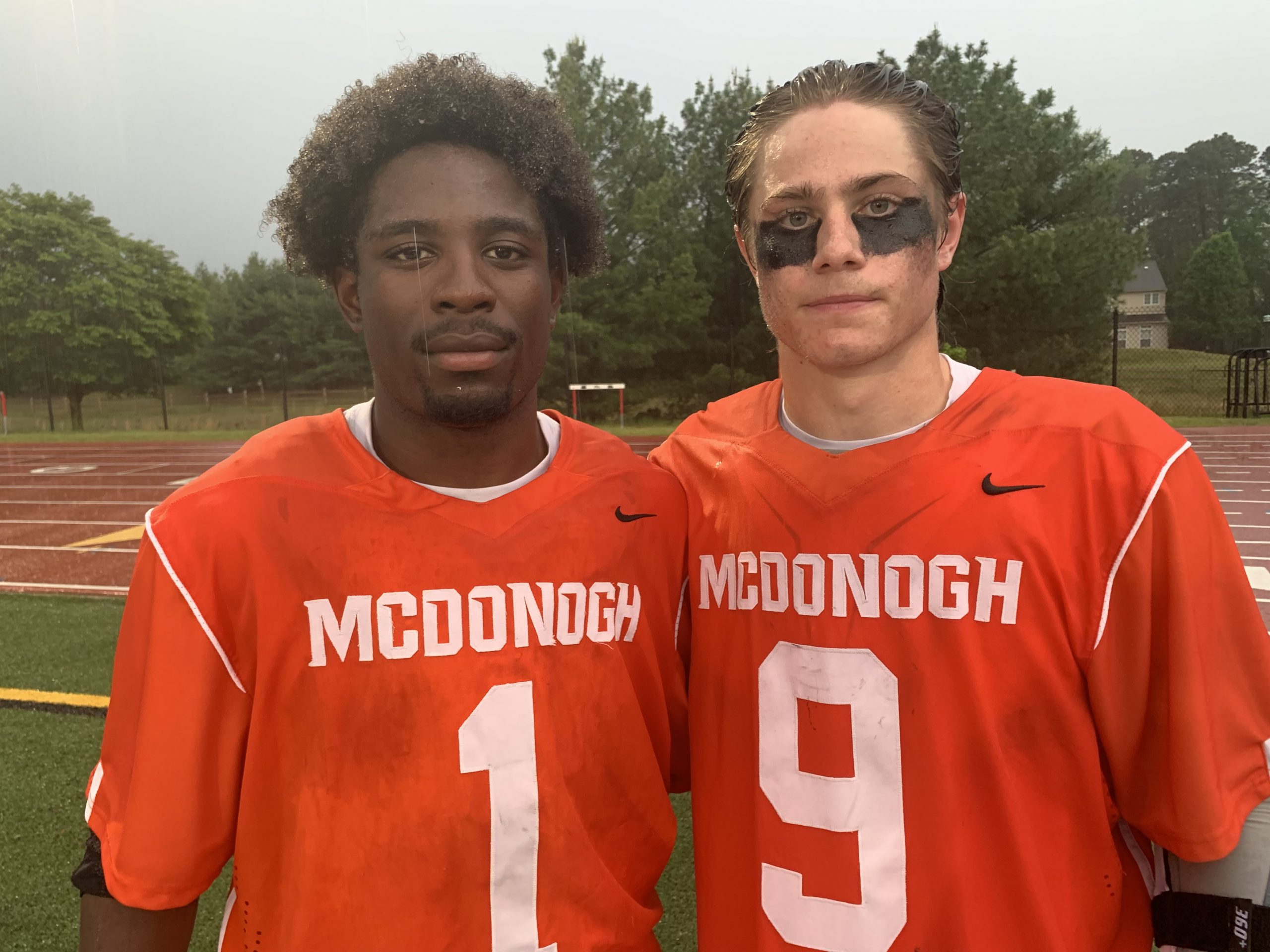 Malachi Jones (left) and McCabe Millon were huge in the fourth quarter for McDonogh School lacrosse Friday. Jones had a couple of checks off the faceoff while Millon had a critical score in the final seconds as the sixth-ranked Eagles defeated No. 4 Archbishop Spalding in a MIAA A Conference quarterfinal match in Severn.

After a less than stellar regular season, No. 6 McDonogh School has a new outlook and  another trip to the MIAA A Conference semifinals after a 12-10 opening round decision over the third-ranked Cavaliers at Whittles Field in Severn.

McDonogh, the No. 5 seed, will return to Anne Arundel County, Tuesday afternoon at Navy-Marine Corps Memorial Stadium in Annapolis, for a MIAA A final four matchup with top-seed and defending champ Boys’ Latin School. Top-ranked Calvert Hall College and No. 4 St. Mary’s will meet in the other semifinal in the state capital.

As rain started to pour moments after Friday’s conclusion, McDonogh coach Andy Hilgartner commended his squad for weathering the Cavaliers.

“I thought we played great, as good as we have all year at times…we had poor decision making too and credit to Spalding for getting back in the game,” said Hilgartner. “We’re excited to get to play again and be around the guys.”

“So many unbelievable guys, we’re such a close team,” said Millon. “Never a doubt in our minds and we were able to pull it out, and looking forward to Tuesday.”

The Eagles led 9-4 midway through the fourth before Spalding, thanks to a pair of extra-man scores, closed to 10-9 with 1 minute, 49 seconds left in regulation.

Jones, handling faceoff in the closing moments for defensive purposes, was bested by Cavaliers faceoff specialist Blake Malamphy. The University of Virginia recruit quickly recovered, knocking the ball out of Malamphy’s stick and scooping up the ball.

Millon, the nation’s top player in the Class of 2023, according to Inside Lacrosse, put a double-move on a Cavalier defender behind the net and came to the front. He ripped a shot into the upper corner with 26.8 left in regulation for a two-goal advantage.

Malamphy got the ensuing faceoff and Coffman completed his hat trick, putting Spalding back within a goal with 16.7 seconds left. The Cavalier faceoff ace came out with the ball after the whistle, but Jones quickly knocked it out.

Jones got the groundball and flipped the ball to Millon, who gave it up to younger brother, freshman Brendan, for the clinching score.

The older Millon started McDonogh’s effort Friday with two scores inside 10 seconds in the opening period. Spalding got even at 2 midway through the quarter, but a four-goal run, including a score and assist from McCabe Millon, gave the Eagles a four-goal advantage in the second.

“He’s a special player for sure, but I think what he’s done the past couple of weeks is getting the ball out the stick and allowing other guys to be involved in the play,” said Hilgartner. “When he does that, it makes his abilities and his dodging opportunities so much greater.”

Spalding drew to 6-4 early in the third before McDonogh answered with tallies from Ben Firlie, Luke Miller and McMillen for a 9-4 cushion entering the fourth quarter.

The Cavaliers, whose top player, Michael Weisshaar, was shutout through 36 minutes, came to life in the fourth. The reigning C. Markland Kelly Award winner and Towson recruit got his first goal with 6:24 left in regulation.

Coffman made it 10-7 with 3:07 remaining. An unsportsmanlike penalty on McDonogh gave the Cavaliers an extra-man opportunity and Weisshaar capitalized with 2:12 left, followed by Schrier about 13 seconds later.

The Severn school wasn’t able to complete the comeback and return to Navy stadium. The Cavaliers lost to the Eagles, 9-7, during the regular season.

“They’re four of the best defensemen in the country, we have some of the best offensive guys in the country,” said Phipps. “We tried some different things and started getting some action in the fourth quarter, but credit to them.”

Spalding had its finest season in 2021, reaching its first MIAA A championship match.

The Cavaliers, with 15 seniors, showed this spring it wasn’t a fluke.

“We didn’t mention this game once, we talked to our guys afterwards about what they’ve done and what they’ve brought to Spalding,” said Phipps.

At a crossroads after being handled at home by St. Paul’s School for a third loss in four league decisions, McDonogh has reversed course with three straight victories.

“We knew as a group we’re a lot better and it was a group decision…for the seniors it’s going to be their last ride,” said McCabe Millon, who’s committed to Duke. “We didn’t want to go out on a sour note, we got after each other in practice and been able to turn it around.”

McDonogh was the preseason No. 1, then fell to Boys’ Latin (8-6) in the MIAA A opener in late March. Last spring, the Eagles were the top-seed and attempting for a perfect season when the Lakers, as the fifth-seed, won 13-12, in the semifinals at Navy.

“Coming off a season where we went 10-0, this season was very different,” said Hilgartner. “Credit to our guys, their leadership has been awesome.”