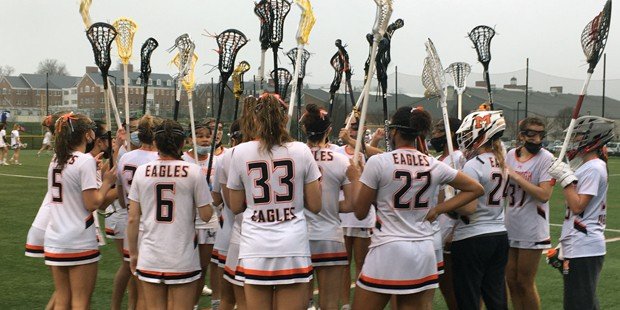 For well over a decade, the McDonogh School girls lacrosse team has found a variety of ways to continue to parlay its mastery of the sport into a dynasty.

The Eagles have proven, time and time again, that whenever one facet of their game struggles, another unit steps into the breach to save the day.

In rainy Owings Mills on Wednesday afternoon, with McDonogh’s offense being stymied a bit by the sloppy conditions and an inspired Bryn Mawr School backline, the Eagles’ defense made its presence felt by holding the Mawrtians to one goal over the final nine minutes and 23 seconds to secure a 10-6 victory in tussle between unbeaten IAAM A Conference foes.

Considering that Bryn Mawr had scored an average of 13.5 goals per game in a 4-0 start to the season, McDonogh’s ‘D’ more than held its own. 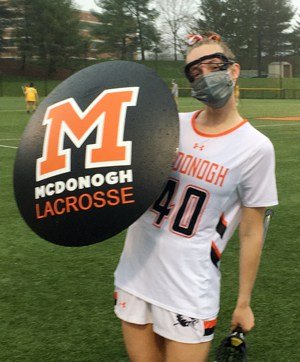 First and foremost, senior Devyn Greenfield was singled out by McDonogh coach Taylor Cummings for her effort against Bryn Mawr standout midfielder Adair Martin, a North Carolina recruit who was held to a single goal.

Cummings added that junior defender Sydney Smith, who was also critical to the Eagles’ clearing game, was a key member of the unit playing in front of junior goalie Marin Wilhelm (14 saves).

All in all, despite nursing a 6-5 lead late in the final period, McDonogh avoided its first loss to an IAAM rival during the regular season for the first time since April 2, 2008 when John Carroll School took down the Eagles, 14-9.

On Wednesday, when the offense started to click, the defending A Conference champs poured in four goals over the final eight minutes to improve to 5-0.

McDonogh is one of three unbeaten teams left in the A Conference, although it has won two more games than either Notre Dame Prep (3-0) or St. Paul’s School for Girls (3-0).

Greenfield admitted that the Mawrtians had her team on its heels at times during the contest.

The first time was after McDonogh bolted to a 4-0 lead midway through the opening period on two goals by senior midfielder Kemper Robinson and one each by sophomore attacker Makena London and junior midfielder Kory Edmondson before Bryn Mawr bounced back with a pair of tallies by Reese Woodworth and one by fellow sophomore midfielder Merrill Watson to cut the lead to 4-3 at the half.

With just over 18 minutes to go, McDonogh senior attacker Caroline Godine netted her only goal of the game to up the score to 6-4.

Bryn Mawr senior attacker Charlotte Smith then answered to draw the Mawrtians back to within a goal at 6-5.

Then Edmondson, who had been turned away twice from the 8-meter arc by Bryn Mawr stellar sophomore goalie JJ Suriano, buried back-to-back free position shots before London’s second goal and the first by sophomore midfielder Hannah Shiels broke the game open just over five minutes left.

“She took an extra second to read the goalie,” she said.

Bryn Mawr senior attacker Charlotte Smith’s free position goal was the Mawrtians’ last gasp in a game that was very competitive until the Eagles pulled away at the end.

Greenfield said that the Eagles settled down after the Mawrtians 3-0 run in the first half.

“Coach called a time out and we regrouped and bounced back,” she said.

She also credited Wihelm for her ability to make stops and her for her poise outside the goal circle.

“Marin’s a beast,” she said. “Her clears were great today. She really does her job well.”

“Marin is really able to step up in the moment and see the ball well,” she said. “And she did well clearing the ball well against a good riding team.”

“They send quick slides and have great ball pressure,” she added.