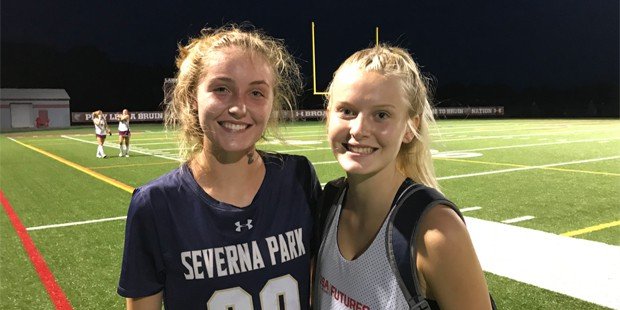 Falcons get a shutout victory over No. 5 Broadneck

Severna Park field hockey coach Shannon Garden said even before the season started that she was impressed with her defense and the No. 1 Falcons have certainly lived up to her expectations — and maybe more.

“They work together really well,” Garden said. “They communicate well, they can anticipate each other’s moves well and they have confidence in each other which is so huge and Zoe Day is the anchor of that.”

Day, a senior center back committed to Lehigh, stopped the host Bruins drives time after time and thwarted their attack with great passes to the midfield that sparked the Falcons offense.

“Zoe has really good vision and (ability in) reading the play,” Broadneck coach Shannon Hanratty said. “As much pressure as we put on her, she does a really good job reading where her opening is. We got a few that almost went, but she’s a very poised defender that makes it hard to get past.”

The No. 5 Bruins (4-1, 2-1 County) went into the clash of unbeaten teams averaging 3.25 goals through their first four games and they had outscored their last two opponents, No. 14 South River and No. 16 Arundel, 8-2.

But the Falcons (4-0, 3-0) had allowed just one goal to each of their first three opponents, including in a season-opening 2-1 double-overtime win over then-No. 1 Garrison Forest.

Tuesday night, Severna Park’s attack took a little pressure off the defense with two goals in the first half.

Ava Drexler-Amey nailed a reverse chip into the cage from the top of the circle with 7:09 left in the first quarter. Sydney Rowe made it 2-0 with 6:30 to go in the first half when she deflected the ball, after a crossing pass from Drexler-Amey on the left, just past lunging Bruins goalie Chloe Rand.

The defense took it from there.

“I think the key to the defense was staying patient and staying calm in the backfield,” said Day. “My right and left backs, we work on marking a lot in practice and I think we did that really well in this game especially during fast breaks… Honestly, trust in the backfield too. I trust Charley (Kramer) more than anything. I have complete faith that she’ll save every ball along with my other two defenders.”

Kramer, a Boston-College bound senior who finished with six saves, said the Falcons are excited to be undefeated but not too excited.

“It definitely builds up our confidence as a team,” she said, “but we definitely know we have things to work on and a long way to go. We’re really excited to play the rest of the games and see how the season goes.”

The Bruins had a lot more scoring chances in the second half, including two fast breaks late in the second half where they rushed their shots and fired wide. They only managed to put three shots on goal in the half and Kramer saved two of them while the other was blocked.

“We took almost every kind of shot we could take,” Hanratty said, “and they’ve got Zoe and Charlotte Kramer’s a really good goalie, so they were forcing us to take maybe not our best shot or our best opportunity, but I’m really proud of the effort that our forwards put in because they didn’t give up. Going down 1-0, going down 2-0, it can be easy to think, ‘That’s it,’ but our girls really never stopped and they turned it on even more so in the second half and they had plenty of opportunities but we just couldn’t finish them.”

The Bruins also looked strong on defense much of the game with backs Safiya Stimely, Emily Ernst and Zoe Bjelac as well as first-year goalie Rand, who finished with five saves. Chloe Page and Mady Quigley also did a lot of work in the defensive midfielder.

They will try to bounce back when they travel to meet No. 3 Archbishop Spalding Thursday at 4 p.m. The Falcons next play South River at home on Tuesday.

The Bruins and the Falcons will meet again on Oct. 12 at Severna Park.

Pictured above: Severna Park center back Zoe Day and goalie Charlotte Kramer led the No. 1 Falcons to a 2-0 victory over No. 5 Broadneck Tuesday night. The Falcons have allowed just three goals through their first four games.