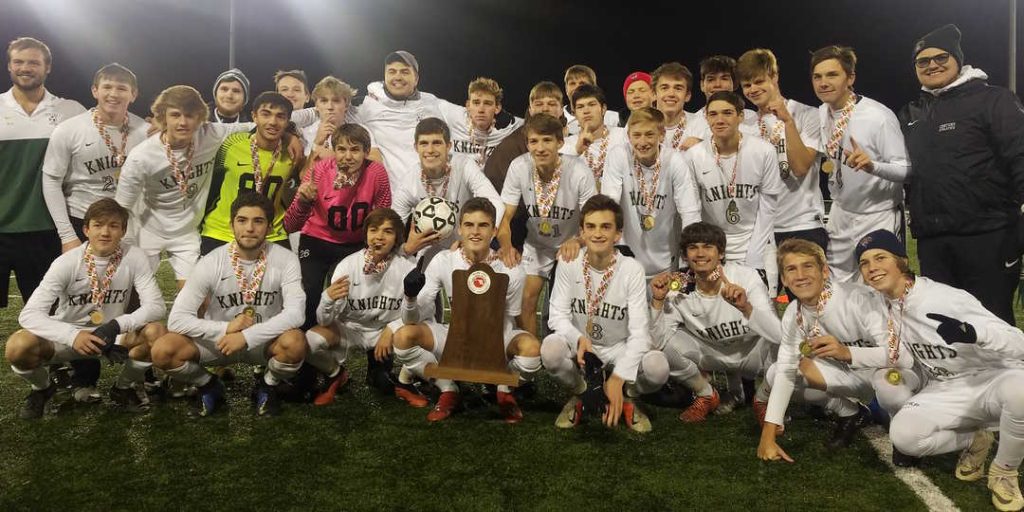 There was lot of nerves for Century High’s boys soccer Thursday night for the Class 2A state championship at Loyola University’s Ridley Athletic Complex. Looking around and trying to take in every moment was a little overwhelming at times.

But thanks to Alex Grasso, the Knights were able to settle down.

“Before the game started I could definitely tell in the locker room that the whole team was nervous. When we went out to the field we were just quiet and weren’t happy like usually are.” said Grasso. “When I scored we just picked up our momentum from there, a spark just went off in our heads and we went off.”

Grasso netted the game’s lone tally in the first half, and coupled with strong midfield play and timely saves from Ethan Ricketts, Century held off Southern Maryland’s LaPlata, 1-0, for the state title.

Starting the season with 13 players, the Knights (15-4 overall) completed their magical ride with the program’s first state championship since 2003.

“We had high expectations to start the season, but never in our wildest dreams that we would be talking wining a state championship,” said first-year Century coach Trey Howes. “I don’t think it has set in yet, but it is very exciting, good for our program, good for our fans and more than what I expected in my first year.”

The first Century goal nearly came 10 minutes into the contest when Jackson Glenn had a clear shot at the goal but his shot went wide right. With the ball still in the nearly the La Plata goal the Warriors attempted to but committed a hand ball foul a few yards outside the box. As a result, a free kick was granted to the Knights.

Grasso stepped and looped the ball into left corner of the net with 29 minutes left in the first half.

“In the last three games I have been coming really close to scoring, “said Grasso. “When the ball went my foot I just like it was going in, it went in and everyone was celebrating.”

“It was crazy, I couldn’t even keep up with him [Grasso] after he hit it and was celebrating. It was great and it really did us momentum and carried us the rest of the game,” Glenn added.

Shots on goal were hard to come by for both squads and the midfielders for Century and La Plata dug in. The best chance for the Warriors to get the equalizer in the first half came when Cole Trani had a shot with 13 minutes, but his shot sailed wide right and the game remained tied at halftime.

“Even when the ball did through our outside backs covered the ball very well and were able to play defense as a team as we should, collected the ball and when our own attacks,” said Joe Bergamaschi.

Ricketts (five saves) halted a La Plata (14-5-1) shot from nine yards out seven minutes into the second half, and punted the ball past midfield where Connor Grow as able to secure the pass. Grow and able to work his down to a few yards away from the left post but his shot went high and over the crossbar and Century was able to pad its lead.

“One of the things we said at halftime was ‘No Mercy’ we did not want to take our foot of the petal,” said Howes. “Our gamelplan coming out of halftime was that game is 0-0 and to play for the next goal.”

La Plata’s last and best chance to tie game came via a Diallo Barnes’ boot with under 15 minutes in the contest, but Ricketts once again ended the scoring chance for the Knights.

“To win a state championship game like this I believe that you need a special moment,” said La Plata coach Chris Butler who team was looking to win their first championship in school history. “They had their special moment and we just weren’t able to create one.”

The final minutes the Knights keep the ball away for the Warriors until the final horn and sent Century faithful into a frenzy. Even after clinching the title Howes acknowledged that it will take some time for the championship run to sink in.

“It will probably sink in next year when we see the banner in the gym, we said we wanted to dust off the old banner and put a new one,” said Howes. “It will be constant reminder to us and our fans and freshmen players that [championship] is the expectation.”