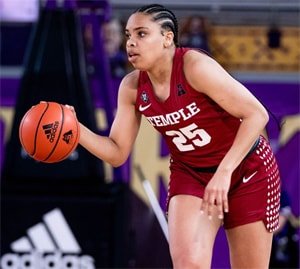 Davis led the Owls in scoring, averaging 17.7 points per game, which was second best in the All-American Athletic Conference (AAAC). She also had a team best 7.6 rebounds per game. She finished her college career as Temple’s all-time leader in made free throws with 412. She is third all-time in made field goals (685) and rebounds (961), while ranking fourth in career points with 1,849. Other awards included being named a Top 10 Finalist for the Cheryl Miller Award and being selected .