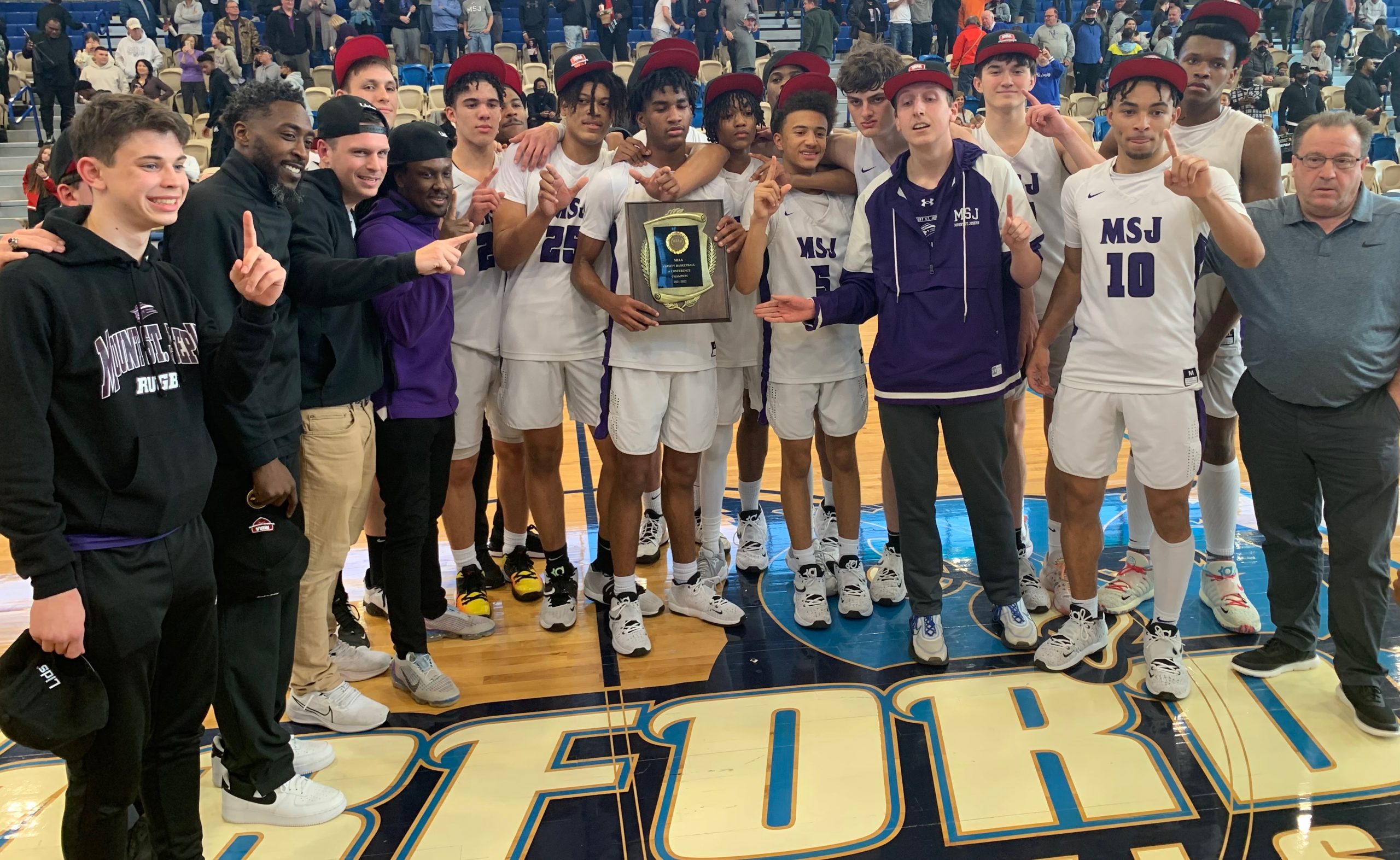 With more than 700 victories, Pat Clatchey is one of the best coaches in Baltimore high school basketball history, if not the best.

As a dancer, let’s say he shouldn’t consider changing careers. After Mount St. Joseph High victory Sunday in the MIAA A Conference championship, there was “The Wizard of Irvington,” busting a move during postgame celebrating.

The fourth-ranked Gaels defeated No. 3 Our Lady of Mount Carmel, 63-60, at APGFCU Arena at Harford Community College. Bryson Tucker and junior guard Ace Valentine each finished with 20 points for Mount St. Joseph (27-5 overall).

In the first title game in the area’s toughest league since 2020, the Gaels and Cougars put together one of the best 32-minute dramas in A final history.

“We just made enough plays,” said Clatchey, whose team defeated St. Frances Academy in the prior MIAA A title match in 2020 (no 2020-21 MIAA A season due to COVID-19 pandemic)

It was a collective effort Sunday by the Baltimore City school which captured its record seventh league championship.

The Gaels, who trailed by seven points at the start of the second quarter, had a seven-point advantage late in the third (39-32). Mount St. Joseph methodically managed the lead with key baskets.

After Mount Carmel pulled to within, 52-51, and missed front end of an one-and-one, Valentine buried a 3-pointer from the corner, extending the Gaels’ lead to 55-51. Tucker hit a nifty turnaround jumper after the Cougars drew to 55-54.

Mount Carmel, looking for its first MIAA A title, kept coming. Andrew Dixon, who beat Valentine to an outlet pass, put the ball behind his back and went in for the score, gave Cougars a 60-59 lead with 50 seconds left in regulation.

Abrams got the ball to Hansberry (15 points), who backed his defender into the paint and dropped the ball in the basket, regaining the lead for the Gaels with 25.9 seconds to play. Hansberry grabbed Deon Perry’s miss and fired the ball downcourt to Valentine for a layup.

Valentine, whose steady progression has mirrored the Gaels’ evolution this winter, said his teammates were ready to finish job No. 1 Sunday.

“We worked all season for this. We’ve been building all through the season,” said Valentine. “We knew what the goal was, winning the championship.”

Perry finished with a game-high 25 points for Mount Carmel (25-7), and Dixon, a sophomore guard, added 12. The Cougars, who split with Mount St. Joseph (home team won) during the regular season, started promising in the rubber match Sunday.

Perry put the Cougars up, 15-8, after a 3-pointer. The Loyola University recruit found Allen Mordi inside for a basket before the buzzer, leaving the Essex school with a 19-12 advantage.

The second quarter belonged to St. Joe as Tucker, a member of the U.S. National 16-under squad who has already received verbal offers from Maryland, George Mason, Georgetown, Illinois, Indiana, LSU, Notre Dame and Virginia Tech, hit a 3-pointer to pull even the Gaels even at 21. They led 28-21 after Valentine capped a 16-2 surge with a dagger from the arc.

Mount Carmel closed the gap to 31-26 at halftime, and stayed within two possessions through the third into the fourth quarter. After being flustered by several Mount St. Joseph second chance opportunities, the Cougars found themselves in the lead with 50 seconds left in regulation.

After Hansberry’s lead score, Perry couldn’t get his off-balance attempt to hit the glass with about eight seconds left. The Cougars got one final chance with 3.4 seconds remaining after calling timeout following Valentine’s basket.

Dixon tried to inbound the ball to Perry, but Abrams stepped in front, right at the Gaels’ bench.

“We just didn’t make the last plays,” said Mount Carmel coach Trevor Quinn. “There’s nothing to be ashamed of. It’s a championship game, got to remember how this feels going forward. The BCL’s next week…there’s still an opportunity for us.”

The 51st Baltimore Catholic League Tournament starts Wednesday, with Mount Carmel hosting No. 6 Archbishop Spalding in a quarterfinal with No. 8 Loyola Blakefield, which nearly pulled off an epic comeback against Mount Carmel in last Wednesday’s MIAA A quarterfinals, travels to Mount St. Joseph.

The Gaels have some unfinished business after losing to eventual champ John Carroll School in the opening round last year. It was Mount St. Joseph’s earliest BCL tourney exit in more than 20 years.

Clatchey, who collected his 750th win at his alma-mater, is excited about his team’s growth this season after playing a truncated schedule last year.

“Anytime you can hang a banner, it’s a great feeling,” said Clatchey.

Great enough to dance “The Gritty.”

“I actually practiced that,” laughed Clatchey. “Don’t ask me to do it now.”