No. 2 Archbishop Spalding remains unbeaten after shutting down McDonogh in low-scoring MIAA A Conference gridiron battle

Despite the efforts of McDonogh defenders Niles Riding (left) and Luke Miller (24), Spalding quarterback Nick Guiterrez dives over the goalline for a touchdown during Friday’s MIAA A Conference football battle. Guiterrez accounted for both touchdowns in a defensive struggle, won by the No. 2 Cavaliers at John McDonogh Stadium in Owings Mills. (photo – Laurie Butts)

Both defenses showed up to play big-boy football Friday night when Archbishop Spalding put its seven-game winning streak on the line against McDonogh School.

The No. 2 Cavaliers and fifth-ranked Eagles staged an old-school slugfest at John McDonogh Stadium, making a possible rematch in the first round of the MIAA A Conference playoffs next month an intriguing prospect.

“They’re really good defensively,” Spalding coach Kyle Schmitt said about McDonogh. “We felt like their D-line could match up well with our O-line. They have a lot of good dudes up front.”

Archbishop Spalding senior outside linebacker Kellan Wyatt was part of a smothering defensive unit that helped the Cavaliers improve to 8-0 Friday. The 6-foot-2 Maryland commit and his defensive mates have allowed just nine points per game this season.

Considering that the Eagles were held to a paltry 19 total yards in the first half and were shutout for the final 56 minutes of the contest, it’s fair to say that the Cavaliers’ front seven and defensive backs were also very stout.

The game started with a defensive gem by McDonogh junior defensive back Demitrius Smith, who picked off Spalding senior quarterback Nick Gutierrez on the second play from scrimmage at the Cavaliers’ 20-yard line.

Senior running back Stefan Egbe carried the ball to the Spalding 7-yard line before the defense, aided by senior Jalen Robertson’s sack, forced McDonogh senior Sam Asplen to attempt — and convert — a 22-yard field goal for a 3-0 lead with 8:40 remaining in the opening period.

Spalding senior outside linebacker Kellan Wyatt called that sequence a “game changer,” alluding to the momentum the Eagles would have had if they scored a touchdown at that point.

Although junior Mason Robinson had a pair of sacks on the Cavaliers’ ensuing drive, they weren’t enough to stop Gutierrez from running six times — including a 6-yard streak into the end zone — in a 16-play, 65-yard attack that put Spalding ahead, 7-3, after senior Cory Butts’ conversion kick with 2:17 left in the quarter.

The game’s final score came on an 89-yard drive, featuring some chunk plays through the air from Gutierrez to seniors Teagan Brown and Patrick Wagner.

An 18-yard jaunt by senior running back Jordan Harris set up a 7-yard Gutierrez TD run with 2:48 left in the third quarter to give the visitors a 14-3 advantage.

McDonogh’s best chance to get back in the game came late in the final period when Robinson blocked a punt that sophomore Luke Miller scooped up and streaked into the end zone.

However, a personal foul on the play negated the TD and the Eagles were stymied once again.

“Those were two of the best defenses in the area,” Schmitt said after his team improved to 8-0 overall and 3-0 in conference play. “Not all games are going to be easy. We can’t just roll our helmets out there and expect to win. Our defense gave an incredible effort. We needed a game like this.”

“We just wanted to stop them from getting explosive plays,” Wyatt added.

McDonogh coach Hakeem Sule said his defense reacted well to the challenge provided by the usually prolific Cavs’ offense and its leader, Gutierrez.

“We put an extra man in the box,” Sule said. “With a guy like him, you just try to contain him as much as possible.”

Sule said that McDonogh, with victories over A Conference opponents St. Vincent Pallotti next week and arch-rival Gilman School on Nov. 6, could still make the playoffs.

The Cavs will face Gilman next week and Mount St. Joseph on Nov. 5. 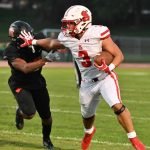 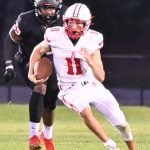 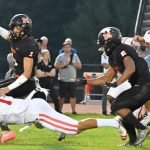