Cut from a Baltimore icon 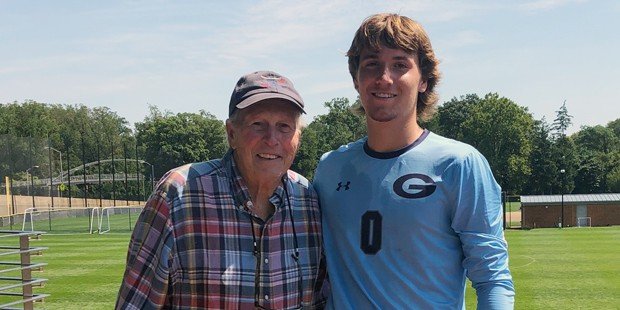 Gilman junior goalkeeper Grant Farley, the grandson of Baltimore Orioles’ legend Brooks Robinson, is gaining attention for his own brand of incredible stops

Being the grandson of Baltimore Orioles’ legend Brooks Robinson, widely considered to be the greatest fielding third baseman of all time, has its advantages for Grant Farley.

The Hall of Fame third-sacker cannot give any cogent pointers to his grandson on goalkeeping when the junior from Reisterstown is between the pipes for Gilman’s fourth-ranked soccer team, but making incredible stops is a trademark they have come to share.

Farley’s granddad was most notably a baseball prodigy, who grew up in an era when soccer had yet to catch on as a viable athletic pursuit in his native Arkansas. Farley, on the other hand, had options.

And baseball was one of them until he figured out, ironically, that his glove work was lacking.

“I used to play third-base, too,” Farley said. “I could hit pretty well, but it was the fielding… (that was a problem). But then I found soccer when I was 13.”

Farley said that his his parents, Wayne and Diana Farley, always stressed that he should choose a sport that made him happy.

“I think that’s the reason I’ve tried many sports, like football, lacrosse and baseball,” he said. “But playing soccer goalie has been something totally different. It’s probably the happiest you’ll see me — when I’m between the pipes.”

Once he settled on playing in the goal, Farley discovered that the position was pretty well suited for his lanky frame and good athleticism. 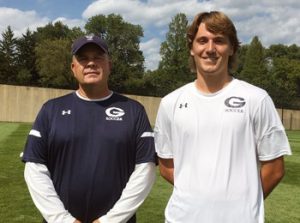 Gilman coach Jon Seal (left) and junior keeper Grant Farley are preparing for another winning season for the Greyhounds in the highly competitive MIAA A Conference.

Now, at a strapping 6-foo-3 and 195 pounds, Farley is putting to good use the same kind of lateral quickness his famous grandfather displayed on the diamond.

“Grant has only been playing goalie for five years,” said Gilman coach Jon Seal. “He’s still developing and growing into the position. He aspires to get better and he will get better and better the more he plays.”

Farley is now entering his third year as a starting keeper for the Greyhounds, who are known for having a stingy and well-organized defense that can frustrate more prolific rivals.

In order to continue the success that carried the Greyhounds (14-6-2) to an MIAA A Conference semifinal berth last fall, Farley will have to take even more control of the situation while playing behind the stout backline of senior captain Eli Webb, junior Owen Grimm, sophomore Alden Booth and freshman Chase Spurrier.

His progression as a reliable shot-blocker has been strong and steady.

“I feel more confident every year,” he said.

Naturally, as a freshman, Farley deferred to his elder teammates while simultaneously earning respect for his ability to guard the goal.

“At first, Grant was a little reluctant to be vocal back there,” Seal said. “But he’s really developing into a leader now — and he’s done it since (practice began) Aug. 12. He’s been the first one to arrive and the last one to leave. We’ve told him he has to be more vocal, and he’s taken the challenge to heart.”

Farley really began to shine last year when he averaged five saves per outing and posted nine shutouts while playing primarily in the ultra-competitive A Conference where close outcomes are almost guaranteed.

His best showing may have come in a tough battle against Archbishop Curley when he made 11 saves to help the Greyhounds salvage a late-season 1-1 tie.

“I remember that game well and feel like I played pretty good,” Farley said. “(It was) a hard-fought contest and one of my favorite games of my Gilman career.”

To open the 2019 campaign, he made seven saves in a scoreless tie against Severn.

He followed that up on Saturday with a four-save performance in a 3-0 triumph over Haverford School (Pa.), the nation’s 28th-ranked high school team, according to Top Drawer Soccer’s Fab 50.

While the Severn match did not go to penalty kicks, Farley might very well have wished that it would have.

“When the whistle blows, it flips a switch, and I try to read which way the guy is going to shoot,” he said. “I love Pk’s.”

Those kind of challenges are what makes Farley such a weapon for the Greyhounds.

And despite being justifiably proud of his grandfather’s accomplishments, wearing his iconic jersey No. 5 has not been in the cards for Farley — yet.

“I haven’t really gotten the chance to wear the number for either academy or high school ball,” Farley said. “But once I get to the collegiate level, it’s definitely something I’ll have to think about.”

Pictured above: Baltimore Orioles legend Brooks Robinson and his grandson Grant Farley are all smiles on Saturday in Roland Park after the junior Gilman goalie posted his second shutout to open the season for the Greyhounds. Farley had four saves in a 3-0 triumph over Haverford, which was ranked 28th in the nation in the Top Drawer Soccer Fab 50 coming into the match.

Gilman junior goalkeeper Grant Farley, the grandson of Baltimore Orioles’ legend Brooks Robinson, is gaining attention for his own brand of incredible stops