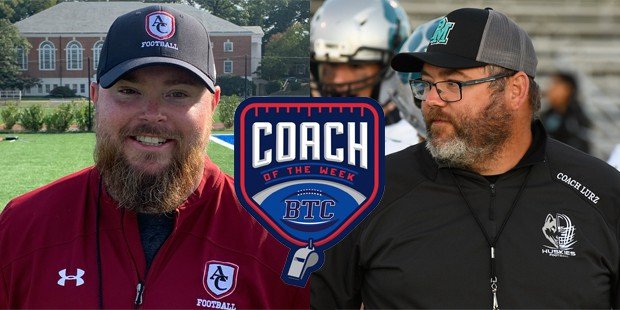 Friars are 4-0 after a win over Gilman; Huskies are off to a 3-0 start

The Week 4 Baltimore Touchdown Coach of the Week honors are shared by Archbishop Curley’s Brendon Ireton and Patterson Mill’s Steve Lurz, a pair of coaches who have their football teams off to undefeated starts in 2019. 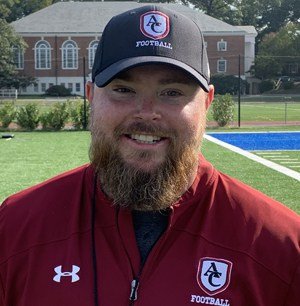 Ireton is in his second year as the Curley head coach after a six-year run as the head coach at Kent County High School on the Eastern Shore. Prior to getting his first head coaching appointment, Ireton also spent four years as an assistant at Curley under long-time head coach Sean Murphy and one year under his father, Sean, at John Carroll, which is Ireton’s alma mater.

According to Ireton, the 4-0 start by his team this season is the result of everyone pulling in the same direction.

“It has been a total team effort by the program,” said Ireton. “The players have bought into what our coaches are teaching, they started seeing the change towards the end of last season and kept it going into the offseason. The kids worked hard in the offseason and started coming together as a team.”

Ireton made a bid to replace Murphy when he stepped down following the 2016 season, but Sean Sandora, who was at Dundalk at the time, was selected. Sandora abruptly left Curley, however, following the 2017 season and the transition led to couple of tough seasons for the Friars.

“It’s tough to deal with change and our guys have definitely felt it, but they’ve handled it and responded well,” said Ireton. “Lastly, our coaches have done a good job teaching within our philosophy. It took some time to get it rolling but you could see spurts of good play last season and I think our coaching staff has done a great job working in the off-season to adjust and perfect what we were doing.”

Ireton explained why he wanted to lead the Friars when the opportunity came around for a second time.

“I knew if I got the Job at Curley, I would be able to bring back the coaching staff that I worked with previously and that was appealing to me,” he said. “The kids I had the opportunity to work with during my first stint were great. I still keep in contact with many of them. I knew this opportunity would be similar and didn’t want to pass on it.”

Following his graduation from John Carroll, Ireton went on to play at King’s College. He began his college career as a safety early but eventually transitioned to a linebacker.

“Between playing and coaching, I have had the privilege to be around some very good coaches who have impacted myself as a coach and as a mentor,” Ireton added.

According to the coach, Curley’s victory over Gilman was a key building block for his program.

“Gilman is going through a rebuild, but they still have a number of talented players and coaches who are working hard to install their vision,” said Ireton. “Very similar to what we started with last year and what we are still trying to do. The win is part of our growth as a program, but we still need to understand there are many games left and anything can happen.”

Being named a BTC Coach of the Week is one more indication of the program’s growth.

“It’s a honor and humbling to be recognized, but like I said earlier, this process has been a team effort and wouldn’t be possible without the work of everyone involved in the program (players and coaches).

“Rich Stichel and Jeff Farace work with the offense. Frank Emardino, Phil D’Adamo, Joe Casparriello and Nick Farmer work with our defense. Both sides have committed to our philosophy and have done a great job teaching and coaching our players. It is tough to find loyal and dedicated coaches as good as the ones we have and it’s exciting to see the development of the program.”

“The BTC is a great organization that has been around for a long time. Scott Ripley does a great job running the organization, and everyone involved does a tremendous job promoting the players in our area. I can remember as a player, the organization was just taking off and it was cool experience to be a part of as a player and now as a coach.”

Lurz, who played his high school football at Overlea, under Terry Ward and the tutelage of his line coach Elmer Diez, before playing one season as a walk-on at Towson University, is now in his 11th year as a head coach and his sixth at Patterson Mill. His first five years were at Owings Mills High School.

His Huskies are 3-0, including a 41-21 win last Friday over Rising Sun, and are averaging better than 33 points per game thus far.

“The biggest key offensively to the great start is a big improvement in our run game,” said Lurz. “Last we struggled and as a team only had 879 yards on the ground. This year we are averaging around 200 (per game). We are also a senior heavy group with five guys that have started on offense since they were sophomores, including our quarterback.

“Defensively we have really settled down in our second year with my defensive coordinator. The guys have bought in to what we are doing and they are also creating take-aways. We have 12 already on the year. Overall, it is really the kids who have put in the work to improve and they are playing for each other and having fun doing it.”

Lurz was appreciative of being honored by the BTC.

“It’s great,’ Lurz said. “The BTC has a lot of great coaches that are a part of it. The organization is more like a fraternity where you can bounce off ideas or learn. As a team last year we really struggled and finished 0-9, just for the team to get the recognition is great. The guys have really put in work to improve and for that to get noticed, especially by an organization like the BTC, the guys feed off of that some. For me personally its just nice to see that improvement, because it did take some faith from the staff and players that we are doing some things right.”

Lurz only has two assistant coaches on staff this year, but credits both with his team’s success in 2019.

“Kyle Benfield is our offensive coordinator/quarterback and secondary coach. He does a great job every week of setting up the offensive game plan and getting the unit to understand what we are trying to do and how to do it. He has a great repour with the guys and especially the quarterback, Nathan Vujanic, who he has had for three years. The group has really started to believe in themselves.

James Knight is our defensive coordinator/linebacker and wide receivers coach. He has brought in a more disciplined philosophy of playing defense, we can really see in year two how the guys have bought in and have a great base understanding of what do and how to adjust. Last year he worked with the defensive line but has switched to the linebackers this year, which is probably the group we are seeing the biggest change in play in. The defense has a fun personality and they do a great job of swarming together and creating takeaways. We are a small group this year, but work together really well.”

Finally, Lurz expanded on his sentiments about the Baltimore Touchdown Club.

“The BTC has been great, between promotion of players with both the Super 22 and their all-star games. How they represent football, with a small state Maryland does get recruited very well. They held a clinic last year which was a great place to network and learn. They just do a wonderful job of promoting and protecting the game. We are even seeing expanded playoffs and a lot of BTC guys did a lot of work for that.”